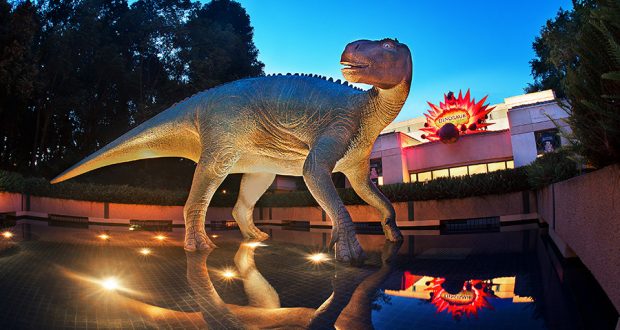 There’s a series of small drops throughout this log flume ride, but the main thrill in Splash Mountain (unless you find singing, animatronic animals particularly thrilling) is the 50-foot drop at the end of the attraction.  It’s exhilarating, especially at night!  As its name suggests, you will get splashed, and if you’re in the front, you may end up drenched.

The fastest ride in Walt Disney World, Test Track reaches speeds of 65 miles per hour! You’ll design a custom car, and then test it in four categories: capability, efficiency, responsiveness and power.  From lightning strikes and inclement weather skidding, to accelerating around nerve-wracking switch-backs, to evading an oncoming 18-wheeler, there are thrills at every (literal and figurative) turn in the nearly mile-long track!

While it won’t have you screaming and holding on for dear life, Soarin’ does raise you 40 feet in the air to soar high above the world’s most beautiful landscapes, so it takes a spot in this list.  Soarin’s 180-degree IMAX technology allows you to feel like you’re hang-gliding at a dizzying height, and the ride was recently updated to include more panoramic locations. There are also several fun scents released throughout the ride, to make your experience even more realistic!

Take a ride on the “fastest hunk of junk in the galaxy”! Star Wars fan or not, riding in the cockpit of the Millennium Falcon is an experience not to be missed. This interactive attraction is located in Disney’s Hollywood Studios’ newest land, Star Wars: Galaxy’s Edge. With roles including pilot, gunner, and engineer – everyone must work together to reach their destination despite a few hiccups along the way.

Who’s up for a ride on Slinky Dog Dash at Hollywood Studios? Toy Story Land makes guests feel as if they’ve shrunk down to the size of toy and are exploring Andy’s backyard with his beloved toys. Slinky Dog coaster has smooth dips and turns! This is a great family-friendly coaster that is sure to be a favorite after just one ride. Have a blast with the breeze in your hair… just don’t forget to look around at all the awesome sights you’ll see across Andy’s toy-filled backyard.

As you search for an Iguanodon on Dinosaur, you’ll bump and speed along a hazardous Cretaceous trail, escaping dinosaurs as you go.  The scariest element of the ride is the Carnotaurus, a huge, roaring, spiky carnivore made even more terrifying by strobe effects.  We dare you to keep your eyes open for the whole ride (your ride photos will tell the truth!).

While it may be a stretch to call this a “thrill ride”, Big Thunder Mountain Railroad nonetheless is a high-speed, “rollercoaster-type” ride that has some drops and bumps, as well as some indoor sections that occur in the dark.  It’s perfect for those who don’t typically like thrill rides.  And to up the thrill factor, try riding at night!

The thrills on Space Mountain are mostly due to the fact that it takes place in the dark.  Sure, you’ll see some planets and stars lit up in the dark, but you won’t be able to see where you’re hurtling to next, which is what gives this ride its scare factor.  As anyone who’s ridden will know, its relatively unimpressive top speed (27 miles per hour) seems much, much faster (and more terrifying) in the dark!

This ride is the tallest ride in Walt Disney World, and that’s just the start of the thrills!  You’ll reach speeds of 60 miles per hour, and drop a harrowing 80 feet.  And you haven’t seen anything yet: after realizing the tracks in front of you have been ripped up, you’ll be suddenly thrown backwards into darkness at hair-raising speeds.  Despite our love for the ride’s resident Yeti, we admit this is by far the most thrilling part of the attraction!

One of the most controversial Disney rides, Mission Space is perhaps the most intense ride on property.  It uses a centrifuge to make you feel a sense of weightlessness (you’ll experience 2.5 Gs), to simulate being in space.  The ride now includes motion sickness bags, and Disney has added a second, gentler version of the ride that uses a simulator instead of a centrifuge, for those looking for a slightly tamer thrill ride.

One of the tallest rides at Walt Disney World, at 199 feet, Tower of Terror is true to its name, and delivers a terrifying ride experience.  Surprisingly enough, during those death-defying drops that have you screaming in delicious terror, you are actually plummeting at a faster speed than if you were freefalling – 39 miles per hour, to be exact!

The thrills in Rock ‘N Roller Coaster just keep coming!  Your vehicle takes off at an unbelievable 60 miles per hour, speeding through traffic and swerving upside down as you head to your concert.  Throughout it all, you’ll hear Aerosmith tunes blasting in your ears through a state-of-the-art sound system.  You’ll want to hang on for this one!