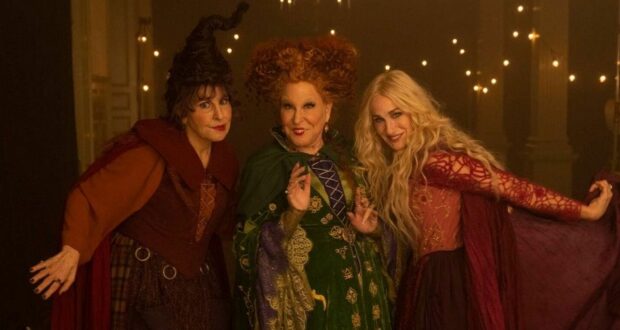 It’s crazy to think that after 28 years, we’re still talking about a cult classic film that fans simply can’t get enough of! That’s right, Hocus Pocus may have landed as a Halloween classic in 1993, but years later, Hocus Pocus fans are eagerly anticipating a Hocus Pocus sequel currently called, Hocus Pocus 2. One Sanderson Sister recently took to social media to provide a film update!

Disney confirmed that a Hocus Pocus sequel would be making its way exclusively to Disney+. While details were few and far between, we did learn that production began in October 2021. It was also confirmed that each of the Sanderson Sisters would be making a return including Bette Midler as “Winifred”, Sarah Jessica Parker as “Sarah”, and Kathy Najimy as “Mary” where they would reprise their cast roles as the child hungry witches in the sequel.

The storyline according to IMDb goes, “Three young women accidentally bring back the Sanderson Sisters to modern-day Salem and must figure out how to stop the child-hungry witches from wreaking havoc on the world. The world may have been free of Winifred, Mary, and Sarah and the fear they invoked in us all, but what happens when you mess with magic? It messes back.”

As filming began, footage leaked showing what seemingly will be a flashback to when the Sanderson Sisters were children!

And now, we’re learning from one Sanderson Sister that Hocus Pocus 2 has officially completed filming! @BetteMidler took to Twitter to share, “THAT’S A WRAP!!!!”

The tweet has over 14k likes which is no surprise as Hocus Pocus fans are counting down the days until the Sanderson Sisters return!

Hocus Pocus 2 will be released in Fall 2022, just in time for Halloween! Is anyone else super excited to watch this new Disney+ film this Halloween season? Bring it on Disney+!