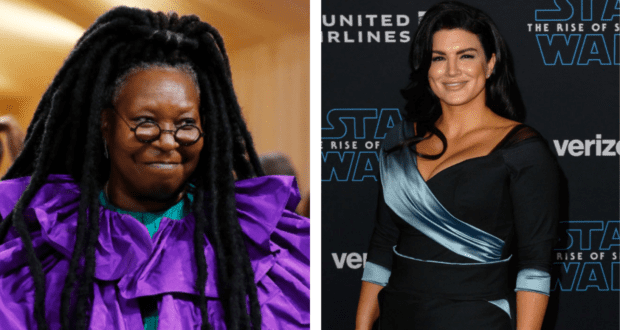 Actress Gina Carano from the Disney+ series The Mandalorian isn’t happy about Whoopi Goldberg’s suspension either.

Goldberg was suspended for two weeks by ABC New President Kimberly Godwin after Goldberg made comments on Monday’s episode of ABC’s The View, saying the Holocaust was “not about race,” but rather about “man’s inhumanity to man,” which led to an immediate outcry online.

RELATED: Gina Carano rumored to be returning to “The Mandalorian”

No @WhoopiGoldberg, the #Holocaust was about the Nazi’s systematic annihilation of the Jewish people – who they deemed to be an inferior race. They dehumanized them and used this racist propaganda to justify slaughtering 6 million Jews. Holocaust distortion is dangerous. #ENOUGH https://t.co/koS1kuspqV

Goldberg’s co-hosts are reportedly unhappy about the decision on ABC’s part to take disciplinary action against Goldberg, and some fans of The View are angered by Goldberg’s suspension, some threatening a boycott of the series citing the news network’s “double standard” in suspending Goldberg for her comments while a former co-host, Meagan McCain, never received similar consequences for comments she made over the years than some felt were inflammatory.

But others, like actress Gina Carano, who was fired by Disney for comments she made referring to the Holocaust feel there’s been a “double standard,” but from a different angle.

Last February, Carano was fired from her role as Cara Dune on Disney+’s The Mandalorian for comments she made in an Instagram post, which read:

“Jews were beaten in the streets, not by Nazi soldiers but by their neighbors… even by children… Because history is edited, most people today don’t realize that to get to the point where Nazi soldiers could easily round up thousands of Jews, the government first made their own neighbors hate them simply for being Jews. How is that any different from hating someone for their political views?”

“Gina Carano is not currently employed by Lucasfilm and there are no plans for her to be in the future,” a Lucasfilm spokesperson said in a statement regarding her termination. “Nevertheless, her social media posts denigrating people based on their cultural and religious identities are abhorrent and unacceptable.”

Carano has taken to Twitter this week to give clarity to her Instagram post from February 2021, to show her support for the Jewish community, and to call for “conversation over cancellation.”

Carano tweeted that she never once said that “Republicans were being treated like Jews in the Holocaust.”

Have journalists completely given up on research?

Nowhere did I say Republicans were being treated like Jews in the Holocaust.

I shared a meme, I translated into: Don’t let the government pit you against each other or history tells us that could go wrong https://t.co/drNTkbJEyI

Carano also tweeted about her support for the Jewish community, saying that last year, when she was fired by Disney for her comments, it was a Jewish man, Ben Shapiro, who reached out to her.

I want to send blessings & love out to the Jewish community. ❤️
When I was being smeared, cancelled & misunderstood, it was a Jewish man @benshapiro who reached out & asked if I’d like to talk about it.

Maybe @WhoopiGoldberg could talk to Ben.

RELATED: Gina Carano has reportedly apologized to Disney for her comments online

2022-02-04
+Becky Burkett
Previous: What I Would Do Locked in Animal Kingdom Overnight
Next: Want to Work at The Happiest Place on Earth? Disneyland Is Hosting Another Job Fair