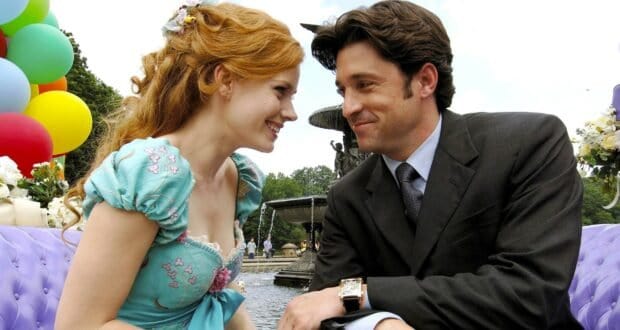 It’s hard to believe Disney’s Enchanted film debuted 14 years ago in 2007! The film was a success as many Disney fans enjoyed its sweet message of hope and true love as a Princess visiting the real world in New York only to encounter one expected twist after another… all resulting in her understanding of true love. Princess Giselle (played by Amy Adams) was a ray of sunshine while other casts including the evil queen Narissa (played by Susan Sarandon), divorce lawyer Robert Philip (played by Patrick Dempsey), and Prince Edward (played by James Marsden) all played a huge part in the success fo the film. Without a doubt, an Enchanted sequel directed by Adam Shankman is expected to do well, especially with the intriguing title of “Disenchanted”. First announced at Disney’s Investor Day in 2020, do know Disney’s Disenchanted will be arriving exclusively on Disney Plus. And if you couldn’t get enough of the singing and dancing in the first “Enchanted”, get ready because “Disenchanted” will have you warming up your vocal cords and jumping off the couch in no time.

As shared by The Hollywood Reporter: “While making an appearance on The Tonight Show Starring Jimmy Fallon on Thursday, Amy Adams offered an update on the Disney+ sequel, titled Disenchanted, which was filmed this summer. “We filmed it in Ireland,” Adams, who plays the princess from Andalasia in the film, shared with Fallon. “Everyone is back. We also have great additions to the cast. We have Maya Rudolph. She plays the ‘baddie,’ so we get to have a lot of fun together.” Adams when on to share, “There’s a lot more singing and a lot more dancing which was humbling. The last time I really danced as much as I’m required to dance in this, I was in my 20s and now I’m not in my 20s. It feels different in your 40s. In my heart, I look like I’m in my 20s when I’m dancing, and then I would watch playback and be like, ‘Whoa, that’s not the same.’”

RELATED: Disenchanted Pair (Dempsey and Adams) in Ireland For Filming

Check out the interview about the Disney movie with Amy Adams below on The Tonight Show below:

Eek! We simply can’t wait! While no release date has been announced yet for Disenchanted, we do know other extraordinary Cast like Idina Menzel, James Marsden, Maya Rudolph, Yvette Nicole Brown, and Jayma Mays will be returning. While film details are limited, we do know a synopsis as shared via DisneyWiki states: “The story is set ten years after Enchanted. Giselle, Robert, and Morgan have since moved from New York to the suburbs. When Giselle begins to question her happily ever after, she wishes her life was more like a perfect fairy tale. However, her wish turns both her real life and her animated home of Andalasia upside down.” We’ll keep you posted as we learn more about this exciting new film which is expected to release sometime in 2022. Bring on the news songs and dance!