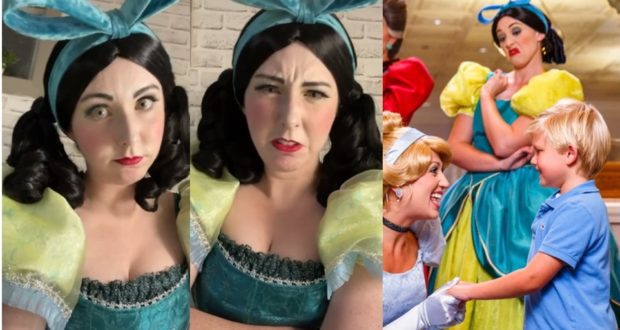 You never know what is going to go viral next with social media! When it comes to TikTok, so far we’ve seen the “Free Shirt Hack” go viral as guests received free Disney shirts for dressing inappropriately. We’ve also seen the gorillas at Disney’s Animal Kingdom go viral as a snake entered their yard. And now, a former Disney Cast Member is going viral for making a Disney adult cry with currently 8.1 million views!

Have you ever experienced Disney’s 1900 Park Fare dinner located at Disney’s Grand Floridian Resort & Spa? While this restaurant and dining experience has yet to return after closing in 2020 due to COVID, you may remember “Cinderella’s Happily Ever After Dinner”. This buffet-style dinner was a fun experience, especially because of the special character appearances. Of course, the beloved Cinderella would always make her grand appearance, but you’d also have a chance to see some Disney villains – Cinderella’s evil stepsisters… Anastasia and Drizella.

Former Disney face character cast member, @magicalgirlmelanie, took to TikTok – dressed as Drizella – to share an experience she encountered with a Disney guest in her clip, “I made a Disney adult cry.” Check it out below:

Ok, so next time, we hope the poor lady speaks up and takes her autograph book back! A simple NO would have done the trick. At the same time, if you’re new to Disney and don’t know how villains can stir up all sorts of trouble, the Disney guests may have just thought Drizella was joking… until she actually signed. What’s going to go viral next, Disney fans? Your guess is as good as ours!

2021-07-21
Jamie Sylvester
Previous: End of 2021 Should See Both “Hawkeye” and “Ms. Marvel”
Next: More Entertainment Returns to Walt Disney World Next Month!