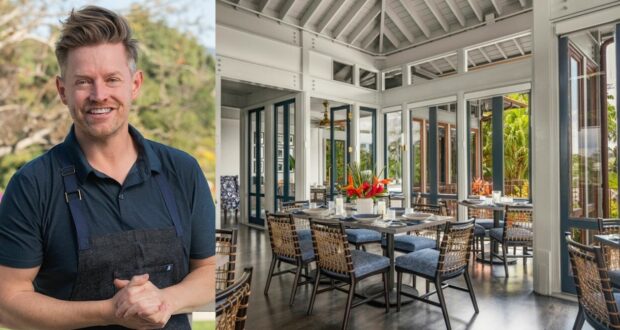 Hello, Disney fans! Take note that a new restaurant is in the works, just 10 minutes from Walt Disney World Resort. What makes this restaurant extra special? It will be acclaimed Chef Richard Blais’ first Orlando restaurant! The restaurant is scheduled to open later this year with a new tropical concept debuting at the Hyatt Regency Grand Cypress, located adjacent to Walt Disney World.

Celebrity Chef Richard Blais is widely recognized as the first winner of Bravo’s Top Chef All-Stars and recently announced co-star of the new Gordon Ramsay / FOX cooking competition, Next Level Chef. He is a graduate of the Culinary Institute of America and trained at The French Laundry, Daniel, Chez Panisse, and el Bulli. His new Orlando restaurant will make its home in the former Hemingway’s venue within the Resort and offer dinner nightly and Sunday brunch.

RELATED: Chef Art Smith’s Homecomin’ Has Donuts & We Can’t Get Enough of Them

Blais currently owns and operates Trail Blais, a forward-thinking culinary consulting company that has consulted on, designed, and operated popular eateries across the country. He is the James Beard Award-nominated author of Try This at Home: Recipes from My Head to Your Plate, as well as his second cookbook, So Good. Most recently, he opened Ember & Rye at the newly renovated Park Hyatt Aviara in Carlsbad, California, and took on the role of Culinary Director at the newly opened San Diego Symphony performance space, The Rady Shell at Jacobs Park.

“It’s undeniable how talented and invigorating Chef Blais is. We couldn’t be more excited to be working with him for our newest restaurant,” said Hyatt Regency Grand Cypress General Manager Paul Joseph. “This concept is something very near and dear to our hearts and to Blais’s and we can’t wait to be able to unveil it to our Guests.” “I love having fun with my concepts and menus and I’m so excited about what we’ve got in store for this restaurant at the Hyatt Regency Grand Cypress,” said Chef Blais. “We’re looking forward to adding a memorable and innovative offering to Orlando’s already incredible food scene.”

RELATED: Exploring Orlando Outside of Walt Disney World: 10 Activities Outside the “Disney Bubble”

What do you think Disney foodies? Will you be making to visit this new restaurant? Hopefully, we’ll learn of an opening date soon! Keep up with the new restaurant details here. Happy planning, Disney fans!