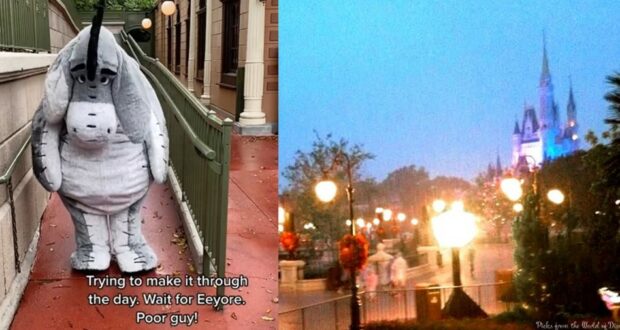 You’ve planned and budgeted and prepared for the most magical trip to the Disney Parks… all to be met with weather that simply doesn’t want to cooperate. We’ve all had those rainy days in the office and while it’s an easy thing to get down about, a rainy day in the Disney Parks isn’t all that bad! Well, Eeyore may not agree with us.

RELATED: Wanna stay the night in this adorable Winnie-the-Pooh ‘BearBNB’? We do too!

When inside Magic Kingdom Park and looking up at the train station, Guests can go to the right (near the Popcorn Stand), next to City Hall, to find a ramp the characters use to leave the train station. Here’s one video below of when we spotted Mickey and friends dressed in their 50th Anniversary finest exiting down the ramp:

In this case, Winnie the Pooh and his best pals can be seen exiting. Eeyore’s viral video shows what looks like a rainy day at Magic Kingdom. As the Winnie the Pooh characters exit, Eeyore seems to have had a rough day… as usual. The video is so adorable that it currently has over 1.4 million views on TikTok and counting! @scottvirzi5 shared the video with the note, “Rainy day at Disney” and goes on to say, “Trying to make it through the day. Wait for Eeyore. Poor guy!”

The excited Rabbit, Tigger, Winnie the Pooh, and Piglet all hurry on down the ramp as happy as can be. But you’ll need to wait a minute for Eeyore as he is slow to join his Winnie the Pooh friends. Check out the sweet video below, or find it here:

2022-01-17
Jamie Sylvester
Previous: Bob Saget’s tell-all memoir may answer questions about the cause of his death
Next: PIXAR’s upcoming release won’t ever see the inside of a theater, but that might be a good thing