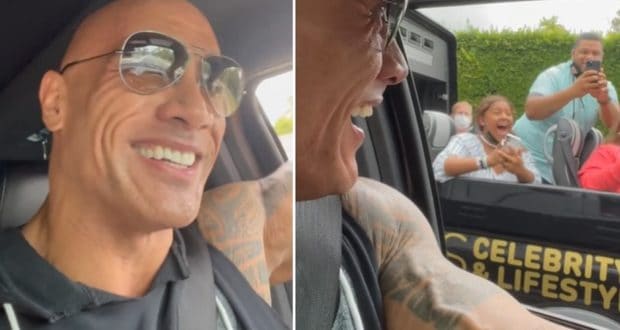 If there is one actor right now that seems to be winning over hearts everywhere – it’s Dwayne JohnsonDwayne ‘The Rock’ Johnson became a fan favorite in the Disney realm when he voiced the spirited demi-god Maui in Disney’s Moana movie. His personality shined through the character! But, well before Johnson was a demi-god, he was already well-known as a professional wrestler called “The Rock”, which he has since retired from but keeps around the name. And now, ‘The Rock’ Johnson is one of the highest-grossing and highest-paid actors! Dwayne Johnson recently worked with Disney for the Disney+ series, “Behind The Attraction” which we quickly binge-watched. His most recent acting gig with Disney was the extremely popular Jungle Cruise film in which Johnson played skipper Frank Wolff. Given all his success, it’s no surprise, that when Johnson decided to pull up next to a Hollywood tour bus, fans went wild!

Recently, Johnson posted on Facebook thanks to all of Disney’s Jungle Cruise fans for their support of the film. Johnson says, “Just swoopin’ in to say THANK YOU for another great weekend at the box office for JUNGLE CRUISE. Over a 4 week period, our numbers have been fantastic as we’re poised to cross $100M at the box office here in the US alone and you’ve already made Jungle Cruise the biggest family blockbuster of the year worldwide!!! THANK YOU. And JUNGLE CRUISE is also available right now in your living rooms on Disney+ because as you guys know ~ I’ll always provide options for you and your families to enjoy my movies however you’re comfortable during this challenging pandemic. Our families come first. Love and appreciate you and GO JUNGLE CRUISE. dj”

RELATED: Dwayne “the Rock” Johnson for President in 2024?

In the midst of his acting fame and thanking fans via social media, the Jungle Cruise star still took a moment to surprise the heck outta people – a Hollywood celebrity tour bus filled with star-struck fans! Good Morning America shared the video (that Johnson previously posted to his Instagram page) via YouTube: “Dwayne “The Rock” Johnson gave a bus full of tourists the surprise of their lives when he rolled up next to them and said hello.”

Can you imagine being a lucky fan to spot Johnson? We love it! We know he made those Hollywood sightseers day with that quick hello in his usual charming way! Did you know Dwayne Johnson was named the “most likable guy in the world” not too long ago? With moments like this – we can see why!

2021-08-26
Jamie Sylvester
Previous: What’s going on with Primeval Whirl? New permit filed for work to be completed
Next: New Special “50 Years of Walt Disney World” to Air on ABC