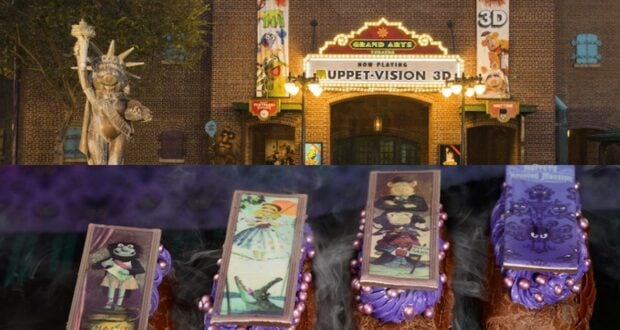 “Prepare to scream… and stream!” An all-new Disney Plus original special is coming on October 8 for a little Halloween fun and we’re counting down the days! “Muppets Haunted Mansion” will be making a SPOOKtacular entrance on screens across the globe, but get this… the Walt Disney World Resort Parks are getting in on the action as well! Soon you’ll be able to enjoy a special Magic Shot with a Disney PhotoPass Photographer in front of the Haunt Mansion at Magic Kingdom Park beginning October 8. This special Magic Shot includes none other than Miss Piggy as Madame Pigota (AKA Madame Leota). But, that’s not all! Disney’s Hollywood Studios is offering two special celebrations for the new terrifying tale that we simply can’t wait to experience.

As shared by Disney Parks Blog: “Available now at PizzeRizzo at Disney’s Hollywood Studios, you’ll want to try one of four different and delicious eclairs, some of which were inspired by the Muppets stretching portraits featured in “Muppets Haunted Mansion.” PizzeRizzo is a quick-service restaurant located in the Grand Avenue portion of the Disney Park. Here you’ll find pizza, meatball subs, or antipasto salad. The friendly neighborhood joint is run by Rizzo, the wise-cracking Muppet. Check out the enticing photo of the new eclairs below:

Also at Disney’s Hollywood Studios, Disney has announced that starting on Walt Disney World’s 50th Anniversary, October 1, Guests will be able to see exclusive content from “Muppets Haunted Mansion” in the pre-show for Muppet*Vision 3D, also located in the Grand Avenue portion of the Park. Muppet Vision 3D is a classic Disney’s Hollywood Studios attraction set in the replica of the Muppet Theater from the classic television series, The Muppet Show. As the curtain rises, Kermit, Miss Piggy, and the whole Muppets menagerie appear in eye-popping 3D. Get ready as they take you on a zany tour of their lab and showing off their new movie-making invention: Muppet*Vision 3D. We’re looking forward to seeing the pre-show featuring the Muppets newest project, “Muppets Haunted Mansion.”

Anyone else eagerly awaiting the arrival of “Muppets Haunted Mansion” on Disney Plus? Be sure to stop by Disney’s Hollywood Studios for the new pre-show at Muppet Vision 3D, then head across the way for a bite or two of the special eclairs from PizzeRizzo. Have a SPOOKY fun time, Disney fans!