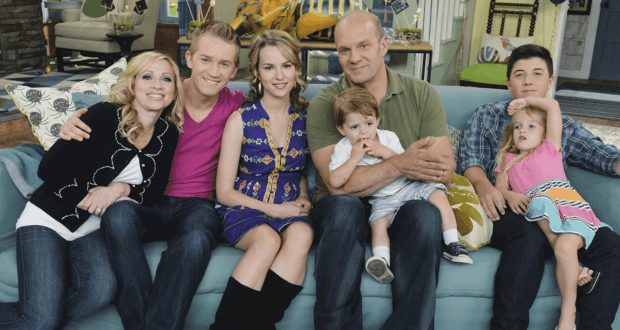 Launching back in 2010, “Good Luck Charlie” was a Disney Channel television shows fan-favorite for years. With kids at home, we watched every episode multiple times as our family enjoyed the comedic family antics of the Duncan Family. The Duncan family was relatable, hilarious, and always ended the show with a positive message. Amy Duncan is played by Disney actress Leigh-Allyn Baker, in the role of a busy mom and nurse. As of recently, the Disney Channel mom has been making headlines for an anti-mask speech she gave at a school board meeting.

With COVID 19 cases on the rise, we’re seeing more and more discussion about mask and vaccination requirements. As of recently, Walt Disney World removed the requirement to wear a face-covering while in outdoor theaters, queues, and attractions. Disney’s mask protocol still states however that masks indoors are required throughout Walt Disney World property. Disney has also recently made the COVID 19 vaccination mandatory for all Disney Cast Members, as well as currently requiring vaccinations for all Guests setting sail with the Disney Cruise Line. With so much discussion about masks and vaccinations across the globe, it’s no surprise that a Disney star would be noticed when speaking out against masks.

A video recently surfaced of former Disney star Leigh-Allyn Baker in Williamson County, Tennessee in which some headlines are calling an “anti mask rant” at a Tennessee school board meeting. Baker addressed the school board during a mask mandate discussion in which she shared masks should not be required. The response has been somewhat mixed across social media such as Twitter and Facebook, but Baker is standing her ground and responded to the criticism.

As reported by FoxBusiness: “Baker is not worried about being “canceled” following a recent video surfacing of her criticizing mask mandates at a school board meeting. “[The response has] been everything from ‘you’re a hero’ to ‘you’re an evil villain,’” she said on FOX Business’ “Varney and Co.” “I mean, it’s run the gamut.” “I was canceled last July already for telling Joe Biden that masks aren’t law, that they’re an overreaching suggestion,” she told host Stuart Varney. “They can’t cancel me twice. Or maybe they can try.”

During the school board anti mask speech Baker said she left her acting career in California behind for “freedom,” as a “California refugee”. She says she has been welcomed with “the most loving, kind, open arms” now that she resides in Tennessee. “There is a movement of people that want to make movies that are family-friendly, that put the child focus first, that are faith-based, and they are [welcoming] me with open arms and I can’t wait to join forces,” she said. “I’ve been taking this up with restaurants that I go to and schools and everywhere because my children need to see my face when I talk to them,” she told FOX Business. “They need to see each other’s faces and their teacher’s face so that they can fully learn and comprehend and express themselves.”

ENews shared via YouTube portions of the video of Leigh-Allyn Baker’s addressing the Williamson County Board of Education in an effort to reject the masking protocol as shown below:

Despite Baker’s efforts, the Williamson County Board of Education approved that the school district requires a temporary mask mandate. Baker says, “I homeschool my kids because I don’t even want to put them near the clown show.”