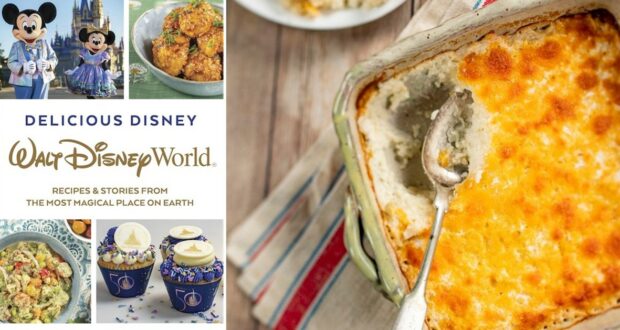 Disney Reveals One Recipe Before 50th Anniversary Cookbook Is Even Available!

Time to put on that chef hat, thrown on the apron, and call in the family! If you’re a Disney foodie, you understand our excitement for a NEW Disney recipe reveal. With just days until Walt Disney World’s 50th Anniversary, Disney is dishing out a delicious recipe from their 50th anniversary inspired cookbook… before it’s even available for purchase! Walt Disney World food, from the past and present, will soon be available with the new book, Delicious Disney: Recipes & Stories from the Most Magical Place on Earth by Pam Brandon, Marcy Carriker Smothers, and The Disney Chefs.

Today Disney is revealing the recipe for the signature Empress Lilly Au Gratin Potatoes! The recipe comes from Delicious Disney: Recipes & Stories from the Most Magical Place on Earth will be available exclusively at shopDisney.com and Walt Disney World beginning Sept. 28, 2021, just in time for “The World’s Most Magical Celebration.”

Ready for a story to go along with the recipe? Disney Parks Blog shares, “Today we’re giving you a sneak peek at one recipe you can find in the cookbook: the Empress Lilly au Gratin Potatoes. The Empress Lilly Riverboat, moored on the shores of what is now Disney Springs, was named for Walt’s wife Lillian, affectionately known as Lilly. The Riverboat welcomed Guests for the first time on May 1, 1977, and Lilly attended the location’s dedication with five of her and Walt’s grandchildren. The Empress Lilly included three restaurants and a jazz lounge, with the Empress Room being the most elegant dining experience at Walt Disney World at the time. The Empress Lilly closed on April 22, 1995, and is now home to Paddlefish at Disney Springs.” Check out the recipe below!

RELATED: Start on a Journey of Deliciousness with the Galactic Baking Cookbook

Click here for a print-at-home version of this recipe!

Best of luck working up this delicious dish in your kitchen! Amazon describes the Delicious Disney: Walt Disney World: Recipes & Stories from The Most Magical Place on Earth as “Walt Disney World honors its fiftieth anniversary with “The World’s Most Magical Celebration,” an incredible 18-month event that begins October 1, 2021. As part of the festivities, Delicious Disney: Walt Disney World is a holistic look at the Florida Resort’s culinary past, present, and future―all organically woven around diverse recipes from the Disney Chefs and fit for home chefs of varying skill levels.” It is currently available on Amazon Prime for pre-order for $31.50 and will be released on April 5, 2021. If you simply can’t wait that long, Delicious Disney: Recipes & Stories from the Most Magical Place on Earth will be available at shopDisney.com and Walt Disney World beginning Sept. 28, 2021. Happy cooking (and dining!), Disney fans!

50th anniversary delicious disney Disney Dining disney foodies disney recipe recipes 2021-09-23
Jamie Sylvester
Previous: Get Ready! EPCOT’s Newest Attraction Added to My Disney Experience Virtual Queue
Next: Who in the world (or 220 miles above it) would pay these prices for lunch?