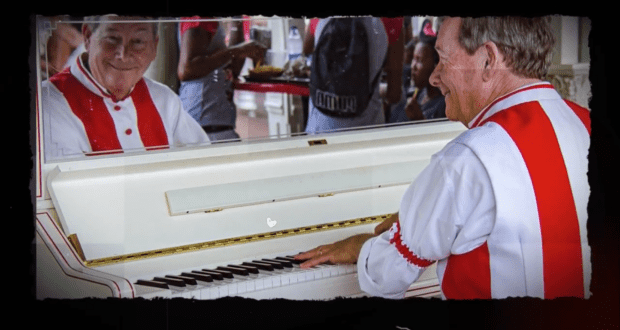 Hard news to share as we have learned a Disney-fan favorite, Mark Anderson, has passed away at 66 years old surrounded by his family. He leaves behind sweet memories as shared in the video below.

Disney fans took to Reddit to comment on a post shared by HolleighLujah which notes, “Mark Anderson, incredible pianist, loving husband, father, and recent grandfather passed away from cancer yesterday surrounded by his loved ones. He played piano at various Disney Parks across the world for over 30 years and brought immense joy to countless Guests and music lovers throughout that time. If you are feeling inclined, please leave a note, a flower, or a bay of Cheetos (his family’s favorite) at the piano at Casey’s Corner. Even just prayers for his family would be greatly appreciated.”

Mark’s obituary shared that he passed peacefully surrounded by his family early morning Sunday, January 16, 2022. His family always had the running joke when Mark was young that he would not have to do household chores like his siblings because he had to practice the piano. Thankfully, that piano practice really paid off with a scholarship to Wartburg College where he met his wife, Luralee.

Mark and Luralee formed a variety of bands together until they became part of the performance house band at The Disneyland Hotel where they worked six nights a week in Anaheim, California in 1984. Mark’s musical journey continued with being an entertainer at Tokyo Disneyland. In 1988, Mark started playing the ragtime piano on Main Street, U.S.A. at Walt Disney World’s Magic Kingdom.

Mark was noted as a “man of few words, Mark channeled his love and communication through his musical fingers on the keys of a piano; fun, loud, and pure joy. He dedicated his life to music and making magical memories for countless strangers, friends, and family alike. He loved his family deeply and would be proud to tell you that he is lived on by his talented wife and his daughters, who have pursued a life in music as well.”

Mark shared a video via YouTube in 2020 during the entertainment COVID closures when much of Disney’s entertainment had yet to return. With the video, Mark noted, “COVID-19 has stripped away much but one thing we’re saddened about is the live entertainment all over the world, and personally, here in Central Florida. The theme parks have had to let go some very necessary and needed acts, performers, talent, shows, and memory making specialties.” Take a minute with us and check out Mark’s sweet video below:

Our thoughts and condolences are with the Anderson Family. Mark, you will be greatly missed.