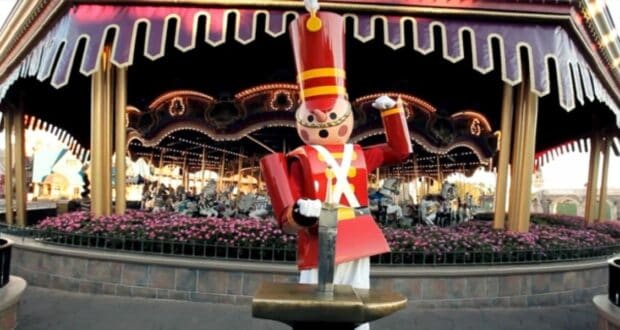 The holidays are in full swing at Walt Disney World Resort! During one of Disney’s recent holiday parties, Disney Park fans captured video of a parade performing giving an emergency signal, and quickly being escorted away.

Mickey’s Very Merry Christmas Party is back and better than ever at Magic Kingdom Park. With the special-ticketed after-hours event now sold out, fans with the popular tickets are thrilled to ring in the holidays with Mickey Mouse and friends.

One of the fan-favorite experiences at Mickey’s Very Merry Christmas Party is the incredible parade held during the event. The Once Upon a Christmastime Parade travels the usual Magic Kingdom parade route through Frontierland, Liberty Square, past the Cinderella Castle hub, and straight down Main Street, U.S.A.

One of the iconic portions of the parade is the vast amount of Toy Soldiers that march in unison through Magic Kingdom. With their red and yellow costuming, they can’t be missed as Disney fans cheer on their arrival.

But, a recent video shows one Toy Soldier in a state of emergency. The Cast Member gives an emergency signal and is quickly escorted from the parade. Check out the video below posted by @thatlocaltourist:

Did you catch the Toy Soldier’s hand signal?

Former Disney Cast Member @sarahdanielstv shares that when a Cast Member puts one hand over the eye and one up in the air, this is a distress call that something is wrong. Check out the video below:

This isn’t the first time video has captured a Cast Member giving the emergency signal. Peter Pan and Wendy were playing hide and seek with Captain Hook when Hook gave the signal for help, as shown in teh video below:

Thankfully, the Toy Soldier was spotted by a parade Cast Member and escorted away quickly without causing much of a scene.

While we don’t know what happened to the parade performer, typically, Cast Members will call for help with a wardrobe malfunction, being overheated, or something else that would cause them to need to leave the “stage” quickly.

2022-11-21
Jamie Sylvester
Previous: Chapek’s Firing was a Complete Shock to Many Execs, Including Chapek Himself
Next: Was Disney’s Most Recent Earnings Call the Final Nail In Chapek’s CEO Coffin?