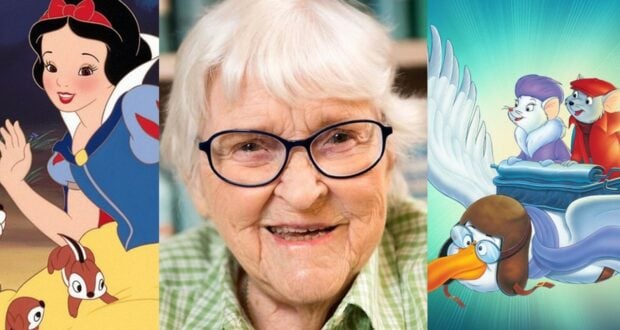 Today we are learning the sad news that Disney Legend Ruthie Tompson has passed away at 111 years old. Ruthie dedicated nearly 40 years to The Walt Disney Company and worked on virtually every Disney animated feature from Disney’s Snow White and the Seven Dwarfs up through The Rescuers, then retired in 1975. Ruthie celebrated her 111th birthday on July 22nd, 2021.

Ruthie was quoted saying “I used to walk by the Disney Bros. storefront,” she once recalled. “I was curious and snooped around, and, finally, they invited me in for a look. After that, I’d visit quite often. I remember sitting on the bench and watching Roy shoot the animated cels onto film.” “Once Roy asked us, neighborhood kids, to play tag in the street, while he photographed us with a movie camera,” she continued. “I suppose it was for the Alice Comedies; he paid each of us a quarter, which I was glad for because I could buy licorice.”

According to D23, Walt Disney offered 18-year-old Ruthie a job as a painter in the Ink and Paint department, where she helped put the finishing touches on the Studio’s first full-length animated feature Snow White and the Seven Dwarfs, which premiered in 1937. She was soon promoted to the final checker, reviewing the animation cels before they were photographed onto film. By 1948, Ruthie again transferred to animation checking and scene planning. As a result of her adept skill at guiding camera movement for animated films, in 1952 Ruthie was invited to join the International Photographers Union, Local 659 of the IATSE. She was one of the first three women to be admitted into the Hollywood camera union.

“Ruthie Tompson’s technical mind led her to be named supervisor of the Scene Planning department at The Walt Disney Studios. There, she helped to establish the camera mechanics used to photograph animated scenes and background art onto film. As Bob Broughton, a Disney Legend and former Disney supervisor of special photographic effects, recalled, “Ruthie was mechanically inclined. She was excellent at figuring out the mathematical and mechanical logistics of camera moves.”

The Executive Chairman of The Walt Disney Company, Robert Iger, took to social media on October 11 to share: “RIP Ruthie Thompson…a true animation legend. Her contributions to Disney—from Snow White to The Rescuers—remain beloved classics to this day. While we will miss her smile & wonderful sense of humor, her exceptional work & pioneering spirit will forever inspire us.”

What an amazing career! Our thoughts are with the Tompson family. Ruthie’s talents will live on through all the classic Disney films we Disney fans know and love.