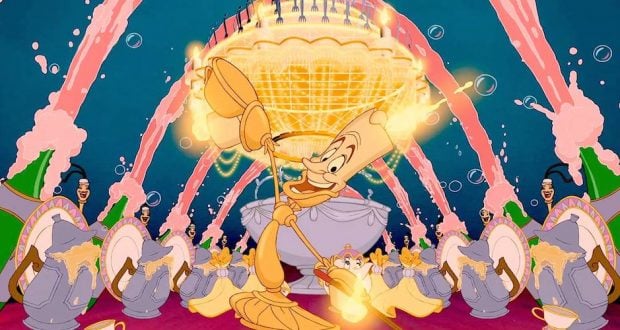 Cheese Souffle – Beauty and the Beast

From the moment Lumiere led the rousing chorus of “Be Our Guest” in 1991. I have been craving a taste of the dishes that danced across the table. This obsession grew when Mickey’s PhilharMagic in Walt Disney World’s Magic Kingdom opened in the early 2000s with a 4D number of you guessed it – “Be Our Guest”! This attraction pipes in scents with this iconic song so you can smell and almost taste the food that adorns Beast’s table. I would love to taste the whole assortment of dishes the kitchen offers Belle, but specifically, I would love to try the fluffy cheese souffle.

The release of Disney’s new film Encanto adds yet another film food to my list. As a cheese fanatic, I am so jealous of Mirabel’s delicious Arepa Con Queso that her mother shares during a tender moment in the film. The melty cheese-stuffed corn cakes are the stuff of dreams. Though this delectable is not on the menu, Encanto fans visiting EPCOT during the Festival of the Arts can visit the Encanto booth to taste other film-themed bites.

Others have mentioned Mushu’s first day in camp breakfast as their must-eat meal from the animated film Mulan. I’m going to have to pass on Mushu’s breakfast and confess that I am dying to try the dumplings from Mulan. You know the ones- Mulan’s dad is silently eating steamed dumplings during the evening meal when the spirited Disney princess Mulan, voices her concern about him joining the army to fight for China.

We have no way of knowing if they are pork, chicken, or vegetable dumplings but either way they rank on the list of Disney film foods I want to try.

Remember when Wiggins disposed of a juicy chicken drumstick after Percy scoffed at the treat? The scene of the large drumstick soaring through the air and into the brush always gives me Magic Kingdom Park Frontierland turkey leg vibes, and honestly makes me hungry. Unlike Percy the pug, I am not too picky to enjoy a good roast chicken drumstick.

Tiana’s Beignets – The Princess and the Frog

Who hasn’t longed for one of Tiana’s beignets when watching The Princess and the Frog? While Tiana is a seasoned cook known by her community for her talent in the kitchen (she is preparing to open a restaurant after all) her beignets are a community favorite so delectable that Charlotte’s father, Big Daddy LaBouff frequents the café where Tiana works to enjoy them regularly.

Charlotte is so convinced they can win over any man that she has Tiana cater a huge tray of them for the Mardi Gras Party to impress Prince Naveen. A golden beignet cooked by a Disney princess, dusted with powdered sugar sounds unbeatable and is a Disney film snack I wish I could eat.

To be perfectly honest, I don’t even know what Crem de la Creme de la Edgar is but that has not kept it from ranking on my want-to-eat list. I imagine it as a cheesy custard crossover as evidenced in the way the kittens and Duchess eat it and the fact that Rupert the mouse chooses to use it as a dip for his cracker. This dish taught us an important lesson about remaining cognizant about whose cooking you choose to eat.

However, all’s well that ends well because by the end of the film the villain Edgar is on his way to Timbuktu. Maybe someday a Disney Park eatery will add Crem de la Creme de la Edgar to the menu – after all, if it’s good enough for sassy Marie, it’s good enough for me.

Tony’s Spaghetti and Meatballs – Lady and the Tramp

The spaghetti scene in Lady and the Tramp is, in a word – unforgettable. The dogs browse restaurants from the array of eateries Tramp frequently visits, before finally settling on Italian cuisine for the evening. The dripping candle, classic red checked bistro tablecloth, and thin breadsticks that adorn the table set the stage for a perfect meal as Lady and Tramp fall in love to the tune of Bella Notte.

Tony serves up the house special spaghetti and meatballs to the pair of love birds (er’ pups). I am a sucker for any type of pasta so this scene makes me hungry. The springy noodles, massive meatballs and saucy mound of pasta on the plate is sheer perfection!

Was Zootopia’s slyest fox Nick Wilde wrong for conning a free jumbo pop out of Officer Judy Hops? Yes. Was the jumbo pop hustle that resulted in adorable “Pawpsicles” that were sold to a huge group of very professionally dressed hamsters brilliant and adorable? Also, yes! An ice-cold “pawpsicle” would hit the spot as a midafternoon snack and is consistently a sweet treat I wish I could try! Though you won’t find a Zooptopia “pawpsicle” in a Disney Park you can still purchase some pretty delicious and refreshing treats to beat the Florida heat.