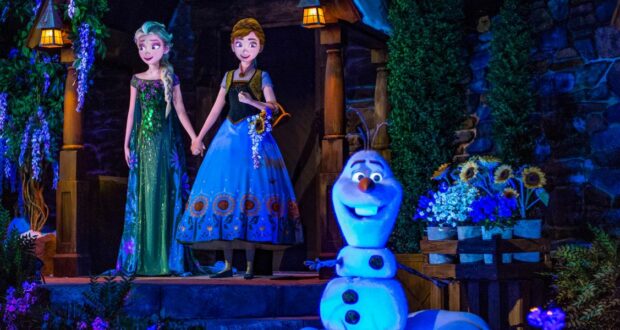 A visit to Walt Disney World Resort should be a memorable vacation filled with unique experiences and magical moments. Instead, one Disney Park Guest found himself in an alarming situation while visiting the theme parks.

EPCOT, the ever-so-popular Walt Disney World destination, is a Disney fan favorite as it boasts attractions, dining, entertainment, and shopping experiences for Guests of all ages. While Guests love the newest thrill-seeking attraction, Guardians of the Galaxy: Cosmic Rewind, in the World Discovery portion of the Park, most of the EPCOT attractions are rather mild in the thrill meter category.

Gentle EPCOT rides such as Spaceship Earth, Journey Into Imagination with Figment, and Gran Fiesta Tour Starring The Three Caballeros are must-do experiences that allow Guests to ride through Disney’s storytelling adventures.

Additionally, in the Norway Pavilion around the World Showcase portion of the Disney Park, Guests will find the extremely popular Frozen Ever After attraction. This mild boat ride has a few dips and drops but is generally known for its smooth ride experience, stunning music, and animatronics from the beloved Disney films, Frozen (2013) and Frozen II (2019).

If you’ve never experienced Frozen Ever After, Disney describes the attraction with:

Find a seat aboard your boat and let the lapping waters take you through a frozen willow forest.

Soon, you’ll be rubbing shoulders with some “boulders”—a.k.a. Kristoff’s family from Troll Valley—before bracing for the cold.

High up in the icy blue world of the North Mountain, Elsa’s enchanting ice palace awaits. Behold the wonder… and keep an eye out for Anna, Olaf and a few more Frozen friends.

This enchanting “Summer Snow Day” celebration—complete with many of your favorite Frozen tunes—is sure to melt even the coldest hearts!

A recent report has been released, however, showing Frozen Ever After (the former Maelstrom location) was at the center of an emergency that took place in October 2022, at the height of the EPCOT International Food and Wine Festival.

According to the report, “At Disney, a 56-year-old man had an undisclosed “cardiac event” after riding the Frozen Forever After boat ride at Epcot in October.” Details surrounding the incident after the Frozen ride have not been released.

With the massive amount of people that fill the theme parks daily, this isn’t the first and sadly won’t be the last alarming incident to take place at Walt Disney World Resort. Not too long ago, a man died after riding the Tomorrowland Transit Authority PeopleMover at Magic Kingdom Park.

The report additionally notes Disney’s neighboring theme park giant, Universal Orlando Resort, had two reports of heart-related issues this last quarter. The report states, “A 40-year-old man had “chest palpitations” on the roller coaster Harry Potter and the Escape from Gringotts in November and a 61-year-old man experienced an irregular heartbeat on the Fast & Furious – Supercharged simulator in December.”

We hope the Disney Guest and Universal Guests fully recovered from the incidents.