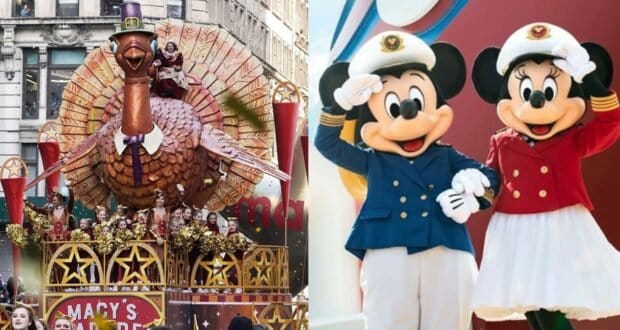 Disney and one of our favorite holiday traditions are colliding in a fantastic way! We previously shared the fun news that Star Wars Baby Yoda, AKA “Grogu,” from the popular Disney+ The Mandalorian series will be featured in a BIG way during Macy’s Thanksgiving Day Parade. Well, now we’re learning that the Disney Cruise Line will also tower above New York City with a new float inspired by the newest ship in the Disney Cruise Line fleet, the Disney Wish!

RELATED: Baby Yoda Gets Big & Will Soar Over NYC on Thanksgiving Day

Disney Parks Blog announced, “There will be an extra sprinkle of pixie dust on the Parade this year as Disney Cruise Line’s brand-new cruise ship float embarks on its maiden voyage in New York City as part of the 95th Macy’s Thanksgiving Day Parade! The imaginatively designed “ship” has been christened “Magic Meets the Sea” and is inspired by the fantastical style of the Disney Wish, which sets sail in summer 2022.”

“Our new float showcases the majesty of a Disney Cruise Line vessel and features iconic design elements including a Mickey Mouse-inspired color palette, towering red funnels, and an intricate filigree motif along the hull. The float will also spotlight 15 favorite Disney friends who represent the stories and experiences onboard the Disney Wish, including Captain Minnie Mouse, Princess Tiana, Aladdin and Jasmine, Cinderella, and more.”

Disney’s fifth ship in the Disney Cruise Line will set sail on the high seas for its maiden voyage on June 9, 2022. In the meantime, get ready to gather your Cruise-loving friends and family and tune in to the Macy’s Thanksgiving Day Parade on NBC-TV on Thanksgiving morning, November 25, from 9 a.m. to noon in all time zones. See you on 34th Street, Disney fans!