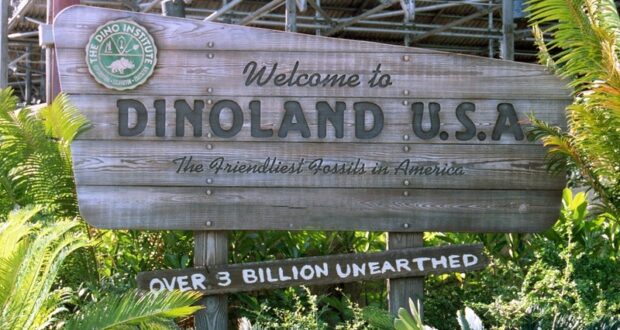 Dinoland USA: You either love it, or you hate it (and let’s be honest, you probably hate it). It’s consistently rated the least popular themed land at Walt Disney World. I’ll admit it: I used to be a Dinoland USA hater too. I found it to lack originality and seemed cheap. I should have had more faith in Disney’s Imagineering. Its cheesy roadside carnival look is entirely on purpose. The backstory is absolutely perfect, and now that I know it, it’s completely changed my outlook on the whole themed land. In my mind it has gone from one of the worst themes to one of the best! Check out the backstory for yourself and see if it doesn’t change your opinion too. As promised in a previous article, what follows is the official backstory retold in my own words:

It’s 1947, somewhere in the Midwestern United States. In a sleepy little spot too small to find itself on any maps, a small fishing lodge stands alone beside a highway (Highway 498, to be exact). The area doesn’t get many visitors, but it does have a gas station (run by an elderly couple named Chester and Hester) not far from the lodge that sells odds and ends to supply travelers on what is sure to be a “just passing through” pitstop.

One day, simply by coincidence, an amateur fossil hunter found a few old bones nearby. Excited for what he hoped was his “big find,” he took the bones to some friends who were paleontologists. They ran the bones through rigorous tests and verified their authenticity. The amateur archeologist had found not only authentic dinosaur bones but pretty rare ones! Excited to complete the important skeleton, the professionals and their amateur buddy formed a team and purchased the ramshackle old lodge and the land around it to search for any remaining bones. Any bones would be lovely, but the team hoped to find a completed skeleton of the rare dino to earn a place in archeological history. Much to their jubilation, they found another bone…and then another… and another. Before long, a skeleton was indeed beginning to take shape!

The area was indeed rich with fossilized bones that were of great importance. It didn’t take long for word of the area’s significance to get around, and soon experts and bright-eyed paleontology students began migrating to the area to study and discover. New dig sites were created, the original being depleted, but they found each new dig site was brimming with bones, and thus the Dino Institute was born.

They created a Dormitory and a cafeteria but struggled for funds. The area’s popularity was picking up, though, so the once desolate place saw an influx of day trippers intrigued by the flurry of activity. The team seized the opportunity and opened the original dig site up for tourists to come poke around. You know it today as the boneyard. They also opened their cafeteria to the public for extra funds. Being science-minded and not at all the creative type, they didn’t put much effort into naming the eatery, simply choosing to call it “Restaurant.”

The area grew, and so did the Dino Institute. From humble beginnings, the institute became renowned and esteemed. The prestige allowed it to expand its educational base, and soon a vibrant student community had sprung up. College kids being college kids, hijinx of all sorts abounded, but none more so than the “osaurus” gag. It became a running joke to write “osaurus” behind everything: Textbooks, road signs, you name it. Finally, one night a group of students decided to pull the ultimate prank! They erected a gigantic wooden sign with “osaurus,” hastily written in large letters. Then, under cover of darkness, they climbed to the restaurant’s roof and affixed it to the sign. The following day everyone woke to see their cafeteria was now named “Restaurant-osaurus.” It was a hit, and the sign was never taken down. (If you look carefully, you’ll notice “osaurus” scrawled throughout the area, never having been removed as a testament to the Institute’s humorous beginning). 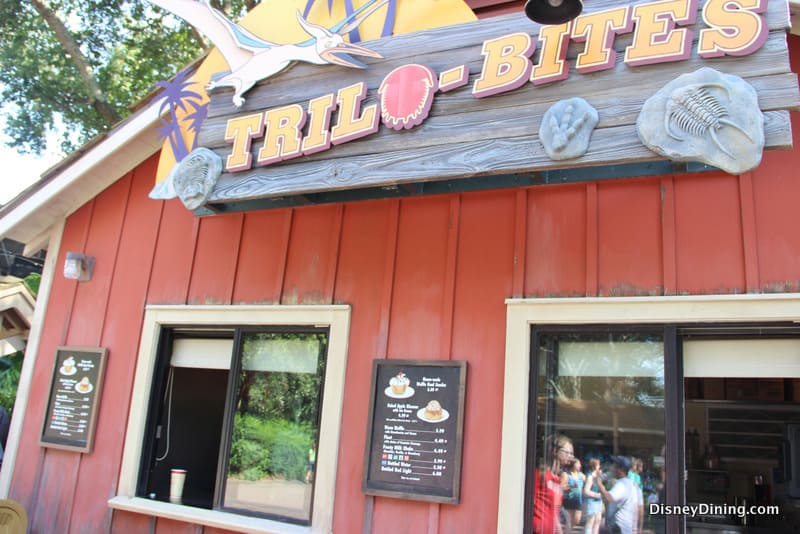 The restaurant did well, as did the other small roadside stands the students built to earn a few bucks. They gave them funny names like “Trilobites,” reveling in the science jokes that would likely unnoticed by passersby

With the influx of cash, the Institute was able to build a shiny new building with the latest technology. An open house is held for the tourists to experience the Institute’s research firsthand. 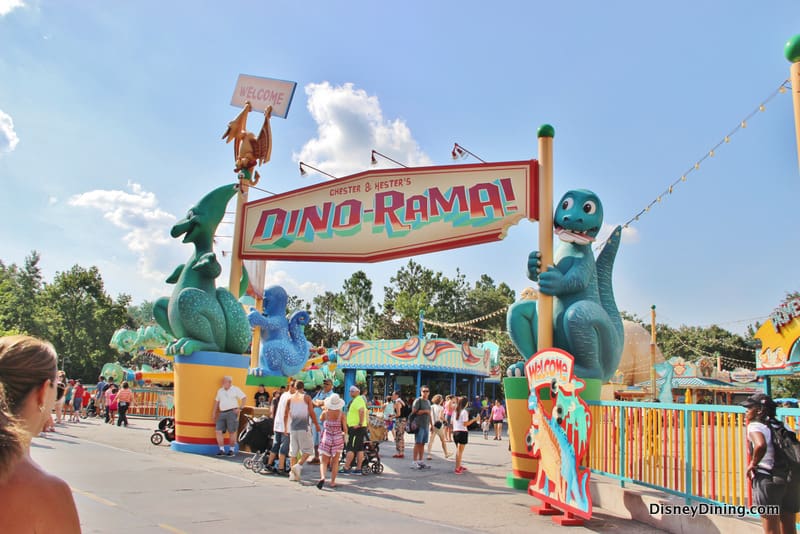 Meanwhile, that elderly couple, Chester and Hester? Never ones to miss out on a money-making scheme, they opened a roadside carnival in a nearby parking lot to take money from err… entertain the day trippers. It wasn’t much, just a little amusement area, much like you’d find traveling around the country at the time, but Chester and Hester ran it with pride until they passed away in the mid-1960s.

Grateful to the Dino Institute for their success, the carnival was left to the Institute to do with as they saw fit. Without much thought at all, they decided to keep it just as it was as a tribute to the couple (and as a way to add even more revenue to fund their research).

And so a tourist trap and a prestigious Science research center grew alongside each other and found success against all odds and became the area we know today as Dinoland USA!

What do you think? Does this change your opinion of Dinoland USA? It certainly did for me. Now one of my favorite things to do at Animal Kingdom is to wander around and find all of the little details about Dinoland that tell the story. They’re all there, but you have to look carefully. From little things like seeing “osaurus” graffiti to Highway 498 signs, right down to the parking space lines in the carnival area, the details are where the story is at in this deceptively themed land! You just have to stop and notice the little things to fully appreciate it. Let us know in the comments if this changes your mind on arguably the least popular land at Walt Disney World!