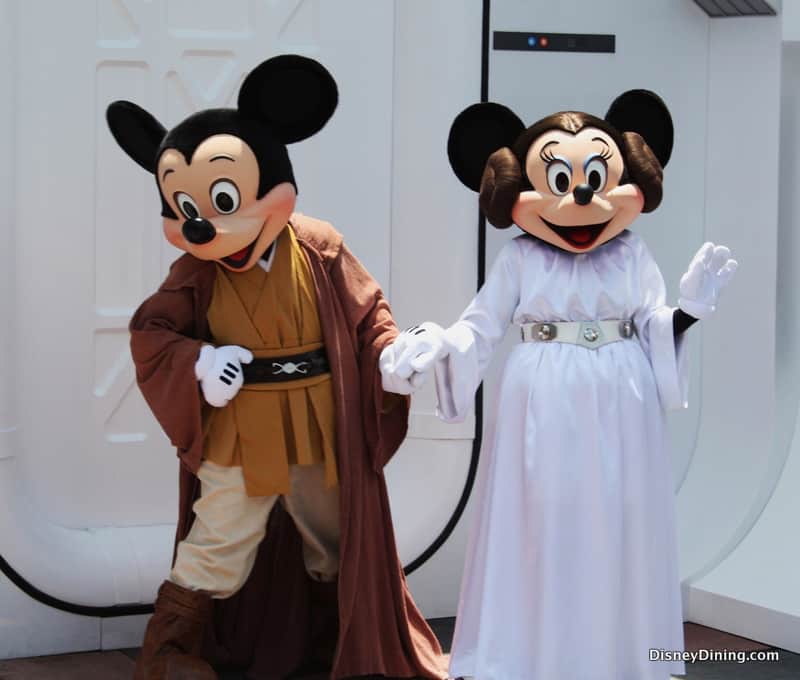 There was a 1978 episode of Saturday Night Live in which Bill Murray, performing as lounge singer Nick Winters, famously sung, “Star Wars…  Nothing but Star Wars… Gimme those Star Wars… Don’t let them end.” At that time, only one Star Wars film had been released, and its full impact on our planet wasn’t fully understood. Today we can better appreciate what the phrase, “nothing but Star Wars” really means. As of 2013, the film franchise has garnered over $4 billion in ticket sales, and that’s not counting revenue from the countless books, video games, and toy sales. What makes them so beloved, perhaps, is that the films have a virtually universal appeal. From intergalactic intrigue to an intimate love story; from epic space battles, to familial drama; from metallic androids, to furry alien teddy bears – there is something in Star Wars that everyone can identify with. Volumes have been written on the cultural impact of the film franchise, but perhaps there is no better place to actually experience it, at a deeply personal level, than at Walt Disney World’s annual Star Wars festival – Star Wars Weekends. There, you will not only have the opportunity to meet your favorite characters from the series, and join with thousands of other fans in exuberant Star Wars revelry, but you’ll also be able to dine on some wonderful sci-fi themed foods and treats.

Star Wars has always had a presence at Disney since 1987, when Disneyland in California opened its space simulator ride, “Star Tours,” which later became an attraction at 4 of Disney’s parks around the globe, including Disney-MGM Studios (now Hollywood Studios). In 2010, the ride went through an imaginative refurbishment, and in May 2011, “Star Tours: The Adventure Continues” opened at Hollywood Studios, which  features all new segments filmed in high-definition 3D, as well as new Audio-Animatronics and enhanced motion simulator effects. In 1997, Disney’s Hollywood Studios began hosting Star Wars Weekends, a celebration of all things “A long time ago in a galaxy far, far away,” which has since become an annual event. Taking place on four consecutive weekends in May and June, coming to this experience has become a yearly pilgrimage for Star Wars fans around the world. This year’s festivities began on May 17th, and run each weekend through June 9th. My family and I attended opening day…

It’s impossible NOT to feel “the Force” as you stroll through Hollywood Studios on a Star Wars Weekend. There are Star Wars banners and signs throughout the grounds, both cast members and guests alike don their Jedi-best, and John Williams’ celebrated score is piped-in through the various speakers. The day really kicked into hyperspace at 11 AM when the Legends of the Force Motorcade and Celebrity Welcome made its way down Hollywood Boulevard. In it, members of both the Rebel Alliance and the Empire marched down the streets, joined by Star Wars celebrities, including Jeremy Bulloch (who played Boba Fett) and Ray Park (who played Darth Maul).

Following the parade, we were hungry for a snack, and made our way over to the Backlot Express. There, we ordered a Kids Power Pack and 2 Darth Vader Cupcakes. The Power Pack is essentially a collection of pre-packaged fruits, vegetables, and assorted snacks that come in an R2D2 bucket that kids can take home as a souvenir. The cupcake is a delicious chocolate treat, packed with peanut butter filling and topped with chocolate frosting and a Darth Vader-shaped chocolate confection. Both the Power Pack and Darth Vader Cupcake are also available at the ABC Commissary, Studio Catering Co., Pizza Planet Arcade, and Sunset Ranch Market.

Following our snack break, we headed over to our favorite ride at the park: “Star Tours: The Adventure Continues.” For the uninitiated, this 3-D motion ride features eleven random films scenes that, when combined, make possible a total of 54 unique ride experiences, giving repeat riders something new to look forward to. During one ride, you may visit the icy planet Hoth and do battle with Imperial AT-AT’s, while on the next, you may be pod racing against Sebulba on Tatooine.

Following our interstellar excursions, we made our way to the Premiere Theater to hear stars of the movies talk about their experiences while filming. The Stars of the Saga in particular was an outstanding multisensory show in which guests were treated not only to a hilarious live-action skit featuring Stormtroopers, but also to special pre-recorded announcements made by creator George Lucas and screenwriter Lawrence Kasdan regarding the event, as well as plans for the next films.

Still other activities throughout the day included autograph signing opportunities with the stars, shopping prospects at the Star Wars-themed merchandise area, “Darth’s Mall,” and interactive events for the Padawans (or kids) in your group.

By dinner time, we were ready to sit down, relax, and eat. We of course wanted to make it an entirely Sci-Fi themed day, so we made reservations at the Sci-Fi Dine-In Theater restaurant, Disney’s retro, 1950’s-inspired take on old-fashioned drive-in theaters. The Sci-Fi Dine-In Theater is the ideal place to eat during Star Wars Weekends, not only because it caters to fans of interstellar kitsch, but it also harkens one back to George Lucas’ earlier classic car-filled film, “American Graffiti.” Here, diners eat in mock-ups of classic cars while enjoying clips of campy monster movies. Really, what more could you ask for? The restaurant takes on a special aura during Star Wars Weekends, as you eat next to guests wearing Jedi robes and Wookie backpacks.

My family ordered appetizers and drinks first: onion rings, which came with a tasty and tangy Horseradish dipping sauce, and couple of “Meteors” – Coca Cola or Sprite products served in special cups aglow from within by color-changing light-up cubes. For an entree, I ordered “The Famous All American Picnic Burger,” which was a flame-broiled angus burger topped with sliced hot dogs, sauerkraut, and onions, and served with fries. The burger was amazing and really captured the taste of a picnic by combining all those great tastes into one bun. My wife ordered the Reuben, which was corned beef, Swiss cheese, sauerkraut, and Thousand Island Dressing on marble rye, and also served with fries. She had commented that it was the best Reuben she had ever eaten. My daughter, on the other hand, wasn’t as thrilled with her dining choice. She ordered the Kid’s Pick macaroni and cheese which, for reasons of blandness, she didn’t care for. The waitress had noticed that she barely touched her meal, and quickly remedied the problem by bringing her out a hamburger – which she devoured. As if we didn’t have enough of the chocolate/peanut butter combo with the Darth Vader cupcake we had for lunch, for dessert we shared the Peanut Butter and Chocolate Cake, which was served a la mode. We’ve eaten here a number of times over the years, and each time, we are impressed with the food, service, and above all – atmosphere. In truth, the prices at the Sci-Fi Dine-In Theater are not much more than a typical Disney counter service restaurant, and where else can you eat in a classic car while watching clips from “Plan 9 from Outer Space?”

Upon leaving the Sci-Fi Dine-In Theater, I ordered a specialty drink, called “The Dark Side,” from a kiosk right outside the restaurant. Pomegranate Lemonade, Parrot Bay Coconut Rum, and Cointreau triple sec. It was a little strong, and sweet, but didn’t sway me to become a Sith Lord. Next time I’ll try “The Force:” Wildberry Lemonade, Grey Goose, and Chambord liqueur.

The evening ended with a fantastic, colorful dance revue called Hyperspace Hoopla, in which everyone’s favorite characters hit the main stage for an outrageous spectacle of comedy and music. This is a treat not to be missed, and be sure to arrive early, as the stage area fills up fast. Standing there among the crowd, cheering to a gyrating Chewbacca, there’s a special, communal feeling you get, as if you’re part of some big, cosmic community brought together by a movie. The force was truly with us.

If you’ll be attending Star Wars Weekends, make sure to check out the official Disney website for the latest announcements regarding special guests and show times, as they change per week. If you’re not going to make Star Wars Weekends this year, don’t short your circuit; you can make any time of the year Star Wars time when visiting Disney’s Hollywood Studios by riding Star Tours and eating at the Sci-Fi Dine-In Theater. Also, be sure to check out the actual holographic chess board used in filming Star Wars: A New Hope which currently appears in the queue for The Great Movie Ride.

My family had a blast at the first Star Wars Weekend of 2013, and we plan to attend each of the 4 weekends this year. And while the Star Wars food choices were limited, with the inclusion of the Sci-Fi Dine-In Theater it’s possible to have a complete other-worldly-themed day. My hope is that they expand the Star Wars offerings in coming years and offer more themed foods and drinks. Maybe someday we’ll even get a Cantina-themed restaurant with “Womp rat-atouille” and “Bantha burgers” on the menu. One can dream, can’t they?

Food: The Star Wars-themed food offerings around the park were limited to kid snacks, alcoholic beverages, and a specialty cupcake, but with the inclusion of the Sci-Fi Dine-In Theater it’s possible to have a completely interstellar meal. It offers well-prepared, all-American classics with plenty of burgers and sandwiches to choose from.

Atmosphere: The entire park is replete with Star Wars theming, from roaming costumed characters, to Star Wars music playing from overhead speakers, to swaying Star Wars banners and signs. The atmosphere at the Sci-Fi Dine-In Theater resembles a 1950’s outdoor drive-in movie theater, with actual cars to dine in. It is one of the most imaginative dining experiences at the park.

Service: The wait staff at the Sci-Fi Dine-In Theater was pleasant and thorough.

Tips: Save Toy Story Midway Mania for another day, and prepare to dedicate the day entirely to Star Wars, making sure to arrive very early for each of the Star Wars-themed shows and events offered throughout the day, as they fill up fast. For the Sci-Fi Dine-In Theater, make reservations for a dining car days or weeks in advance, but if you forget, you can try to get seated as a walk-in, and dine at a “flying saucer picnic table.” 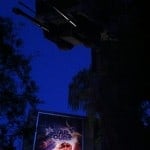 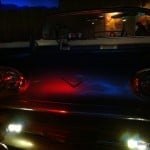 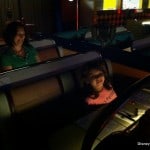 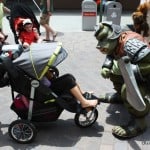 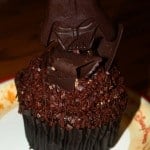 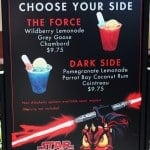 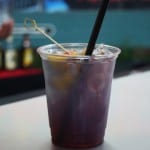 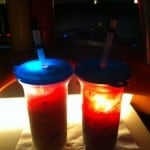 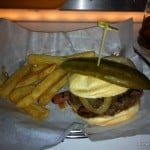 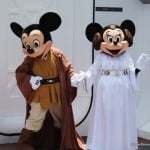 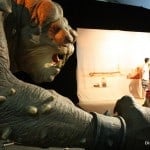 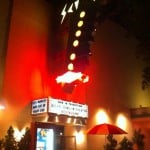 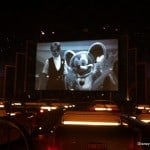 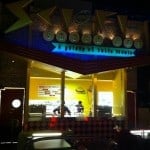 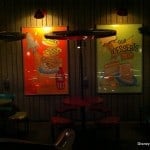 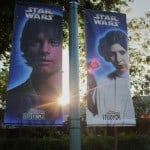 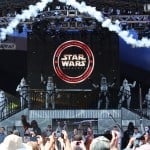 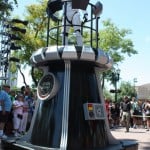