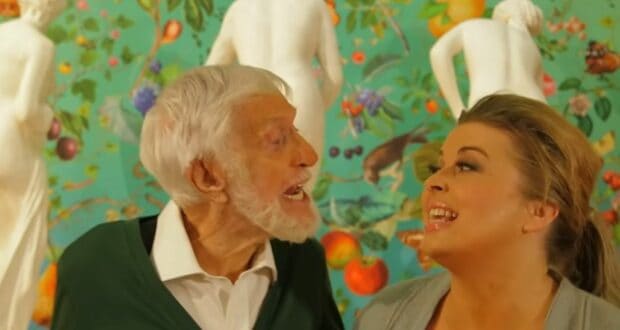 Disney Legend Dick Van Dyke may be 96-years-old, but that doesn’t seem to slow him down one bit. Instead, the well-known, award-winning, actor and singer took February 14, 2022, as the opportunity to release a music video with his wife.

Chances are most of us Disney fans know Van Dyke from his appearance in the classic Disney film Mary Poppins (1964), where Van Dyke played the talented chimney sweep, Bert. He also appeared in Mary Poppins Returns (2018) as Mr. Dawes, Jr. Of course, he was also the star of his own CBS television sitcom The Dick Van Dyke Show (1961–1966).

And that just touches a few small pieces of Van Dyke’s lengthy and impressive career which landed him several awards and led to him being named Disney Legend in 1998.

At the age of 96, Van Dyke is still showing he’s got the moves and the voice down as he released “Everybody Loves a Lover” music video with his 50-year-old wife, Arlene Silver.

The couple met at the SAG awards as Arlene was a makeup artist. The 46-year age gap between Van Dyke and Silver doesn’t seem to be an issue for these two love birds as they prepare to celebrate their 10th anniversary on February 29, 2022.

So, what better way to celebrate Valentine’s Day than with a new song and music video release! The song is titled “Everybody Loves a Lover” by Arlene & the Vantastix, featuring Dick Van Dyke & Tony Guerrero. Here it is below:

RELATED: Our Picks – The 5 Best and 5 Worst Disney Films

Dancing and singing… Van Dyke has still got it! What did you think of the music video? Let us know on Facebook.