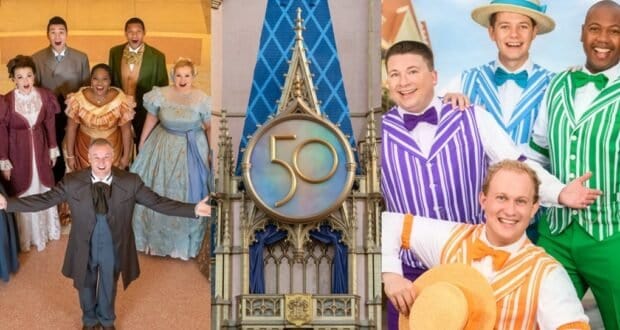 Walt Disney World’s 50th Anniversary week has FINALLY arrived! As we gear up for all the excitement to be unleashed on October 1, 2021, we’re learning more and more from Disney about what’s to be expected for the 50th celebration. We’ve now learned that Disney’s 50th Anniversary song, “The Magic Is Calling”, can also be heard by favorite entertainers throughout the Disney Parks!

We previously learned Walt Disney World is getting a new 50th Anniversary song called “The Magic Is Calling”. The song is said to connect to all four parks, as different arrangements of the song will be heard when each Walt Disney World theme Park icon transforms into a magnificent Beacon of Magic at night. Cinderella Castle, Spaceship Earth, Hollywood Tower Hotel, and the Tree of Life will each shine like never before and come to life on select nights with their own unique EARidescent glow.

Disney has announced: “The Magic Is Calling,” an inspiring new song written especially for the 50th anniversary, can be heard in a variety of ways during the 18-month celebration. Platinum-selling songwriter and music producer Alana Da Fonseca and Nashville-based songwriter and producer Bobby Studley created the original song, collaborating with award-winning composer Emily Bear and singing phenom Journi. Da Fonseca and Studley’s pop-music style, Bear’s soaring orchestrations, and Journi’s magical vocal performance come together to create a song that is at once nostalgic, inspirational, and contemporary.”

“The new song calls all Guests to join in the celebration, including at night when icons at each theme Park transform into Beacons of Magic. “The Magic Is Calling” is also included in special live entertainment moments across Walt Disney World, such as during “Mickey’s Celebration Cavalcade” at Magic Kingdom Park, or performances by the Dapper Dans (Magic Kingdom Park), Discovery Island Drummers (Disney’s Animal Kingdom Theme Park) and Voices of Liberty (EPCOT). “The Magic Is Calling” is available on the Walt Disney World playlist through Disney Music Group beginning Oct. 1, 2021.”

The popular Voices of Liberty are currently singing at select times in EPCOT’s America Gardens Theatre around the World Showcsae. The Dapper Dans make their appearance on Main Street, U.S.A. at Magic Kingdom Park. Plus, we’re excited to hear the new song with “Mickey’s Celebration Cavalcade” at Magic Kingdom! Currently, the Discovery Island Drummers are part of a “Flotilla” as they take their music to the water, performing live as they sail around the Discovery River at Disney’s Animal Kingdom. Of course, this could mean they may soon be going back on stage in Discovery Island.

Want a sneak peek of the new anthem for Disney World’s 50th Anniversary celebration? Check out the behind-the-scenes video below: