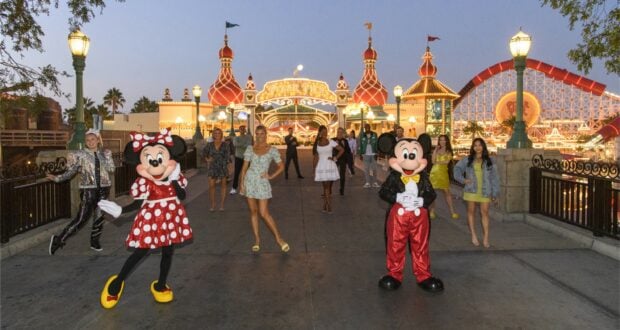 “Dancing With The Stars” Cast Revealed at Disneyland

The popular dance competition “Dancing With The Stars” has had a busy morning as they revealed the celebrity cast that will be performing on television for season 30. While you might be asking, “What does this have to do with Disney?” – well, the reveal took place at the beloved Disneyland! It was an early morning for the new cast but, it looks like they were still happy to be at Disney! Check out the videos below.

RELATED: Zoom Around the Incredicoaster on a Virtual Ride at Disneyland Resort

Yesterday, Disney Parks took to TikTok to share the news: “Watch @gma live Wed. Sept. 8 for the full cast reveal of #DancingWithTheStars season 30!” As you’ll see in the video, the contestants are at various locations throughout such as Avengers Campus, Cars Land, and Star Wars: Galaxy’s Edge at Disneyland:

RELATED: Video Clips of ‘Dancing with the Stars’ “Disney Night”

This morning, September 8, Good Morning America took to Twitter to share a video celebrating the big “Dancing With The Stars” season 30 contestant reveal while at Pixar Pier with Incredicoaster in the background:

RELATED: Experiences Disneyland Has That Walt Disney World Should Have As Well

So, who made the star-studded list of celebrities that will be on Dancing With The Stars season 30? The celebrity stars list as shared by Disney Parks Blog includes:

The professional dances for season 30 include:

The talented cast, along with professional dancers, will join host Tyra Banks and judges Len Goodman, Carrie Ann Inaba, Bruno Tonioli, and Derek Hough when the show returns. We likely see dance styles such as the quickstep, waltz, samba, foxtrot, rumba, ballroom, and more as contestants await the judges’ score.

Among the celebrity list to join the dance floor, we immediately spot a name that recently made big headlines at the 2020 Summer Olympics in Tokyo! The American gymnast, Suni Lee, just won three medals for Team USA. According to Good Morning America, Suni will be in her first semester at Auburn University while competing on “Dancing With The Stars”, but noted she is ready to “have fun and let loose.”

Our favorite night however with “Dancing with the Stars” is most definitely Disney night! Disney has confirmed this annual tradition will return where we will see the contestants dance to a favorite Disney song for one episode. It’s a little Disney magic right on the dance floor!

Hopefully, the contestants were treated to a Disneyland ride or two this morning! Or at least an early Dole Whip to start their day! The 30th season of ABC’s “Dancing with the Stars” returns to ABC on Monday night, September 20, at 8 p.m. Eastern and Pacific times, as contestants compete for the coveted Mirror Ball trophy. Are you a “DWTS” fan? If so, which celebrity contestant are you cheering for?