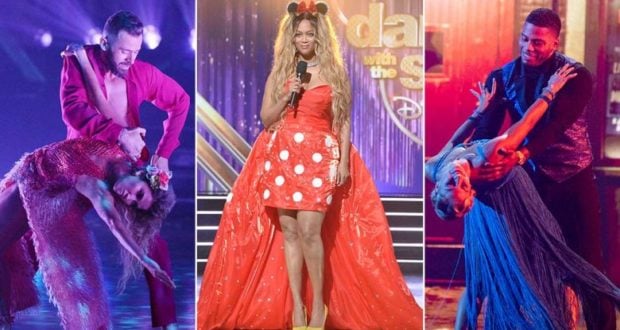 Video Clips of ‘Dancing with the Stars’ “Disney Night”

Dancing with the Stars recently held “Disney Night”. If you missed the show or if you just want to catch the magic moments once again, check out the video clips and details shared below by D23.

Dancing with the Stars brought the magic of Disney to viewers’ homes all around the U.S. Monday. The ABC competition series’ annual “Disney Night” began with Mickey Mouse giving a warm welcome to Tyra Banks, the show’s new host and executive producer. Banks then entered the ballroom wearing a fabulous dress inspired by the ultimate fashionista, Minnie Mouse, as the Main Street Electrical Parade lit up the ballroom. “We all need a bit of magic in our lives,” Banks told viewers. “Since we can’t go to Disneyland, we are bringing some Disney magic to all of you with our princes, our princesses, our pirates, and more!”

First up were Skai Jackson and her partner, Alan Bersten, dancing the jive to Disney Legend Randy Newman’s “Almost There” from The Princess and the Frog. “I was really excited about dancing to The Princess and the Frog. It has always been one of my favorite Disney movies,” Jackson told D23 after earning a final score of 18/30. “Tiana is the only Black Disney Princess, so that’s really special, and no one has ever done the song on the show before.” The Disney Channel actress, best known for her role as Zuri Ross in Jessie and BUNK’D, added she’d been “really looking forward” to bringing everything full circle with the “Disney Night” episode. “I had a blast doing it. I hope I made my Disney family proud!”

Following Jackson and Bersten were Monica Aldama and partner Val Chmerkovskiy dancing the waltz to Disney Legends Howard Ashman and Alan Menken’s “Part of Your World” from The Little Mermaid. The duo earned their highest score this season, a 21/30, with judge Carrie Ann Inaba saying Aldama was like a “different person” and judge Bruno Tonioli commending the “confidence and connection” she’d displayed on the dance floor.

Next up were Justina Machado and partner Sasha Farber dancing the Charleston to “Supercalifragilisticexpialidocious” from Mary Poppins. “It’s great to do something that is so out of your comfort zone,” Machado told D23 after earning a 19/30. “And then to play a character that I would never see myself playing, that part was exciting.” Added Farber, “It was absolutely magical, from the outfits to the dance to the way Justina performed it.”

Hot on their heels was the self-anointed “Ultimate Disney Princess Dad” AJ McLean and his partner, Cheryl Burke, dancing the quickstep to “Prince Ali” from Aladdin. Before they received a final score of 21/30, new judge Derek Hough said, “AJ, I can always rely on you to put a smile on my face. You are always committed to every performance—so much fun!”

Anne Heche and partner Keo Motsepe were next, dancing the quickstep to Menken and David Zippel’s “Zero to Hero” from Hercules. “This dance was so much fun to do,” Motsepe told D23 after the show. “Everyone who’d seen it in rehearsal was like, ‘Wow!’” Although they are hoping to improve upon their score of 15/30 in next week’s episode, Motsepe said their chemistry is only getting stronger as the competition continues. “Anne and I are like two kids in Disneyland,” he said. “Just having a good time in our own world… but together!”

Following Heche and Motsepe were Jeannie Mai and partner Brandon Armstrong dancing the Viennese waltz to “Married Life” from Up. Dressed as Carl and Ellie and using balloons as props, they lifted their scores to a season high of 22/30 with one eight and two sevens. Mai was so surprised and thrilled by the judges’ reactions she actually ran off with their score cards. “I couldn’t believe it!” she later told D23. “I worked so hard this week for one seven; I just wanted a seven.” She also dedicated the performance to her rapper fiancé, Jeezy: “I told the producers, ‘I want Up! Brandon put together beautiful choreography.” Just as he did for “Disney Night,” Armstrong said his goal for the coming weeks is to choreograph numbers that elicit an emotional response from viewers. “I’m very much of the mindset that if you keep the inside of your little bubble clean, then the people looking in will always respect that, and it will always be going up and up—literally, going Up. Get it?”

Next, Nelly and partner Daniella Karagach danced the foxtrot to “It’s Alright” from the upcoming Disney and Pixar film Soul, opening in U.S. theaters November 20. The routine earned three sixes for a total of 18/30. “I thought it was more than alright; I thought it was great,” Hough said, praising Nelly’s “smooth” frame. Tonioli called it a “charming” number, telling Nelly, “You behaved like a real gentleman with your lady. So tender! So attentive!”

Following in their footsteps were Carole Baskin and partner Pasha Pashkov dancing the samba to Disney Legends Elton John and Tim Rice’s “Circle of Life” from The Lion King. “I love the movie. It’s such a wonderful message,” Baskin said of their pick. “One of the most beautiful things about the Disney films that feature animals is that they are living free.” Although Baskin and Pashkov earned the lowest score of the night, with a 12/30, it wasn’t all bad news. Said Inaba, “I really want to salute you for the love you put into that dance.”

Kaitlyn Bristowe and Artem Chigvintsev fared better after dancing the foxtrot to “How Far I’ll Go” from Moana. “I’ve seen Moana probably 50 times,” admitted Bristowe. “She comes from this island and that’s all she knows, but she wants to see what’s beyond the reef. And that’s like me coming out of my small town.” Their performance made waves with the judges, resulting in 23/30. Inaba called it “the best dance of the night,” Hough admired Bristowe’s “fluidity,” and Tonioli told her, “You really reminded me of the shape of water.”

After the commercial break, Vernon Davis and partner Peta Murgatroyd invited the at-home audience to “Be Our Guest” as they danced the quickstep to the Beauty and the Beast classic, earning a score of 22/30. After their performance, Murgatroyd admitted to D23, “I was not expecting that! I was hoping for sevens, and when the eight came up, I think I screamed really loudly. I have to watch that back to see if I made a fool of myself!” And although he had initially hoped to dress up as Beast, Davis happily lit up the dance floor as Lumière. “He’s awesome,” the NFL player told D23. “I was watching him last night before I went to bed, just trying to mimic him a little bit and loosen up.” Since the show started, Davis said his three kids have been getting a kick out of seeing him perform. “They love seeing me do something different. They’ve been watching me play football their entire lives—since they were born—so it’s nice to do something else and change it up,” Davis said. “They’re excited for me and they’re happy—and they like all the outfits I’m wearing.”

Next, Nev Schulman and partner Jenna Johnson danced the Argentine tango to “Angelica” from Pirates of the Caribbean: On Stranger Tides. After earning a 24/30, the highest score of the season, Johnson told D23, “I don’t think Nev dropped character one time throughout two hours of filming!” According to Schulman, “I felt more comfortable as Captain Jack Sparrow. And not just the character, but the set and the music really put me in the zone to be smoldering, passionate, and sharp. But the outfit and the makeup helped a lot, for sure.” Going forward in the competition, Johnson said, “We have some momentum right now and we want to keep building on that. I don’t want to put too much pressure on ourselves. I want us to keep pushing, keep working hard, and keep putting our best foot forward every Monday. I’m very happy with where we’re at but I want to keep working really, really hard.”

Johnny Weir and partner Britt Stewart had big shoes to fill—and boy, did they! Their rumba routine, set to Disney Legend Christina Aguilera’s “Reflection (2020)” from Mulan, landed them at the top of the leaderboard, tying Schulman and Johnson’ score of 24/30. “Mulan is about the strength of family and sacrifice, and I definitely feel I wouldn’t be who I am without my family,” admitted Weir. “And it is an honor for me to represent them.” His performance with Stewart moved Inaba to tears; she told him, “I believe in you so much. Tonight, watching you dance like that felt so good, because I saw you make the transition from being an ice skater to being a ballroom Latin dancer… It was epic!” Hough called the number “beautiful” twice, while Tonioli praised Weir’s “exquisite” shapes and extensions.

Jesse Metcalfe and partner Sharna Burgess danced the jive to “King of New York” from Newsies next, earning a score of 20/30. “In rediscovering Newsies, I felt like ‘King of New York’ was the perfect song, and I loved what our wardrobe department did with the costumes,” Metcalfe told D23 after the show. “I just thought it was a really great opportunity for me to show a more fun side and maybe show some Broadway potential.” Burgess said she was “very proud” of Metcalfe’s continued improvements and can’t wait to get to work on next week’s cha cha. “It’s going to bring out a different kind of spice. We’re going to bring out that hip action,” Burgess said with a laugh. “If we keep working the way that we’re working, then we can keep climbing the leaderboard and impressing the judges.”

The final “Disney Night” dance saw Chrishell Stause and Gleb Savchenko performing the waltz to “A Dream Is a Wish Your Heart Makes” from Cinderella. “We all know Cinderella had a rough start, so I really relate to her in many ways,” said Stause. “I feel like this is the ultimate rags-to-riches story.” Their romantic waltz nearly ended with a kiss—until the clock struck midnight and the magic wore off. Before receiving a score of 22/30 (their highest yet!), Tonioli crowned Stause “the belle of the ball,” telling her, “You really look like the ultimate Disney princess. Gorgeous, gorgeous, gorgeous! I could feel the romance unfolding.” Likewise, Inaba told Stause and Savchenko, “You guys are like magic together!”

Of course, all good stories must come to an end. After finding themselves in the bottom two with Heche and Motsepe, Baskin and Pashkov became the second couple eliminated. Smiling, Baskin said, “My husband is going to be so happy I’m coming home!” Overall, as Inaba had said moments earlier, “Everyone did an amazing job for ‘Disney Night’ tonight.” 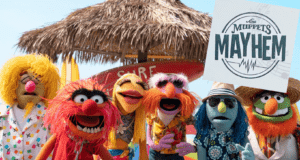 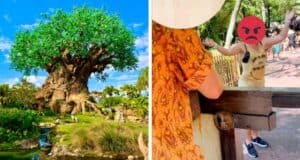