Disney+ has released a trailer for the new National Geographic documentary, Fauci, which takes a look at the personal and professional life of Dr. Anthony Fauci, our nation’s top infectious disease expert.

The all-new documentary is directed by Emmy winners Janet Tobias and John Hoffman for National Geographic Documentary Films and gives an insight into the life of the physician who has led the United States in its fight against the coronavirus pandemic that began in early 2020 and worked to increase knowledge, awareness, and understanding of the virus.

“When you’re involved in a race to stop a terrible disease,” Fauci explains in the documentary, “you always feel like you’re not doing things quickly enough.” 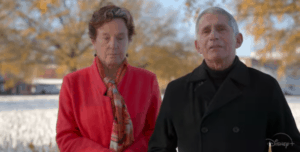 The documentary features interviews with family and colleagues, as well as home videos that help to paint the good doctor as a father and a husband, in addition to the public persona associated only with the pandemic. It brings to light the very human side of Dr. Fauci, who, on camera, becomes very emotional as he looks back at previous outbreaks and his efforts to curb their fury.

National Geographic touts the new documentary as a “rare glimpse into the long-standing professional career and personal life of the ultimate public servant, who, after a lifetime of service, faced his biggest test: a pandemic whose ferocity is unmatched in modern history,” applauding Dr. Fauci’s “signature blend of scientific acumen, candor, and integrity.”

National Geographic highlights Dr. Fauci’s challenges related to an unprecedented pandemic during a politically tense time in our nation’s history, saying that the doctor, whose specialty is in infectious diseases and immunology, became a cultural icon recently, but that his iconic status has “come at a cost as he has also faced attacks from adversaries in a nation increasingly divided by political party lines with science increasingly caught in the crosshairs.”

Eighty-year-old Fauci is a physician-scientist and immunologist who currently serves as the director of the National Institute of Allergy and Infectious Diseases (NIAID). He is also the Chief Medical Advisor to the President of the United States.

His requests of the American people during the pandemic, as well as his recommendations for precautionary measures against the SARS-CoV-2 virus, have been met with both accolades and opposition. He has been Chief Medical Advisor to 7 U.S. presidents, and in addition to his efforts in the fight against COVID-19, Dr. Fauci has been notably involved in work overseeing the public’s responses to other outbreaks as well, such as HIV/AIDS, Ebola, and SARS.

You can stream Fauci on Disney+ beginning tomorrow, October 6, under the National Geographic heading.