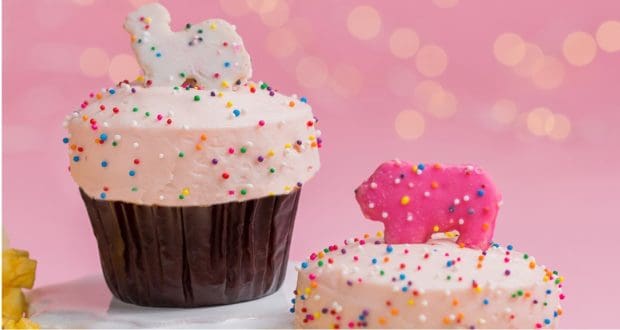 Welcome to August! We’re celebrating the reopening of several Walt Disney World attractions and entertainment, the EPCOT International Food & Wine Festival, and the arrival of Disney After Hours Boo Bash. So what goes better with celebrating than a delicious cupcake or two? How about a Circus Animal Cupcake! Disney Springs is home to a plethora of tasty treats, but YUM, this one is a must do.

Time to head on over to Disney Springs where you’ll find the ever-so-popular cupcake destination – Sprinkles. This cupcake shop serves up all the cupcakes your heart could desire, and has some big plans to bring new flavors to August. Sprinkles Cupcakes took to Twitter to share: “August flavors have us feeling young again. What flavor are you most excited for?” They included the enticing photos below. First up, Sprinkles is currently combining cookies and cupcakes with their “Cookie Cupcake” now available through August 8.

But Sprinkles doesn’t stop there! Is it ice cream or is it a cupcake? Your taste buds won’t be able to tell! Sprinkles goes on to share they are releasing a YUMMY “Banana Split Cupcake” from August 23 to September 6 as shown below:

And last but not least… if you’re ready to check out Sprinkles shipping, you can order a Banana Dark Chocolate assorted dozen from August 3 to August 28.

Which August cupcake are you most excited about? Simply follow your nose to Sprinkles which is located in the Town Center portion of Disney Springs. If you’re ready to order select options online, you can visit Sprinkles website here. Have fun treating yourself this August, Disney (and cupcake) lovers!