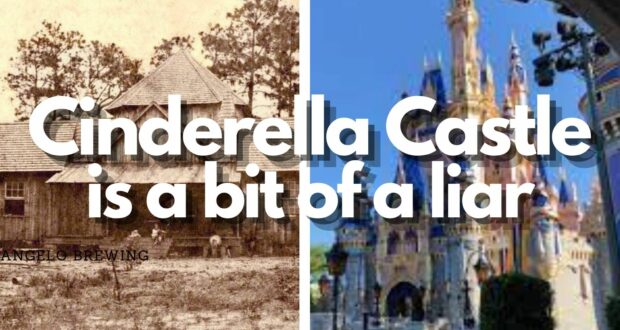 Cinderella Castle, a lovely liar: another castle in Central Florida stood 100 years before she did

Ah, Cinderella Castle, the Bavarian-style beauty that stands regally in the background of the vacation photos of millions of people every year. The castle has served as the icon for Magic Kingdom for 50 years now, and its royal beauty is more noticeable now than ever, thanks to its recent facelift in preparation for the 50th anniversary celebratory exercises and experiences at the park.

RELATED: Take a journey with us through the gorgeous history of Cinderella Castle

In 1869, shortly after the Civil War, a man named Will Wallace Harney and his wife, Mary Randolph Harney, made the long journey from Louisville, Kentucky, to Orlando, Florida. Before coming to Florida, Harney had already gained some notoriety as a writer.

“Most of his writing appeared in serialized form in newspapers across the country,” says William Morgan, chairman of Pine Castle Pioneer Days.

Morgan says Harney’s writing read like a blend between the works of Mark Twain and those of Edgar Allan Poe. His pieces were written in a humorous tone, and Harney always used the dateline, “Pine Castle.”

“Those writings gave us our first real glimpse of what it was like to live in Central Florida,” says Morgan, “People across the country just ate it up.”

Like Walt Disney, Will Wallace Henry got a heck of a deal on his Central Florida land. In fact, Harney trumps Disney when it comes to getting the best price on Florida land; he got it for free, thanks to a practice called homesteading. The only catch was that if you chose to acquire land by homesteading it, the law said you also had to live on it and make improvements to the land.

One of the first things Harney and his wife did with their 160 acres of land was to build a living structure on it, but this was no ordinary structure.

“It was such an odd-looking place that when people would go by it they would say, ‘there’s the pine castle,’” Morgan explains.

The “castle” looked a bit reminiscent of a cabin, but unlike other cabins built during the late 1800s, Harney’s structure featured timbers that laid vertically, rather than horizontally, giving it the illusion of being taller than it was. It’s true, though, that Harney’s castle was much larger than other cabins built during that time. It also featured a central, octagonally-shaped room situated between a left wing and a right wing.

RELATED: Fairytale and nightmare all in one: More than 500 ‘abandoned Disney castles’ located in Turkey

Henry’s castle, like Cinderella Castle at Magic Kingdom, also featured turrets. A long porch ran across the front of the castle, and it also had lookout areas. It was very different from any structure built in the area at that time–so different that the geographical area around Harney’s castle became known as “Pine Castle, Florida.” Today, the large area is a combination of a handful of towns, including Edgewood, Belle Isle, Conway, and Pine Castle. RELATED: How did this Guest bypass security and CLIMB Cinderella Castle? 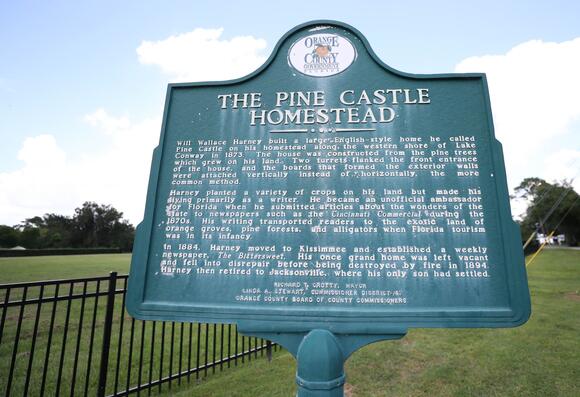 Today, the name of the community is still intact. But Harney’s castle, however, is not. It burned in a fire in 1894 while Harney was at work in Kissimmee. Everything but the turrets burned. A historical marker is all that remains of the castle structure that was once located on Matchett Road, opposite Lake Conway.
1869 1873 central florida cinderella castle Pine castle Will Wallace Henry 2021-11-27
+Becky Burkett
Previous: ‘Thanks, Disney World, for existing!’ Carrie Underwood, family celebrate Thanksgiving at the Most Magical Place on Earth
Next: Wild turkey on the lam at Disney World just before Thanksgiving; we’re thinking he didn’t get a pardon