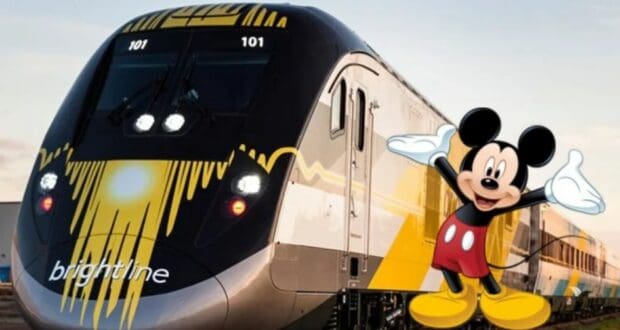 Looking for the best and easiest way to get to and from Central Florida? With theme park giants like Walt Disney World Resort and Univeral Orlando Resort, traffic is always a pain… but how about taking a train?

I-4 not only recently opened new express lanes for a toll fee, but Walt Disney World has even announced it is expanding outside of its property bubble with a new Disney Store and digital display for all to enjoy while traveling I-4.

RELATED: Disney Has ONE YEAR LEFT to Build the Walter Elias Disney International Airport at WDW

Now, we’re shifting our focus to Orlando International Airport (MCO) where construction is under work to expand with a new Terminal C opening later this summer to keep up with MCO’s massive volume of travelers. MCO had a new visitor however as Brightline has set a new milestone in the Orlando area.

With planes and automobiles covered… Orlando is shifting its focus to TRAINS! On Wednesday, May 18, 2022, the very first Brightline train arrived at the Orlando International Airport. The high-speed rail service has been the center of much buzz lately as it works to connect Orlando to Miami.

Check out the video below from FOX 35 Orlando:

What makes this even sweeter for Disney travelers? Well, Walt Disney World Resort (and Universal Orlando Resort) are currently in talks with Brightline and Orlando’s local commuter rail, SunRail, to provide train service to the theme parks. The initial proposal is to open a Disney train station in the Disney Springs area.

There is still much discussion and planning in the works for the Disney Springs station, but we are eager to experience a high-speed train as the perfect transportation to take Guests from the airport to Disney’s property easily. Of course, we’re still missing Disney’s Magical Express, but are happy to have other transportation possibilities in the works.