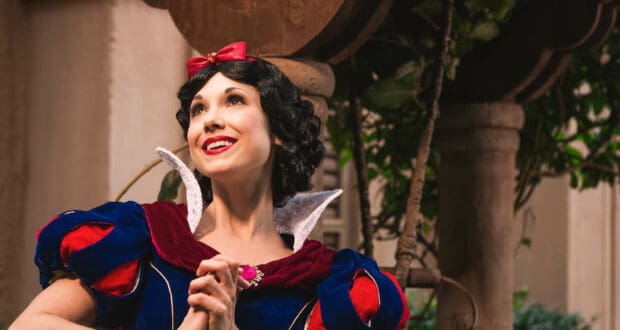 The Walt Disney Company has created some of the most beloved and iconic films of all time, but it was all started with Snow White and the Seven Dwarfs — the company’s very first full-length feature film, released in 1937. Running at just over eighty minutes, the animated film introduced beloved characters including Snow White, Dopey, and Grumpy, classic songs such as “Heigh-Ho” and “Someday My Prince Will Come.” Snow White went on to win a special Academy Award, which recognized the genius of the animation and storytelling. 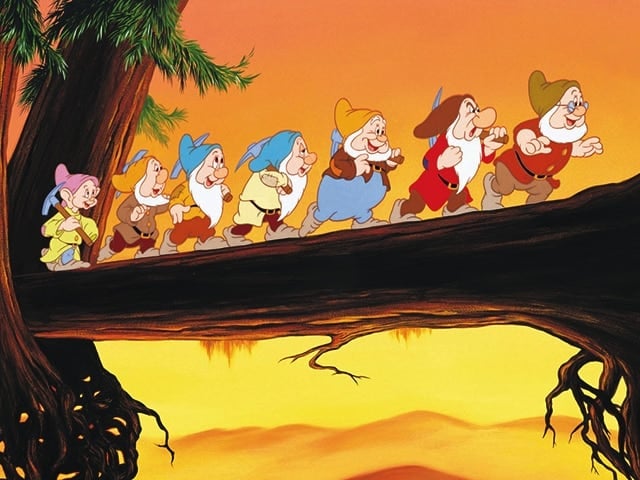 With such immediate popularity and a deep love that has continued to grow throughout the years from new generations, Snow White and the Seven Dwarfs has solidified its place in history and not surprisingly has also influenced several attractions and experiences in the Disney Parks. Guests who visit the Walt Disney World Resort can enjoy an entire day filled with wonderful experiences that are sure to immerse them in the Disney animated film’s story and make them feel as though they might bump into one of the dwarves around any corner!

RELATED: Whistle While You Work On This DIY Snow White Wreath 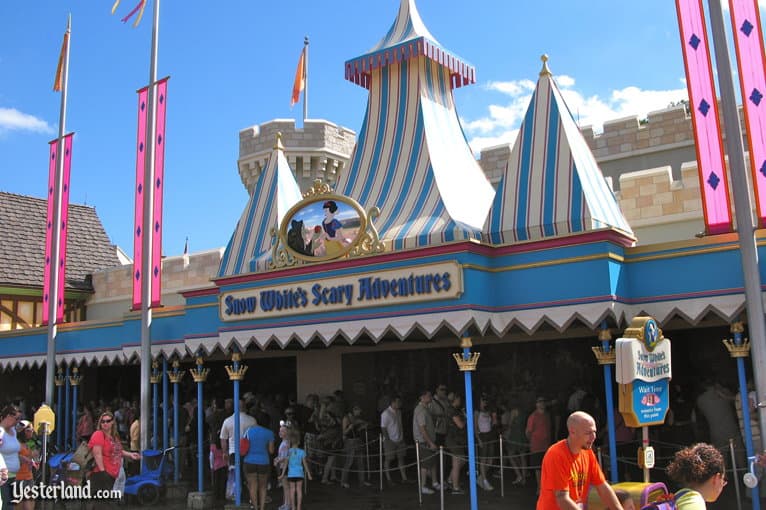 While there are plenty of current experiences that involve Snow White and the Seven Dwarfs at the Walt Disney World Resort, we would be remiss to not mention the former Snow White’s Scary Adventures attraction in the Magic Kingdom which brought Guests on a retelling of the film, complete with audio-animatronics and a dramatic conclusion. The attraction closed in 2012 to make way for Princess Fairytale Hall, but it still holds a special place in many Guest’s hearts. 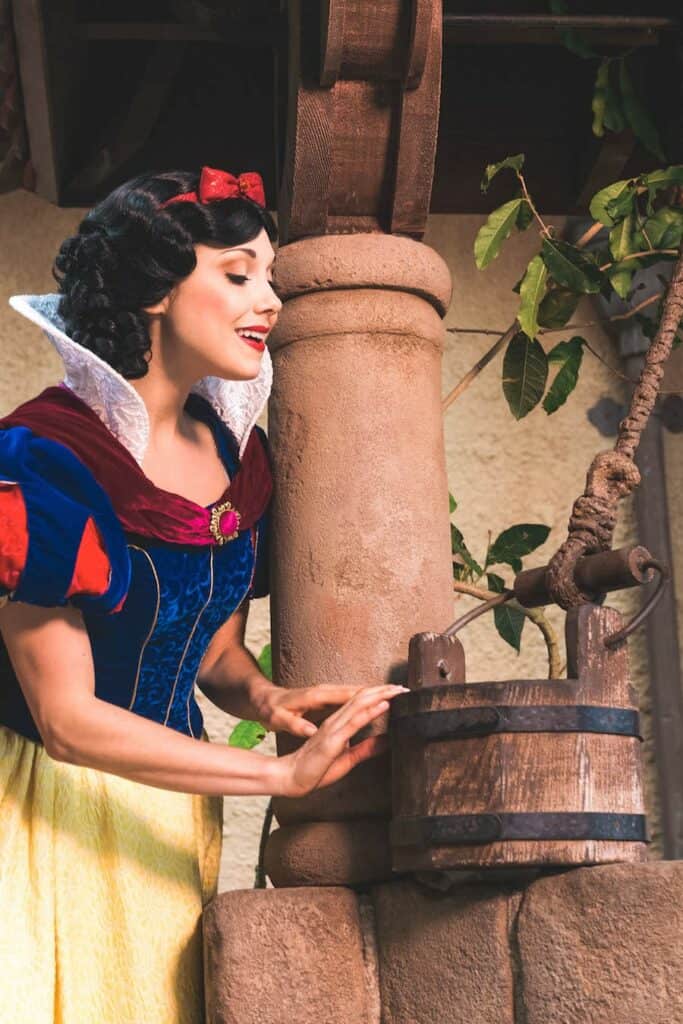 While Snow White’s Scary Adventures no longer exists, there are still plenty of wonderful ways to enjoy Snow White and the Seven Dwarfs at the Walt Disney World Resort today, including attractions, dining, and more. 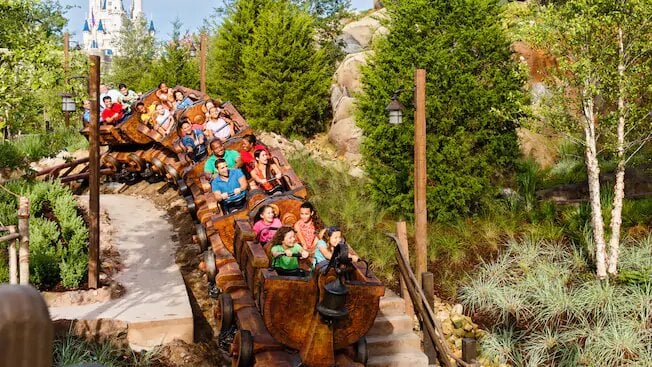 Fantasyland in the Magic Kingdom is home to the very popular Seven Dwarfs Mine Train, which brings Guests on a thrilling adventure aboard a mine train where each individual cart independently sways and rocks with each turn on the tracks. The highlight of the attraction is when Guests are whisked into the mines and find advanced audio-animatronic versions of the Dwarfs hard at work. Using impressive technology, the Dwarfs truly seem alive with realistic expressions, and Guests happen to catch them at the end of the workday where they can soon be found marching home and singing “Heigh-Ho.” 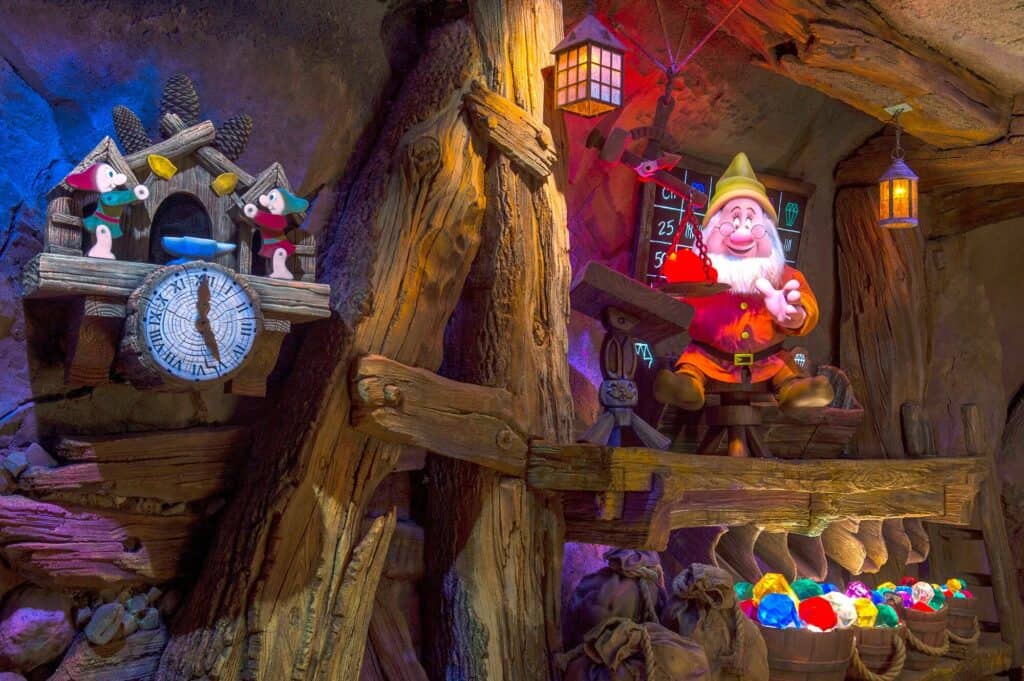 The Seven Dwarfs Mine Train also pays homage to the now-extinct Snow White’s Scary Adventures with its end scene that Guests can enjoy just before pulling back into the loading and unloading area. Snow White and the Dwarfs can be seen playing music and dancing inside of their cabin while the Evil Queen looks on, and some of the dancing figures were reused from a similar scene in the former attraction. 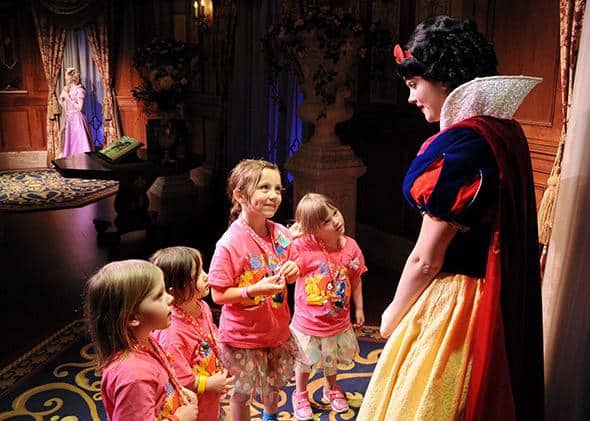 Steps away in the Magic Kingdom’s Fantasyland is another experience where Guests have the opportunity to meet Snow White herself. Princess Fairytale Hall is what replaced Snow White’s Scary Adventures, and the regal setting welcomes Guests into a royal hall where some of the most popular Disney Princesses hang out. Different princesses are available each day, but lucky Guests will find themselves able to meet Snow White who is wearing her iconic blue, yellow, and red outfit and ready to sign autographs, pose for photos, and talk about her day-to-day life with Prince Charming and the Dwarfs. 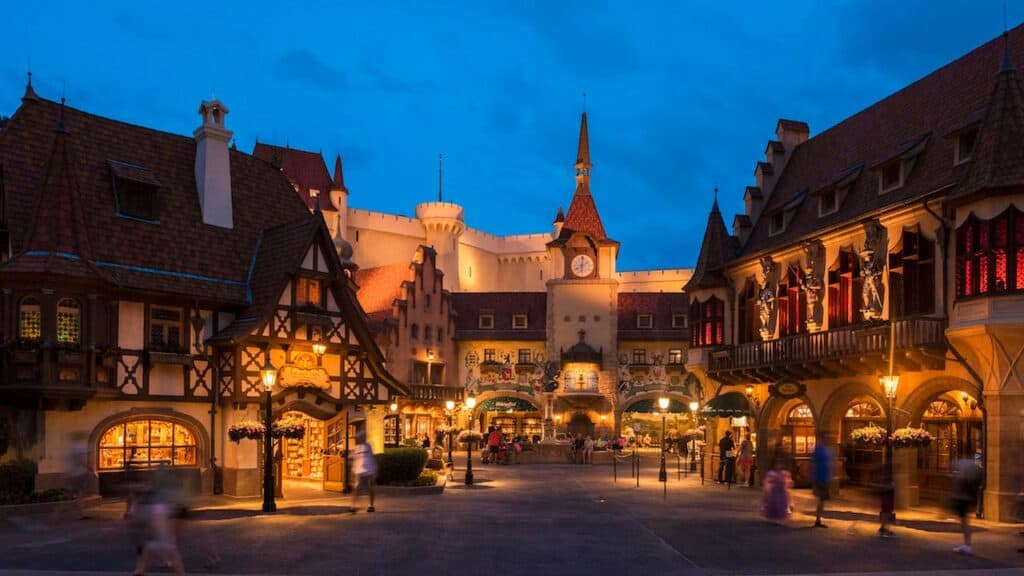 After enjoying a morning in the Magic Kingdom, Guests can head over to EPCOT’s World Showcase to check out the Germany Pavilion and soak in the beauty and culture provided through architecture, dining, shopping, and more. Snow White and the Seven Dwarfs is inspired by the classic German fairy tale, so Guests can truly feel as though they are stepping into the film by wandering through the Germany Pavilion and enjoying all the charming details that can be found. 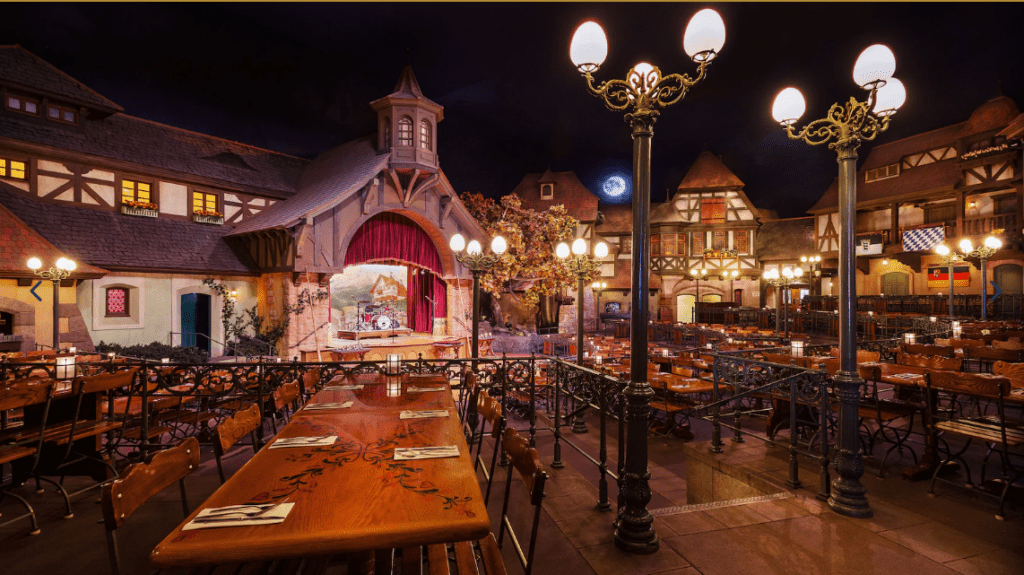 While in the Germany Pavilion in EPCOT, Guests should stop to enjoy lunch at the popular Biergarten Restaurant, a table service location that serves up traditional German food while celebrating the festive spirit of Oktoberfest. Guests who enjoy a meal at Biergarten Restaurant are seated communally at large picnic tables that are scattered throughout a charming German town and courtyard with a central stage. 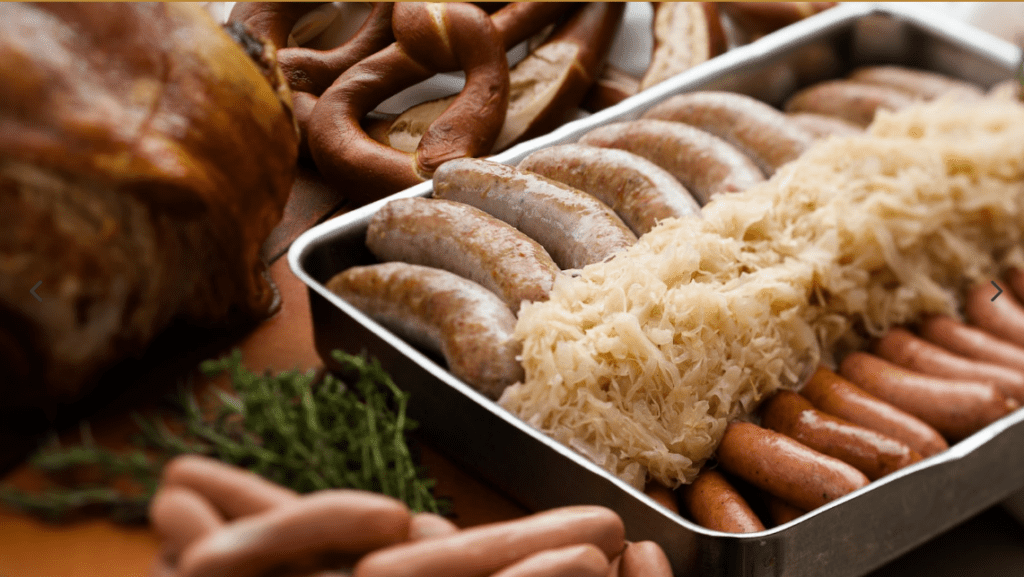 While sampling traditional German cuisine including sauerkraut, schnitzel, and nudel gratin and sipping on steins of beer, Guests can dance and sing along to a variety of acts by a lively oompah band. The Biergarten Restaurant perfectly combines delicious food and traditional live entertainment that will make Guests feel as though they have traveled across the world to Germany. 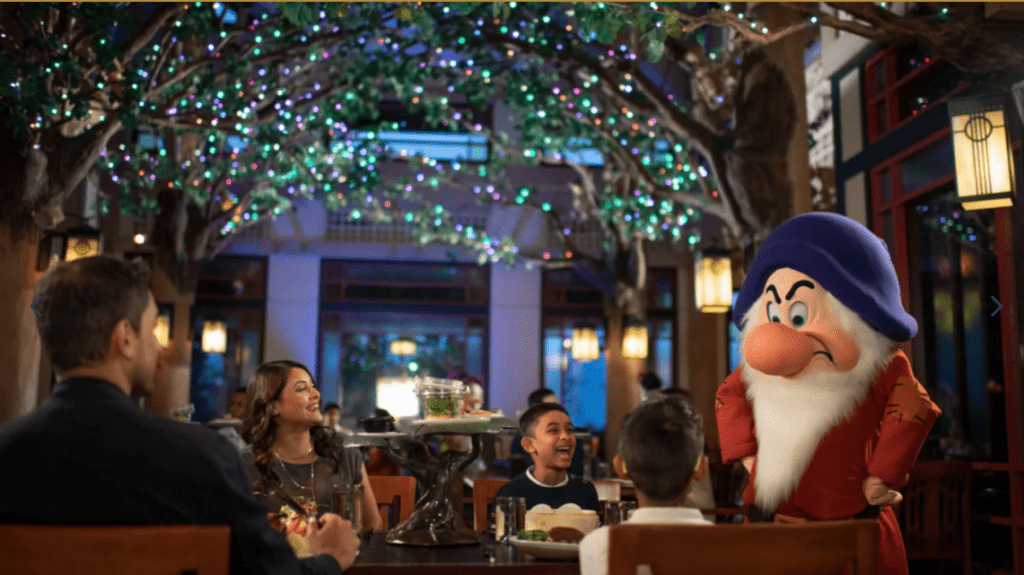 The ultimate dining experience for fans of Snow White and the Seven Dwarfs can be enjoyed each night for dinner at Disney’s Wilderness Lodge. Storybook Dining at Artist Point with Snow White invites Guests into a magical dining area where twinkling trees create a canopy above truly making them feel as though they are deep in the forest where the Dwarfs live and there are appearances throughout the meal by Snow White, Grumpy, Dopey, and the Evil Queen. 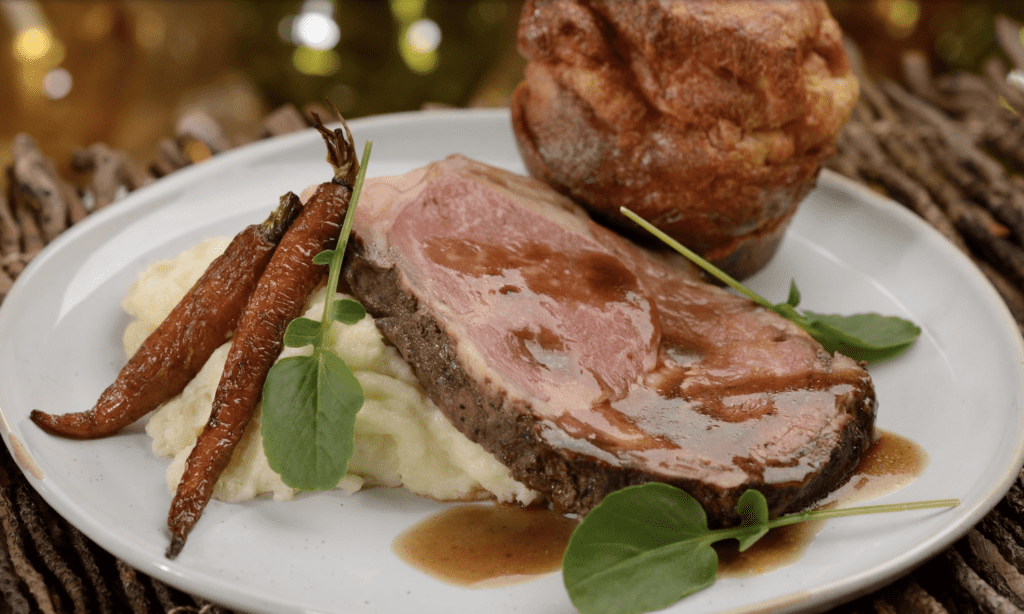 The menu at Storybook Dining at Artist Point with Snow White serves up a prix-fixe menu of American and German classics with clever nods to Snow White and the Seven Dwarfs and Guests love digging into options such as Wicked Shrimp Cocktail, Hunter’s Pie, Magic Mirror’s Slow-braised Pork Shank, and Brother’s Grimm Herb Chicken. This is the perfect dinner for fans of Snow White, and the atmosphere and character interactions can’t be beat!