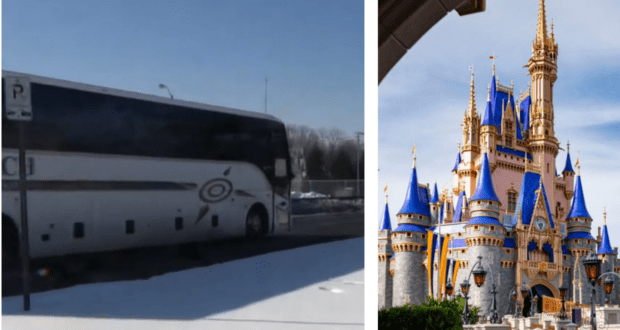 A group of high schoolers in Michigan were on their way to Disney World until they weren’t. But the community and the school rallied together to make sure the acts of one wouldn’t sully the trip for the group.

The Clinton High School Band had worked hard to raise money for a trip to the Most Magical Place on Earth, but the hopes and dreams of the band were dashed when it was discovered that a former Band Boosters treasurer had stolen tens of thousands of dollars from the Band Boosters monies which fund trips like the one to Disney World so the band can attend workshops and perform in downtown Orlando.

RELATED: A Louisiana principal turned his school around, so Disney surprised him with a vacation to the parks

Nanette Stewart, a former Band Boosters treasurer, admitted she took as much as $20,000 from the organization in a plea agreement, but an investigation into the Band Boosters’ financial records after “irregularities” were discovered by a forensic accountant. According to those findings, more than $100,000 was taken.

“We understand that for purposes of the plea, restitution obviously could be far greater than $20,000, but the plea is to no more than $20,000,” Lenawee County Circuit Judge Anna Marie Anzalone said.

Stewart has already repaid almost $19,000, and she is scheduled for sentencing this week.

But the best part of this story is that the band worked even harder to raise more funds so that their magical trip could still be a reality. The community also rallied around the Clinton High School Band, helping with fundraising and even making donations.

“It was really difficult for our boosters, but our community is so fantastic and in partnership with our band booster program they’ve done a really great job to fund this trip for us for Disney,” explained Zachery Casper, Clinton High School Band Director.

RELATED: Family of 50 wins trip to Walt Disney World
Casper says that all the missing funds that were to be used for the band’s Disney trip was replaced, thanks to the efforts of the band and the community.

“We have been fundraising like crazy,” Casper said. “Everything from concessions to sock sales, coffee sales, and we’ve had incredible large donations from more people than I can even name to help us out.”

But the community where Clinton High School is located is one that has a history of “banding” together, if you will, and because of that, Casper said he never doubted the band would somehow be able to see Mickey after all.

“We’re a really perseverant community with incredible community members and a great band booster program and fantastic administration at our school, so I was never worried that we wouldn’t be able to make it happen,” he explained.

RELATED: Mom and family of 29 get the surprise of a lifetime from Mickey himself

Casper says that because of all the band has been through recently, their trip to Disney World will be even more magical.

“To finally see it realized is really exciting for us.”

The band had a 20-hour drive to Orlando from Clinton High School, but something tells us they won’t mind the long drive one bit.

2022-02-14
+Becky Burkett
Previous: Whoopi Goldberg Returns to ‘The View’, Calls It “An Honor”
Next: New legislation would give Disney huge tax breaks if they’ll film movies and TV series in Florida