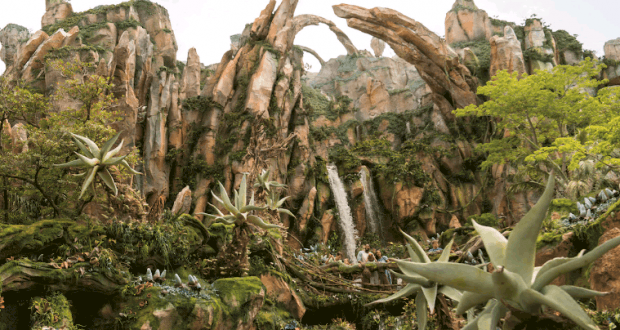 Disney’s Animal Kingdom is more popular than ever. Pandora – The World of Avatar has brought crowds who want to get a glimpse inside the life of the Na’vi. The park is about more than just Pandora, though. There is so much to do that you might want to stop by twice while on your vacation. Here are ten things that you must know about Disney’s Animal Kingdom.

One thing that is nice about people wanting to visit Pandora – The World of Avatar is that the other parts of Disney’s Animal Kingdom aren’t all that crowded at the beginning of the day. If seeing Pandora isn’t on the top of your list, you’ll have a great time in the other parts of the park when it first opens. The lines will grow longer as people leave the Valley of Mo’ara, but at rope drop you’ll be shocked by how much you can do outside of Pandora.

The summers in Central Florida are known for being hot and humid, but spring and fall can be uncomfortable as well. Even the winter has its fair share of days that will cause you to break a sweat. If you’re looking for a way to cool off, hit Kali River Rapids. Many people say that it is one of the best river raft rides at any amusement park on the planet. One word of warning, you will get soaked. Of course, on a hot day getting soaked is a good thing.

Head into the Himalayan Mountains on a runaway train. On your journey you’ll come face to face with the mythical Yeti. One thing you might not know about your Yeti encounter is that the creature is not operational. The Audio-Animatronic creation hasn’t worked properly since a few months after the ride opened. Strobe lights now create a moving effect, giving him the unofficial nickname Disco Yeti. Still, many people say that Expedition Everest – Legend of the Forbidden Mountain is one of the best thrills that Walt Disney World has to offer. If you’re a roller coaster fan, you’ll want to hit it more than once.

If you like to go behind the scenes, Disney’s Animal Kingdom has some great tours. You can go on a guided safari, walk across a rope bridge, and enjoy great views of the animals. Most of the tours at Walt Disney World are for teens and older, but at Disney’s Animal Kingdom there is a choice for some of the younger members of your party as well. In Caring for Giants, your family can learn about African elephants and see them from about 100 feet away. For more information, call 407-WDW-PLAY (407-939-7529).

If you like to sit back and be entertained, you’ll find a lot to love at Disney’s Animal Kingdom. Festival of the Lion King is extremely popular. The theater is large, but it will often fill up. Audience participation adds to the fun. Finding Nemo – The Musical uses puppets and actors to retell the story of the clownfish in search of his son. There are street shows and dance parties. End your night with Rivers of Light, which is simply stunning.

Disney’s Animal Kingdom gives guests a chance to see plenty of animals. Disney has recreated their natural habitats, so you can pretend that you are seeing them in the wild. There are different trails that you will want to explore so that you can see as many animals as possible. You can take the trails at your own pace, just make sure that you have your camera ready.

There are plenty of delicious places to eat at Disney’s Animal Kingdom. You can enjoy Asian, African, and American cuisine, and even dine on some favorites of the Na’vi. If you think that you’ll be really hungry, make a reservation at Tusker House Restaurant. All three meals are character meals, featuring Donald and a couple of friends who are ready for safari. Tusker House Restaurant has the largest buffet at Walt Disney World. Many people also say that it is the best. If you want to make that decision for yourself, make a reservation for your next trip to Disney’s Animal Kingdom.

The Tree of Life is a marvel at any time of the day. It is huge, and when you get closer you can see some of the over 300 animals that are carved into it. You will want to see the Tree of Life after dark. Tree of Life Awakenings is a newer projection show. Every ten minutes or so the tree will seemingly come alive. The show lasts only three to four minutes, but don’t worry if you miss it, it will happen again soon. There are several different scenarios that you might see. One show might feature monkeys, and the next one could feature a baby deer. The projection show is so well done that you might forget that you’re staring at the Tree of Life.

Pandora – The World of Avatar is where many people will head as soon as they enter Disney’s Animal Kingdom. The land is amazing during the day, but don’t let that be the only time that you visit. You need to experience Pandora at night. The land literally feels as if it comes alive. If you’ve already ridden the two rides and eaten at Satu’li Canteen, you might think that there’s no reason to return. You would be wrong, you need to see the nighttime transformation. You won’t find anything like it at a theme park back home.

At Disney’s Animal Kingdom, you are going to want to make your FastPass+ reservations as soon as you are able. That is because the two new rides will not have any choices left by the time you arrive. FastPass+ is in tiers at Disney’s Animal Kingdom. You can choose either Avatar Flight of Passage or Na’vi River Journey for Tier One. Everything else is on Tier Two. If you’re staying on property, you will want to make your Flight of Passage reservation at 7:00am Eastern at the 60 day mark, because they will most likely be gone within a few minutes. The new ride is that popular (and that incredible). If you can’t get that, grab one for Na’vi River Journey. That is still difficult to get, but they won’t all be gone as early. If you have to wait until 30 days because you aren’t staying at a Disney resort you will still have a good shot at making a reservation for Na’vi River Journey. If you don’t have FastPass+ for either