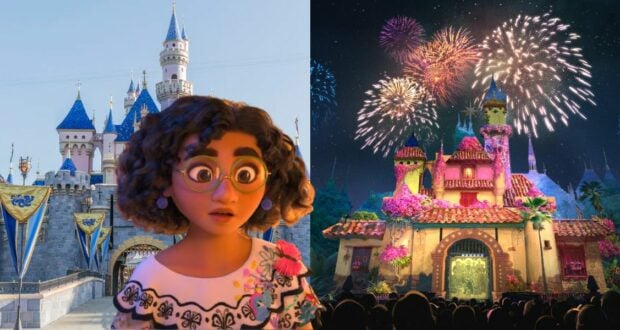 We don’t talk about Bruno, but we sure do love talking about all things Encanto (2021)! Disney’s new animated film is taking the spotlight as Disney prepares to welcome its newest nighttime theme park spectacular.

The Walt Disney Company is gearing up for its 100th Anniversary Celebration. Not to be confused with Walt Disney World Resort’s current 50th Anniversary celebration, the Disney company’s 100 years of magic will be celebrated with multiple festivities, with the heart of the experiences taking place at Disneyland Resort.

So, of course, what’s a Disney celebration without projections and fireworks? Disneyland Resort has introduced a new nighttime spectacular coming to Disneyland Park in 2023 called “Wondrous Journeys.”

Disney has revealed an up-close look at the development of the new spectacular, which will celebrate 100 years of Walt Disney Animation Studios. Disney Park Guests will see nods to multiple films released by the studio over the past century, along with its music, characters, and special moments.

Ready for a sneak peek look at the transformation and the music being Disneyland’s “Wondrous Journeys?” Disney describes the behind-the-scenes look with:

“This all-new nighttime spectacular will celebrate 100 years of Walt Disney Animation Studios in an experience that ignites the dreamer in all of us, and will also feature an original new song, “It’s Wondrous,” that promises to capture your heart and spark your imagination.”

The new nighttime spectacular, “Wondrous Journeys,” will begin on January 27, 2023. Don’t wait to plan your visit to Disneyland Resort’s Disney Park and Disney California Adventure Park for the new year!

2022-12-21
Jamie Sylvester
Previous: Disney Stock On Track to Have Worst Year in 5 Decades
Next: Johnny Depp and Amber Heard Finally Settle Their Legal Battle, and Here’s Why That’s Bad