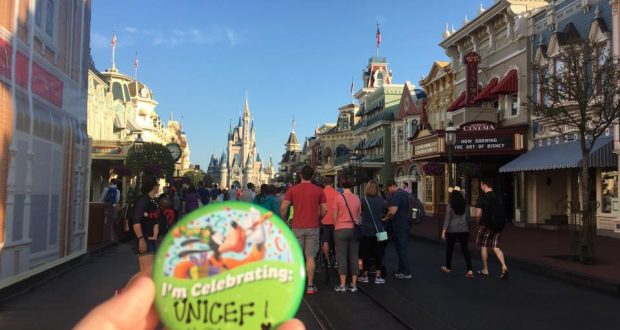 A woman planned to raise money for UNICEF through donations made on crowdrise.com as she rode It’s a Small World in Magic Kingdom at Walt Disney World from open to close on Thursday, February 2, 2017.  The hours of operation on that day were 9AM – 8PM, so that would be 11 hours straight of It’s a Small World.  She planned to post live updates to Facebook and Twitter.  She was wearing a sign saying what she was doing and logging the number of times she rode the ride as well as the total donations.  At some point in the day she was stopped by Disney management and asked to either quit riding the attraction or shut down the website.  She ultimately ended up leaving the theme park as she felt that she would be watched if she stayed.  She has currently raised $2,750 for UNICEF.

While the intentions are good, Disney is very protective over their brand and what is carried out within the theme parks.  Disney is big on fundraisers and giving back, but this is probably a scenario where Disney should have been contacted and all rules and guidelines researched before attempting this kind of fundraiser.

Wow—this is a tough category to narrow down!  There are so many classic experiences at Walt Disney World that have survived over the years, and many of them are essential to my family’s vacations.  Their nostalgia contributes to their magic, but they are also fun experiences in their own right.  Here are the top 10 that I selected, but know that there are a lot of honorable mentions!

Walt Disney himself was inspired to build Disneyland where parents and children could have fun together while watching his daughters ride a carrousel at a local park.  It is a centerpiece to Fantasyland in Disney parks, and a nostalgic ride on this classic is a must-do.  Prince Charming’s Regal Carrousel was built in 1917, so not only is it a classic Disney attraction, but it is an actual classic.

Spaceship Earth is classic Epcot—even though it has been updated and the “descent” has changed over the years (and former narrators may be preferred by certain people).  This is a must do every trip—I love the detail of the audio animatronics and the scenes they are in.  Plus the smell of Rome Burning—need I say more?

7.  Tie—Hall of Presidents and Carousel of Progress

These attractions have their roots in the 1964/65 World’s Fair, so definitely classic Disney.  The Carousel of Progress follows a family through all of the advances in technology and is just an updated version of what appeared at the World’s Fair.  The pre-show as you wait outside is a great look at what went into the World’s Fair.  And you can’t get much more classic than the Sherman Brothers’ “There’s a Great Big Beautiful Tomorrow.”

Hall of Presidents goes back to Great Moments with Mr. Lincoln and Walt’s interest in American History.  The Liberty Square attraction pays tribute to every US President, and was another 1971 opening day attraction.

It was the WEDWay PeopleMover (for WED-or Walter Elias Disney-Enterprises that was the original company that included Imagineering).  Passing overhead in Tomorrowland, the PeopleMover takes you through various attractions in Tomorrowland, and give you a great Birds Eye View of that section of the park.  We love to take a break and “zip” around on this attraction, look at the original Epcot model, see Space Mountain at a slow speed, and look at the woman with the crazy hair styling contraption.  Then there are classic lines like, “Paging Mr. Morrow.  Mr. Tom Morrow.  Your party from Saturn has arrived.  Please give them a ring.”

Iconic Disney—a gleaming monorail transporting guests around the theme parks.  The first version was in Disneyland and when Walt Disney World was built the monorail became more of an actual transportation method than an attraction.  I highly recommend catching a ride on the “highway in the sky” even if you don’t need it for transportation.  The best sightseeing route is the Ticket & Transportation Center to Epcot, but a loop around the resorts is fun too.  “Please stand clear of the doors. Por favor manténganse alejado de las puertas.”

Such a sentimental/nostalgic favorite!  People will wait in line for an hour to ride this very short dark ride.  Peter Pan’s Flight features scenes from the movie and classic effects like flying over London with the cars driving down the street (bicycle chains painted with glow in the dark paint).  It really is sentiment and nostalgia that make this ride fantastic—it certainly isn’t any technological breakthroughs.  For my family this is a must-do, but we don’t wait in line for it—hit it first thing or get a FastPass+ for it.

Oh how I love the corny Jungle Cruise!  Our tour down the rivers of Asia, Africa and South America takes on a comical tone as each skipper puts his or her own touch on the attraction.  Some of the “jokes” you will hear over and over “the backside of water,” but they still make me laugh “watch out for Ginger, she snaps.”  And yes, I do sometimes say the lines with the skipper under my breath.  Jungle Cruise was an opening day attraction at Disneyland and has gone through some changes over the years, but the classic elements of the setting and audio animatronic animals remain the same.  This one is worth the wait—and it is especially fun to do at dusk or night.

Walt Disney loved railroads and having a track that circled the park was a priority for him.  Today’s Walt Disney World Railroad consists of trains that were built between 1916 and 1928 and used in the Yucatan in Mexico.  Once restored they became a part of the very fabric of the park.  Without the sound of the train whistle Walt Disney World just wouldn’t be the same.  There are stops at Main Street USA, Frontierland and Fantasyland and you get on or off in any of those locations.  I recommend taking some quiet time in the afternoon and doing the full circle tour of the Magic Kingdom.

1.  Tie—Pirates of the Caribbean and Haunted Mansion

These two attractions would rank at the top of any Top 10 list I would put together, but the fact that they are classics make them even more incredible.  These were some of the last attractions that Walt Disney himself oversaw development, and their use of audio animatronics was and is revolutionary.

In Pirates the life-like scenes immerse you in the pillaging of a Caribbean village.  Changes have been made and additions put in during recent years to tie in to the success of the Pirates of the Caribbean movie franchise, but they don’t seem to detract from the classic storytelling in the attraction.

Haunted Mansion is a fun look at the afterlife—with spooky scenes, ghosts created by classic special effects, and a fabulous soundtrack.  Imagineers continue to “plus” this attraction too—which just perpetuates its popularity.

A trip to Walt Disney World would not be complete without a ride (or more) on these attractions.

What is your favorite “classic” Walt Disney World experience?  Tell us in the comments below or on Facebook.