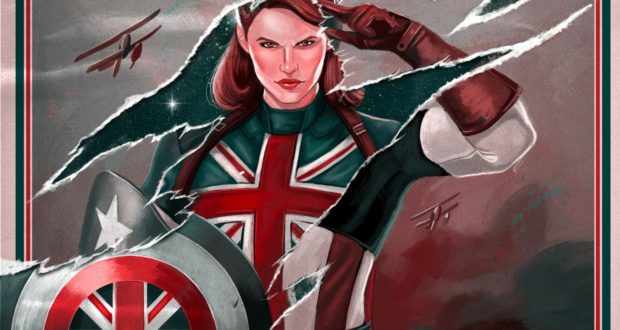 What If Episodes To See Captain Carter

On Wednesday, August 11th we will see the first episodes of Marvel Studios What If…? added to Disney+. This series is going to flip the script and reimagine famous events throughout the MCU. This series will bring a variety of famous heroes back and one of those who might get a different story is Agent Carter.

Agent Carter becomes Captain Carter after receiving super-soldier serum. It seems that we will be seeing her in multiple episodes.

During a recent press conference, the shows executive producer, Brad Winderbaum said: uh, w-we realized, I think, early on in development, as we were starting to get, uh, uh, A.C.’s scripts, uh, and starting to-to-to-to look at the arc of the series, that there was gonna be a character that-that, um, that-that bubbled up and-and became more important.  Not more important than the rest, but had-had a-had a strong relationship with The Watcher, who is our-who is really our driving force behind the series.  And that’s Captain Carter.  Um, and w-we realized, as we started developing the second season, that Captain Carter was gonna be the character we would revisit. Um, uh, in every season, uh, and continue that adventure.  Um, obviously, we’re telling a story on a giant, multiversal [PH] canvas, uh, so you never really know, um, who’s gonna pop up where and when.  Uh, it’s very much an anthology, but there’s always opportunity for-for, uh, for fun connections to be made.

What If..? is going to be a very different show as it allows MCU to tell unique stories that we have never thought about before.

2021-08-04
Jennifer Retzlaff
Previous: Pricing Revealed for Star Wars: Galactic Starcruiser
Next: 50 Favorites That Have Yet To Return Since Disney World’s Phased Reopening