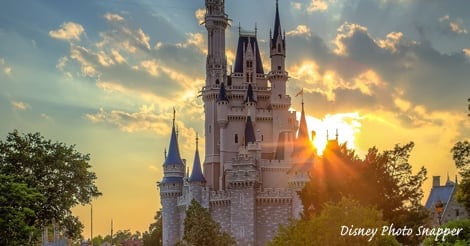 In addition to other things like creating the first full-length animated feature in 1937 and building and opening Disneyland in 1955, Walter Elias Disney had another project in mind. It was called simply “The Florida Project.” Once Disneyland was open and wowing thousands upon thousands of Guests, Walt began work on another theme park—this time in the swamplands of central Florida. The first acres he bought only cost him about $180 each since he didn’t use his real name in those initial transactions. He feared that if it became known that he was the one purchasing the land, price gouging would be inevitable, and he was right. Once the Orlando Sentinel got the idea that it was Walt Disney buying up the land, Walt’s per-acre cost skyrocketed—to the tune of $80,000 per acre at one point.

“The Florida Project” would become Disney World, but on December 15, 1966—perhaps the most monumental date in all of the story of Disney World—Walt succumbed to complications from his newly-diagnosed lung cancer. The world was sad, but because of Walt’s determination, drive and dreams, his legacy lives on even today. Here are 10 more of the most monumental dates in the story of the most magical place on earth.

This is the day Walt Disney World first opened to the public. Only Magic Kingdom was open at this point. About 10,000 people were in attendance for the opening. There were approximately 5,500 Cast Members at work on Opening Day. The attractions in operation that day included Dumbo the Flying Elephant, the Hall of Presidents, Haunted Mansion, It’s a Small World, Jungle Cruise, Mad Tea Party, Peter Pan’s Flight, Swiss Family Robinson Treehouse, Tomorrowland Speedway, Walt Disney World Railroad, the Enchanted Tiki Room and others. The Liberty Square Riverboat opened the next day on October 2. Only two resort hotels were open on Disney World’s Opening Day—Disney’s Contemporary Resort and Disney’s Polynesian Village Resort. The official dedication ceremony took place on October 25, 1971. EPCOT opened on this day and was originally called EPCOT Center. It consisted of Future World and the World Showcase. Opening Day pavilions in Future World included the Journey Into Imagination pavilion, The Land pavilion, Communicore East and West, the 18-stories-tall Spaceship Earth, Earth Station, the Universe of Energy pavilion and the World of Motion pavilion. The World Showcase only had nine countries on EPCOT’s opening day. They were Canada, France, Japan, Mexico, China, Italy, Germany, the United Kingdom and the United States. When EPCOT first opened, it was the largest theme park in the world at 260 acres. A part of the collaborative efforts of Marty Sklar and Michael Eisner, Disney’s MGM Studios opened on this day. It was a rainy day, but that didn’t stop eager Disney fans from flooding the park. It was the largest Opening Day press event in Disney’s history, and so many people showed up that the parking lot was closed at 9:15 a.m., just an hour after the park opened. On the park’s Opening Day, there were only four themed areas—Hollywood Boulevard, Echo Lake, Streets of America and Animation Courtyard. The Great Movie Ride was one of five attractions in operation that day. Admission to Disney’s MGM Studios on Opening Day was $29 for adults and $23 for kids! Disney’s Animal Kingdom opened on this day. It was Disney World’s fourth park—and at 500 acres, it was also Disney’s largest. Animal Kingdom cost $800 million, and on Opening Day, there were five attractions, nine exhibits and twelve live entertainment shows. Only Africa and Dinoland U. S. A. were open that day. (Asia would open in early 1999.) Just 75 minutes after opening, the park reached its capacity. This is the day the New Fantasyland expansion opened at Magic Kingdom. It was the largest expansion in Disney World’s 41-year history, growing Fantasyland from just 10 acres to 21 acres! New attractions in the new expansion included Under the Sea—the Journey of the Little Mermaid, Enchanted Tales with Belle, a second Dumbo the Flying Elephant, Beast Castle, Be Our Guest Restaurant and Storybook Circus. Princess Fairy Tale Hall didn’t open until 2013, and Seven Dwarfs Mine Train didn’t open until May of 2014. On this day, the new Frozen Ever After attraction opened in the Norway pavilion at EPCOT’s World Showcase. In 2014, the Maelstrom attraction closed to make way for the new Frozen-inspired ride, which used the same track and the same boats as the previous ride. In the new attraction, Guests boarded a Norwegian vessel and were taken on a tour of Arendelle. Some of the most state-of-the-art audio animatronics in the park were used in the attraction which was an instant hit with Guests. On this day, the long-anticipated World of Pandora opened at Disney’s Animal Kingdom. It was inspired by James Cameron’s Avatar and focused on the moon of Pandora. The land features the floating mountains of Pandora, its alien wildlife and even its bioluminescent forests and plants. Two new attractions were also in operation that day—Avatar: Flight of Passage, which is a 3D-simulated ride on the back of a mountain banshee and Na’vi River Journey, which is a peaceful ride aboard a reed boat through a rain forest on Pandora. Toy Story Land opened at Disney’s Hollywood Studios on this day, and the crowds were unscathed by the pouring rain. In fact, it rained all day long, but the rain didn’t dissipate the crowds. Two new attractions were also open in the new land—Alien Swirling Saucers and Slinky Dog Dash. At one point during the day, there was a four-hour wait in the queue for Slinky Dog Dash. Also unveiled that day was a new entrance to the uber-popular Toy Story Mania and a new quick-service venue called Woody’s Lunch Box.