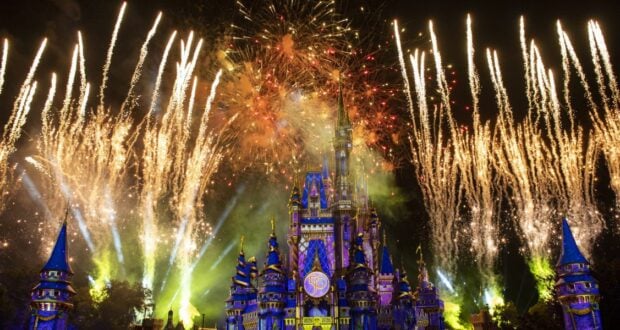 If you live near or are staying at Walt Disney World Resort’s Magic Kingdom theme park area, take note, as you can expect to hear fireworks testing at the Disney Park over the next couple of nights.

Both nighttime spectaculars have now been deemed as temporary as Walt Disney World announced the return of “Happily Ever After” to Magic Kingdom, after Disney fans pleaded for Disney to drop the lackluster 50th Anniversary fireworks, “Disney Enchantment.”

Massive barges fill the World Showcase Lagoon at EPCOT for its “Harmonious,” but again, the Disney fandom isn’t impressed with the show, leaving Disney to announce it will be a temporary show through the end of the 50th Anniversary celebration.

Disney has yet to announce the “Harmonious” replacement, but rumors suggest the previous “EPCOT Forever” will take its place.

RELATED: Another Fire Breaks Out During Nighttime EPCOT Show

Now, Disney has revealed testing is necessary, which is suggested to be for Disney’s holiday videoing.

On Friday, November 12, Walt Disney World Cast and Community took to social media to announce, “Tonight through Nov. 14, we will be launching fireworks at Magic Kingdom Park between 11:30 p.m. and approximately 2 a.m. We apologize to our neighbors and Guests for this late-night inconvenience..”

If staying at one of the Magic Kingdom Resorts along the Resort Monorail path, including Disney’s Contemporary Resort, Disney’s Bay Lake Tower, Disney’s Polynesian Village Resort, or Disney’s Grand Floridian Resort, you will likely see and hear the testing through the middle of the night.

We suggest either staying up late to enjoy the testing or finding a good set of earplugs!

2022-11-13
Jamie Sylvester
Previous: Check Out These Shocking First Drafts of Disney Characters
Next: The Disney World Typo That Drives Us Crazy