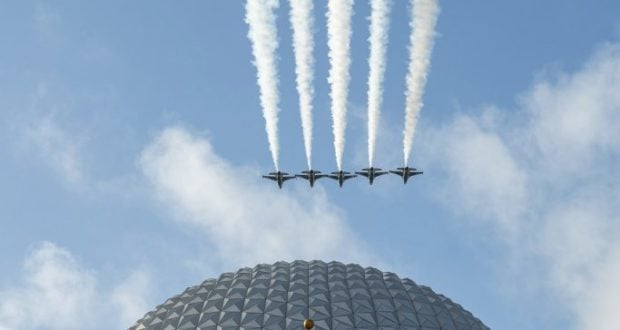 Yesterday, October 29, the U.S. Air Force Air Demonstration Squadron – “The Thunderbirds” – flew over Walt Disney World Resort to kick off November’s National Veterans and Military Families Month and honor current, past and fallen military heroes. Check out the details, video and photos below as shared by DisneyParksBlog.

The Thunderbirds’ flyover took place almost a decade to the day after their last visit to Walt Disney World, on Oct. 27, 2010. This time, “America’s Ambassadors in Blue” performed two passes above Spaceship Earth at EPCOT, including the famous “Delta Break” maneuver.

The flyover was both sentimental and meaningful for Walt Disney World, which has long celebrated members of the United States military. Fittingly, The Walt Disney Company founders, Walt and Roy Disney, both served the United States in uniform during World War I. The Walt Disney Company has also been a leading proponent of hiring, training and supporting military veterans with the Heroes Work Here initiative, the Heroes Supply Here program and Disney Veterans Institute.

Footage of the flyover will also be included in this year’s virtual Snowball Express conference hosted by the Gary Sinise Foundation, which serves the children of fallen military heroes, their surviving parents and guardians, and Gold Star families.