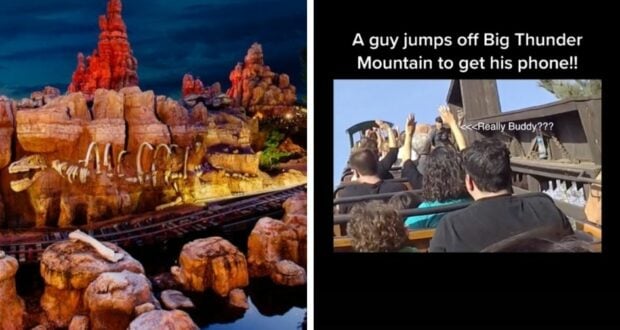 Howdy partners! For your safety, remain seated with your hands, arms, feet, and legs inside the train—and be sure to watch your kids. If any of you folks are wearin’ hats or glasses, best remove ’em—’cause this here’s the wildest ride in the wilderness!

This may be one of the most popular ride announcements at Disney. Everyone who loves riding Big Thunder Mountain Railroad may even know it by heart. In reality, every ride tells Guests to remain seated and keep their hands, arms, feet, and legs inside the ride vehicle at all times. While it may sound repetitive, you might think, “Why do we need to be told this? Doesn’t everyone already know?” Well, the answer to that is, apparently not.

TikToker Just Disney visited Disneyland Resort and decided to ride the runaway train and saw something absolutely unbelievable. As the train was making its way up the largest hill, a man riding in one of the front rows JUMPED OUT of the moving cars. The man runs down the flight of stairs next to the cars to retrieve what looks like a dropped cell phone. He then runs back up the hill to get into the car and apologies to everyone. 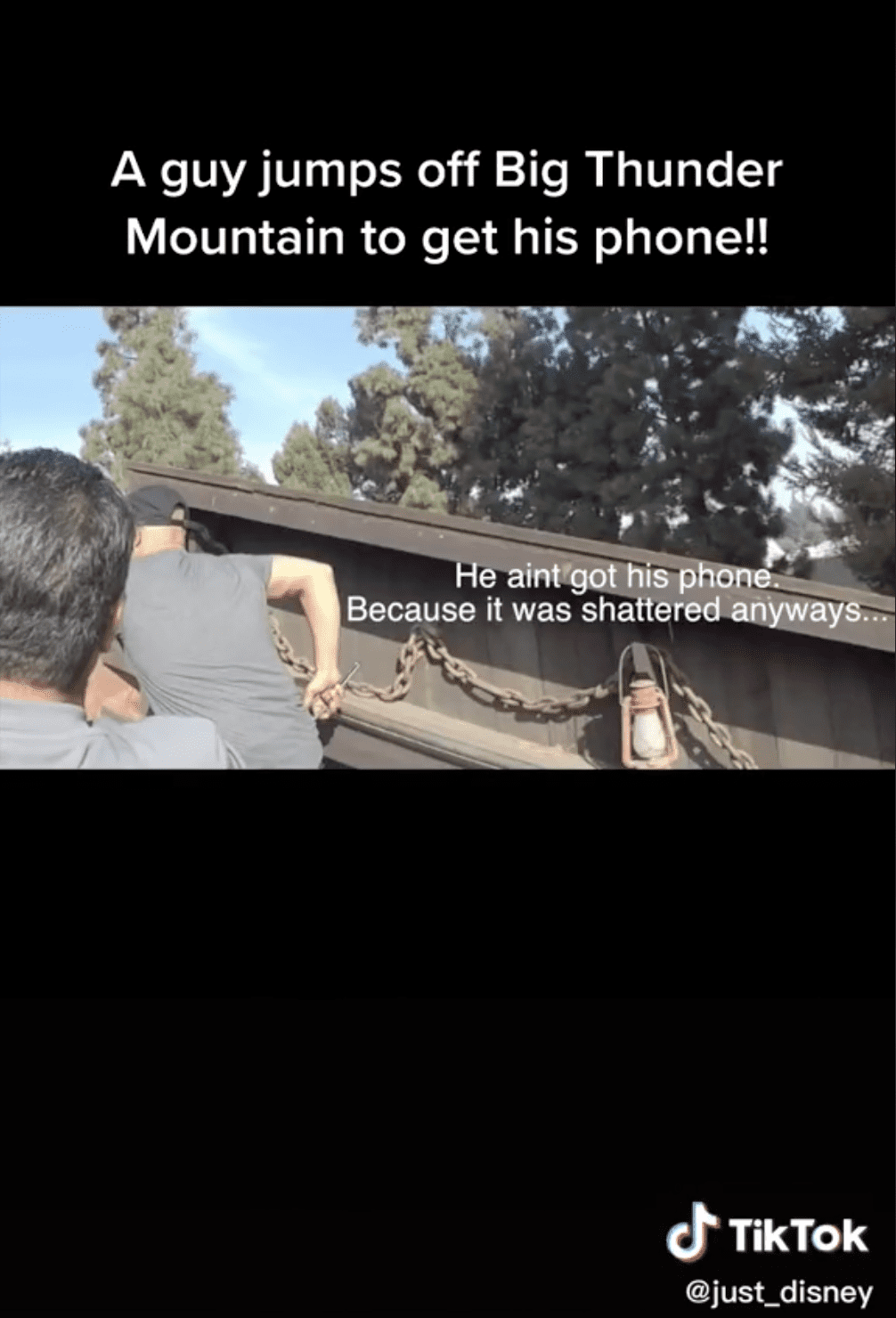 You can watch the stunning video below.

Unfortunately for everyone else riding the attraction, Disneyland Park has eyes everywhere. They are able to see what is going on at all times, and they say what happened in this instance. The train came to a stop and everyone was forced to evacuate. The Guests walked down the hill and through the tunnel they had just come out of. While being evacuated off of a ride can be a fun experience, having to do so because one Guest couldn’t follow simple instructions, probably made it less enjoyable. 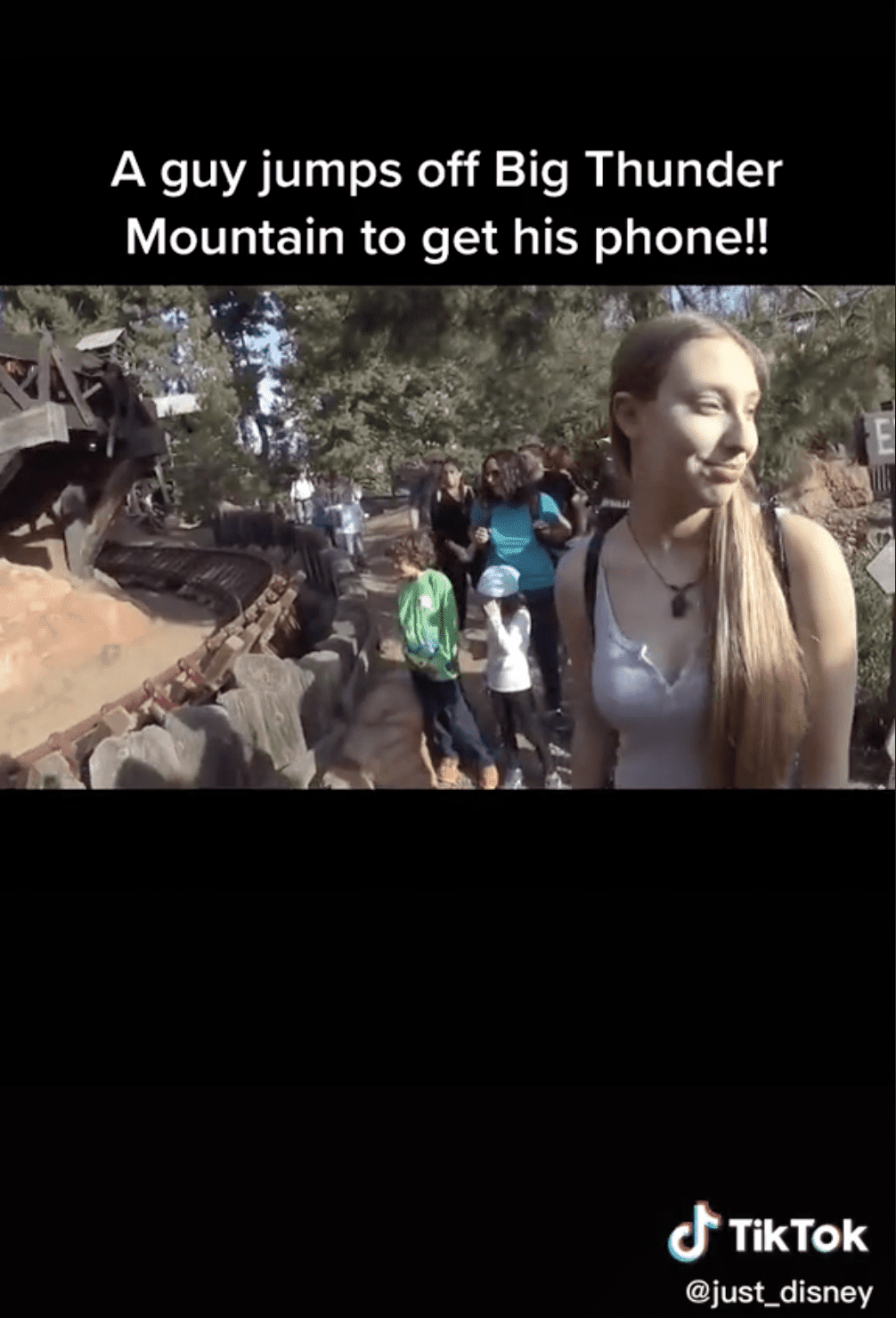 Now, we don’t know what happened to the Guest who jumped out of the train. However, when a Guest does something dangerous like that, Disney does reserve the right to remove them from the Park. At the end of the video, Disneyland security can be seen waiting where the Guests exit.

If you do happen to lose something on a ride — such as a phone, Mickey ears, or a hat, please remember to not get out of the ride vehicle. Wait until the ride ends, then tell a Cast Member. While they will not be able to retrieve your lost item right away, they may be able to snag it at the end of the night and turn it in to lost and found. You can file a report with a Cast Member at City Hall, and they will let you know if they retrieve your item. It is best practice to put anything you might lose in your bag before the ride starts, that way you don’t need to worry.

Have you ever seen another Guest do something crazy like this?

2022-03-20
Krysten Swensen
Previous: Another Disney Park Is Closing Due to COVID
Next: This Disney Mozzarella Stick May Be The Biggest We’ve Ever Seen