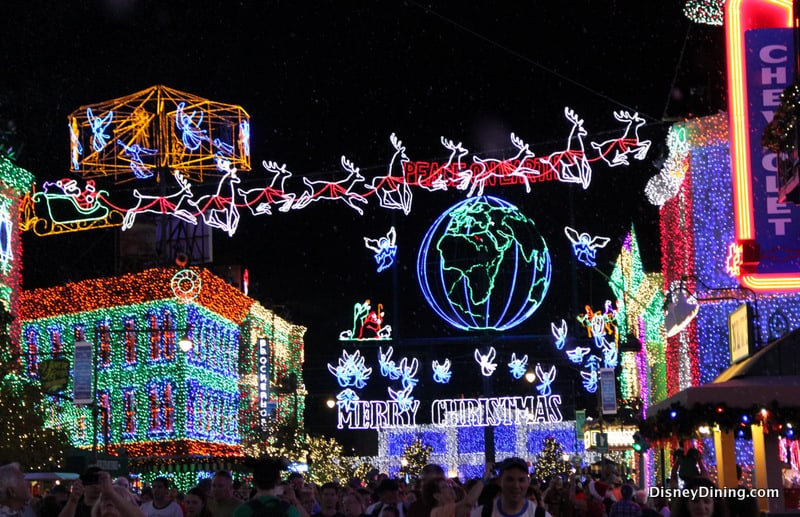 Treat Yourself to “The Osborne Family Spectacle of Dancing Lights”

Treat Yourself to “The Osborne Family Spectacle of Dancing Lights”

What is The Osborne Family Spectacle of Dancing Lights? It is a light display that began at Disney’s Hollywood Studios in 1995.  It has grown to 5 million lights.  The real beginning of this light spectacular was at a family home, the Osborne family home to be precise, in 1986.  Jennings Osborne, an Arkansas businessman was asked by his little daughter Breezy if they could decorate their home with Christmas lights.  Osborne began by stringing together 1000 red lights to decorate his home.  This delighted his daughter and encouraged him to add more each year thereafter.  He even purchased the two lots adjacent to his so that he could continue to expand the light show.  Eight years later the Osborne family lights had grown to three million.  Major elements of his display included a large globe with Little Rock and Bethlehem marked on it; two carousels of lights that rotated; a 70 foot tall Christmas tree; a canopy with 30,000 red lights. It could be seen from the air up to 80 miles away.  As you can imagine this drew film and news crews from around the world.  The Osborne family lived on one of the main streets of Little Rock and the traffic mess that resulted from all the attention also drew harsh criticism from his neighbors. The display was lit for 35 days from dusk to midnight, every day, by 1993.  Osborne was met with lawsuits brought by six of his neighbors complaining about the traffic issues.  What did Jennings Osborne do? He added three million more lights, and hired off-duty officers to assist his neighbors in getting on and off their property.  This was not enough to offset the complaints. The county court responded with an injunction. Lights for only 15 days and between 7PM and 10:30PM were allowed. The issue went between courts and ultimately to the Supreme Court where the injunction was not removed.

Enter representatives from Walt Disney World.  Disney began discussions with the family’s lawyers and eventually with Jennings Osborne himself.  The Osborne’s were very familiar with the Studios and being huge Disney fans liked the idea of their light display moving to the Florida Park.  In 1995 the lights were moved to Residential Street and then later moved to its current location on the Streets of America.  Jennings Osborne did not sell the lights to Disney for cash; rather he accepted their hospitality for his family from Dec. 23 to the New Year. He came to Hollywood Studios until his death in 2011.

You now enter into a wonderland of twinkling lights and rotating displays, 130 angels flying overhead, and many light sculptures. The Disney version of “snow” falls making a truly wonderful wintry wonderland display.  The lights “dance” to the music every 10 minutes. In between the dance, all of the lights remain on which makes it great for getting photographs of the family. The dance is really choreographed lights changing colors and moving to classic Christmas music.   In the interest of being more energy-efficient all of the lights have been changed to LED lights. Some of the original light elements from the family property are still in use and you will recognize them as you walk through the Streets of America.  Others change a bit from year to year.  There are even hidden Mickey’s in the display, so keep your eyes open! In transferring the lights to Walt Disney World some Halloween lights were inadvertently included in the shipment via four 18-wheel trucks.  There is a Halloween Cat that the Disney Imagineers include each year, always placing it someplace different from the year before. See if you can find it. At the entrance you will see a life-size Manger scene, complete with Angels.

There are eight songs that the lights “dance” to that only add to the magic of the scene.  The song list is:

There are Hanukkah lights included in this Holiday display too. And can you find the mannequin leg lamp from “A Christmas Story”?  You will find several family photo op places along the streets, just please, no flash photography. If you have a manual exposure setting on your camera this is the perfect time to use it.

There are 350 miles of lights to put you in the Holiday spirit. For those who make their own light shows at home, this means there are 32.2 miles of extension cords.  It takes 21,000 hours to install the lights.  Since “snow” has been added they now have 66 snow making machines and use 100 gallons of snow fluid to give you the idea that you are in a flurry of snowflakes as you walk down the street.

Now, as if seeing the lights, the snow, and hearing the music is not enough, there are real Treats to be had in the Streets of America. There is a Cookie and Beverage kiosk about one-third of the way down the first street.  It has Souvenir Santa Mickey Buckets with Popcorn or Caramel Popcorn, Cotton Candy, Holiday Cupcakes, a Souvenir Mug with Hot Cocoa flavored with Gingerbread or Hazelnut flavoring, Mickey’s Crisped Rice Treat, Holiday Cookies, bottled water, Coke bottled beverages, Non-alcoholic Egg Nog, Spiced Egg Nog, bottled beer, Sutter Home wines, and Sparkling Wine.  The Gingerbread and Sugar Cookie assortment are beautifully decorated and individually wrapped.  They have a traditional Gingerbread Man, Santa head, Snowman Head with Top Hat, Christmas Tree, Candy Cane, Stocking, and Snowman.  I can’t resist the flavored Hot Cocoa and the cookie assortment! Take your time walking through the streets while you enjoy this Christmas treat.  You may even see Cast Members strolling through the crowd selling the popcorn buckets and light up necklaces.

If you somehow make it to the end of the display and you find yourself wanting that treat you passed up earlier, or maybe feeling like having another one?  Then you are in luck.  At the end of the street is the Writer’s Stop, on your left.  This little shop is often overlooked but it is a not-to-be-missed spot for many of the rest of us.  One of its most famous cookies is the Carrot Cake Cookie that is two carrot cake thin cookies with a filling of cream cheese goodness.  It is big enough to share too. There are other cookies here and a wide array of pastries that pair well with their beverage offerings. You can choose Bagels, Muffins, Cinnamon buns, Crisped Rice bars, 100% Arabica coffee, bottled water, fruit coolers, café coolers, Cappuccino, Chocolate Milk, Double Espresso, Espresso or Americano, Flavored syrups to add, Hot Chocolate, Hot Tea, Iced Cappuccino or Latte, Iced Mochaccino or Mocha Latte, Island Chiller, Milk, Mochaccino or Mocha Latte, Powerade, and Sodas.  There is also a collection of merchandise not found in other locations, packaged snacks and even good reads to be purchased here.

There are kiosks selling Glow with the Show ears that flash and turn different colors along with the music.  Make sure you watch your children’s faces as they experience this event, it is priceless.

The Spectacle is available to every Hollywood Studios guest at no additional cost. The show runs through January 5, 2014.  The lights are turned on at dusk, usually around 6PM.  Sometimes a guest is chosen by a Cast Member to flip the giant light switch each night to begin the show. There are usually characters there too.  The entrance this year is just past the Phineas and Ferb meet and greet area and guests are guided in by Cast Members with flashlights to move in one direction through the display.  There are reportedly over 40 Mickey’s in the lights, see how many you can find! Santa Goofy is set up nearby in his Goofy’s Winter Wonderland where you can meet him in daylight hours as well as evening. Goofy is located where the Manger scene used to be, for those who have visiting the light display before.

If you really don’t like crowds, avoid weekends if possible. You should be ok if you go before the week leading up to Christmas.  Another way to beat some of the crowd is to wait for the initial onslaught to dissipate and arrive at the beginning around 30 to 40 minutes after they are turned on. If this is your first time to see the lights, I encourage you to line up 30 minutes prior to the start time so you can see the dramatic change when the lights switch on.  The lights remain on up to one hour after Park closing, so you can wander through here with it pretty much empty. This is a great time to take photos too.  Make sure you grab that hot cocoa before closing time though! 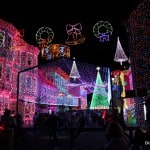 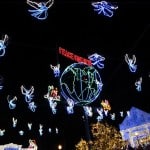 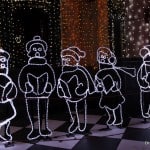 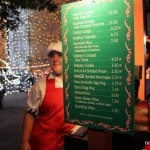 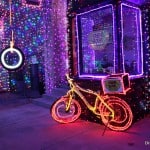 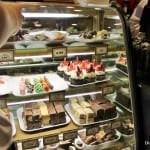 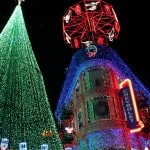 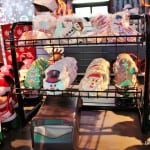 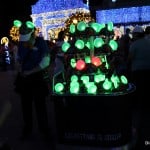 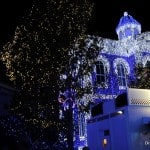 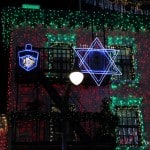 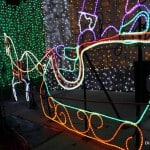 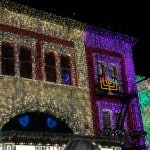 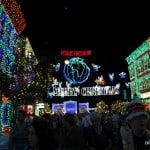 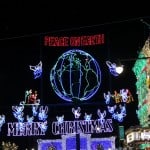 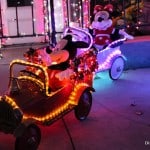 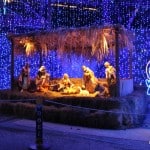 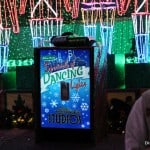 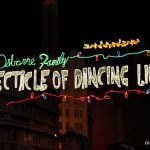 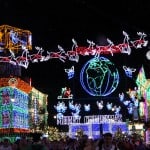 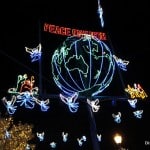 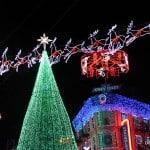 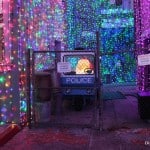 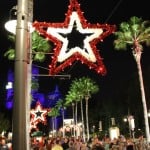 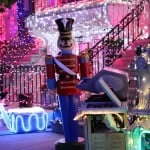 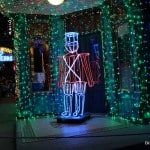 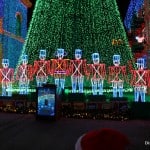