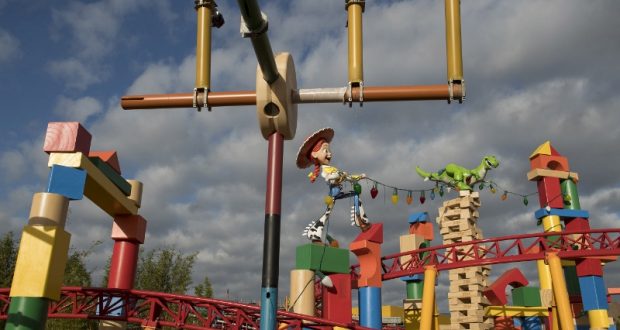 On March 22, I was lucky enough to be part of a Toy Story Land preview. The land still has a long way to go before it opens in 100 days on June 30, 2018, but it was exciting to see what is there now, and to think about what is to come. We weren’t allowed to take pictures, but Disney did provide us with some fun images.

The tour started with information from two gentlemen from Walt Disney Imagineering. Toy Story Land will take guests into Andy’s backyard, where he’s used his toys and his imagination. The land will feature two new rides; Slinky Dog Dash and Alien Swirling Saucers. Toy Story Mania! will also be part of the new land, and guests will feel as if they’re moving from the backyard to Andy’s room and the popular attraction. There will be a counter service restaurant called Andy’s Lunchbox. The toys propped up a Woody’s Roundup lunchbox and are using a thermos to keep it open. The eatery will feature “old time favorites served with a contemporary flair”. Soda floats will also be served.

We were given one new bit of information with the tour today. Sheriff Woody, Buzz Lightyear, and Jessie will all be on hand to meet guests. In fact, you’ll be greeted by Woody as you enter the new land.

Part of the fun of Toy Story Land will be the idea that you have shrunk down to the size of a toy when you enter. You’ll be the size of a green army man. There will be oversized plants, grasses, and bushes to help with the illusion, and the vegetation will also block off the Star Wars: Galaxy’s Edge construction in the distance.

From what we could see, only Slinky Dog Dash is currently recognizable. It almost looks like it’s ready for passengers. Everything else still needs work, but they are definitely making progress. We were told that the area literally changes each day because it is getting that much closer.

It’s obvious that there will be lots of details in Toy Story Land. You can see Andy’s footprints in the cement. The lights and speakers will be on poles that are fashioned from Tinker Toys. On Slinky Dog Dash the Jenga set looks like it could topple over at any moment.

Since the entrance to Toy Story Mania! is going to be moved, I asked what is going to happen with Pixar Place. I was met with a couple of grins, and then told that information hasn’t yet been announced. I had previously been told by a Cast Member that Pixar Place will become a backstage area, so I don’t know if something is planned or not.

Andy’s Lunchbox and the Carnival Game Box right now are solid structures but you can’t tell what they will be unless someone points them out. Alien Swirling Saucers was off in the distance, but we were kept behind a barrier and couldn’t see much more than the top of the building. Still, the small taste that we were given today was enough to make me even more excited about the future. We’ll be given two more tours in the next couple of months, and I’ll update you with the progress. 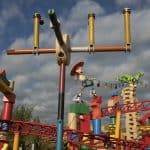 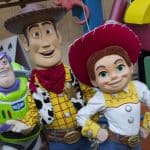 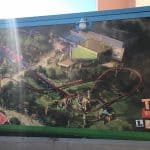 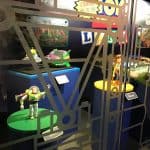 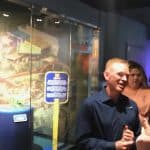 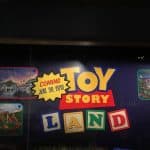 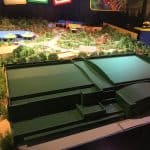 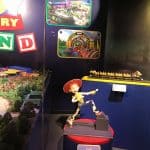 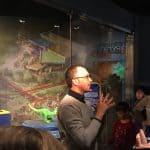