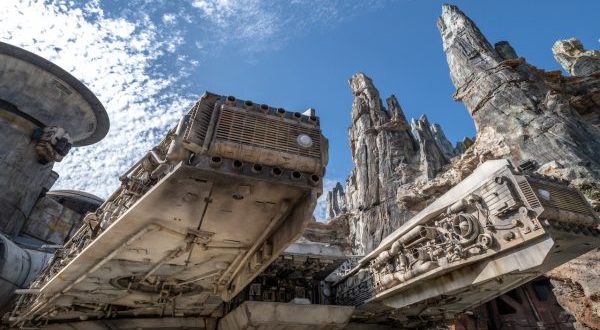 Okay, true confession:  I am not a Star Wars fan.  There I said it.  I’ve watched the original 3 movies, and I like R2D2, C3PO, and the Ewoks.  I haven’t seen any of the prequel movies, I watched The Force Awakens, but I have not seen any of the other movies in that trilogy—or really anything else in the Star Wars Universe.  So really I know nothing about Star Wars characters, history, plots, or canon.  In fact, more than once I have called Mark Hamill “Scott Hamilton.”  I know, Star Wars sacrilege.  When they announced they were building a Star Wars Land on both coasts I was not impressed. I figured it was something I would tolerate, but not go out of my way to experience.  However, I have actually enjoyed my visits to Star Wars Galaxy’s Edge at Disney’s Hollywood Studios.  So, even if you think you won’t understand what is happening (like me) or the theme of the land doesn’t fit your usual interests (also like me), give it a try—there is a lot to like.

Black Spire Outpost on Batuu is unlike anything we see in other parks when it comes to characters.  In fact, it is a little bit like old school Walt Disney World when characters roamed around, and you had chance encounters with them.  It was spontaneous.  In Star Wars Galaxy’s Edge you see the characters in their environment, and they are going about their normal day with Chewbacca repairing spaceships, Kylo Ren wreaking havoc, and the Stormtroopers patrolling in everyone’s business.  It really adds a layer of authenticity to the land.  But it isn’t just the obvious characters.  Every “Cast Member” you meet in Batuu has a role within the outpost and a story.  So, you may hear words from their native language, and you may ask them what brings them to Batuu.  I think anyone can appreciate the interactive element the characters bring to Star Wars Galaxy’s Edge.  And everyone knows who Chewbacca is, right?

6.  See it through the Eyes of a True Fan

Many of us non-fans end up spending more time than we might normally in Star Wars Galaxy’s Edge when we visit accompanied by a true diehard fan.  One who knows all the canon, all the obscure characters, and knows the movies by heart.  If you can let yourself experience the land through their eyes it will bring a new appreciation, and it is just fun to watch them so engrossed in their element.  My youngest son built a droid in the Droid Depot back in August during a preview event.  He was beyond excited, and just watching his face as he picked out the pieces, constructed his droid, and interacted with it through out Batuu put a smile in my heart.  In October I visited with just such a fan.  Having her tell me the stories around the droids we saw, explain the significance of the items in Dok-Ondar’s Den of Antiquities, and just seeing her reaction when we rounded the corner and saw the Millennium Falcon—that made it all the more enjoyable for me.

With the opening of Star Wars Galaxy’s Edge, Disney’s PhotoPass service initiated some very creative PhotoPass opportunities.  There are a couple of areas of the land where you stand in one spot and a remote camera zooms in and out so that you take in the entire land, and then it zooms in right on you.  There is another spot where it takes a 360 degree image with you in the center.  There are “magic” shots that have tie fighters or X Wings in the background (I googled those terms), and some with creatures inserted like Porgs.   These are fun keepsakes.  If you are looking for these photo ops and want to ask a Cast Member where to go, remember, in Batuu they are called Image Captures or Image Scans.

Everyone can unite in a good drink, right?  And in Star Wars Galaxy’s Edge they have some fun and unique options for you to try.  If you have a reservation, or get lucky with walk-up availability, you may want to try Oga’s Cantina.  Inside you will find a heavily Star Wars themed environment, but it is also pretty cool just to take in the details and the fun atmosphere even if you don’t know the significance of it all.  The menu is heavy on drinks, light on food, and it offers both alcoholic and non-alcoholic options.  If you want to try something really different the Fuzzy Tauntaun is my recommendation—and don’t panic when your mouth gets tingly.  Without a reservation there are still plenty of opportunities for drinks.  The Milk Stand offers blue and green milk.  This plant based flavored blend is available “regular” ore with alcohol.  It is worth a try—the blue is more fruity, the green more floral.  And of course, there are the themed Coca-Cola bottles as well if you aren’t as adventurous.

I’ve spent a lot of time roaming around the Marketplace in Black Spire Outpost.  A LOT of time.  Since I can’t ride Smuggler’s Run due to motion issues, this is my hang-out spot while waiting for my travel companions.  The atmosphere here is quite beautiful.  It reminds me of Morocco in Epcot’s World Showcase.  There are small stalls filled with different types of merchandise, and they’ve done a great job so far of keeping you immersed in the fact that you are on Batuu with items that look handcrafted.  As a theme park fan anyone can appreciate the detail and theming the Imagineers put into this space, and enjoy browsing through the shops, even if you don’t purchase anything.

I have long lamented the quality of quick service food at Disney’s Hollywood Studios.  With the opening of Toy Story Land and Woody’s Lunch Box I saw a light at the end of the tunnel with some more creative and higher quality food.  Star Wars Galaxy’s Edge has a quick service eatery, Docking Bay 7, and I’m happy to report that this new addition continues that theme.  Read past the names of the dishes to the descriptions and you’ll see they have put together some great combinations of flavors that change it up from the usual quick service fare. I really enjoyed my Endroian Yip Tip (fried chicken).  And, they serve a great breakfast menu too if you arrive super early for a boarding group to Rise of the Resistance.  I would say it is worth a visit if you are hungry and looking for quick service in Hollywood Studios.

Whether you know Darth Vader from Kylo Ren or R2D2 from BB8, you must appreciate the ride technology on the attractions in Star Wars Galaxy’s Edge.  On Millennium Falcon Smuggler’s Run your actions as the pilot, gunner, or engineer affect the outcome of the ride which is pretty cool.  But the piece de resistance (no pun intended) is the Rise of the Resistance attraction.  Rise of the Resistance is a massive theme park attraction with layers of experiences within the ride.  It is immersive, interactive, and completely amazing.  While you may not appreciate the Star Wars theme of it fully as a non-fan, you can definitely appreciate the overall experience of the attraction.  It is groundbreaking among theme park rides.

Are you a non-Star Wars fan like me?  What elements of Star Wars Galaxy’s Edge make it enjoyable for you?