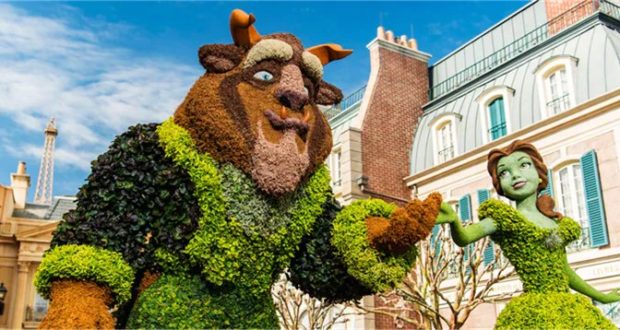 Spring is always one of the best times of year to visit Walt Disney World. The cold (by Florida standards) days are behind us. There are flowers and signs of new life everywhere! The days are longer, but the summer crowds have not yet arrived. Here are the top ten reasons why you need to drop everything and head immediately to Walt Disney World without giving it a second thought.

10) Quarantine Orders Have Been Lifted in Several States

Before you make your plans, check to see what the quarantine orders are for the state that you live in. That said, many states are lifting the mandatory quarantine requirements when traveling. While you still need to be careful (and probably should have a COVID-19 test when you return home) right now it is easier to travel than it has been in the past 12 months.

Speaking of the journey, the airlines are trying hard to recoup some of their losses from 2020. That means that they are offering deals! Airlines are trying to regain your trust, and that means you might be able to find a fantastic last minute deal. It’s been proven that it’s safe to travel by plane as long as everyone follows the rules, so don’t discount flying right now. Instead, take advantage of the low prices.

The summer weather is brutal in Florida. The temperature is hot, and the humidity makes it even hotter. During the summer there are strong storms on most afternoons. They only last a little while, but why take that chance? The Rainy Season hasn’t arrived quite yet, but it will be here soon. You should probably head to Walt Disney World now to avoid it. That said, you should still pack a poncho, just in case.

Early October is usually a good time to visit, but this year is going to be different. On October 1, Walt Disney World will celebrate its Golden Anniversary! That is also the day that Remy’s Ratatouille Adventure will open at EPCOT. The theme parks are going to be packed, even if capacity is raised. The party will be called the World’s Most Magical Celebration, and it is expected to last about 18 months. That means that if you want to experience pre-Anniversary and non-summer crowds, right now is the best time to do it.

Disney MagicMobile is a brand new way to experience Walt Disney World, and it’s as close as your smart phone or watch. Free MagicBands for resort stays are a thing of the past, but you don’t need one with Disney MagicMobile! It’s currently available only for Apple devices, but the rollout should continue soon. If you love the latest technology you know that you want to try this out in person. If you love MagicBands, don’t worry. They aren’t going away. You might want to visit right now so that you can pick up a few new ones.

Walt Disney World had some delicious treats planned for Earth Day last year, but then everything shut down. Earth Day is April 22, but in 2021 the celebration runs for more than just one day. You can order such delectable items as Sea Turtle Cupcake and Lion’s Fury. Many of the goodies are sold at Disney’s Animal Kingdom, but you’ll find Earth Month treats at EPCOT as well as some resorts. The Earth Day Bee Hive Cake should be enough of a reason to head to Walt Disney World immediately, it’s sold only April 6-22.

You know that we love the Character Cavalcades at the four Walt Disney World theme parks. What we might love just as much are the “random” characters that have been popping up lately. You might see Chip ‘n’ Dale having a picnic at Disney’s Hollywood Studios, or you could catch Mary Poppins in the United Kingdom at EPCOT. There have even been some extra sightings at the resorts! Seeing an extra character reminds us of how things used to be, back when characters roamed the theme parks more freely. There is something exciting about suddenly noticing a character that wasn’t there just a minute earlier.

No one will argue that 2020 was a difficult year, and that 2021 has already had its own challenges. Everyone has been under more stress than we thought possible. You need a break, and what better place to escape the “real” world than Walt Disney World?

Disney’s Blizzard Beach Water Park did not reopen when the theme parks did. In fact, it has only been open again for a few weeks. Even if you have been back to Walt Disney World since July you probably have not yet braved Summit Plummet again. Capacity at Blizzard Beach is limited, but crowds so far have been fairly low. Once the hot weather hits, that will no longer be the case. The temperature right now is perfect for Blizzard Beach, so you need to stop putting it off.

While the EPCOT International Flower & Garden Festival is modified this year, it is still so much fun! There are plenty of topiaries, gardens, and the Butterfly House. The Outdoor Kitchens sell so many delicious items that you won’t know where to start! The Orange Bird and Spike the Bee are both well represented. There are no Garden Rocks concerts this year, but local artists are featured for your entertainment. The Taste of EPCOT International Flower & Garden Festival is as beautiful as ever. You don’t want to miss it, so make your plans now. You have a little bit of time for this one, but July 5 will be here before you know it.