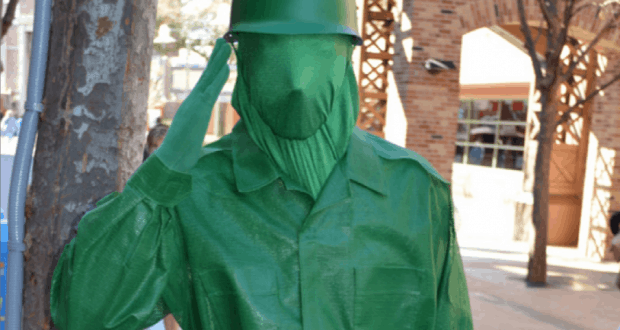 While Hollywood Studios is not often known for its dining options, compared to other theme parks like its neighbor, Epcot, there are actually quite a bit of snacks that are worth stopping for here. One of my favorite snacks, the carrot cake cookie, can be found at Writers Stop, near the Streets of America. Other favorites can be found at Min and Bill’s Dockside Diner, which is home to the pretzel hot dog, and other unique items that vary by season.

One Man’s Dream is an exhibit that chronicles the life of Walt Disney. Though this is one of my favorite attractions at Hollywood Studios, I sometimes have a difficult time persuading others to stop inside to see it. I believe they are missing out. If you are at all interested in Disney history, you will love the exhibits, which include artifacts from Walt’s personal life as well as from the development of his movies and theme parks, and the attraction’s concluding movie, which serves as a biography of his life.

While the stars of Toy Story, such as Woody, Jessie, and Buzz, can often be found frequenting either the Magic Kingdom or Hollywood Studios, characters such as the Green Army Men are more difficult to come by. Fans of the film trilogy can find these characters spontaneously greeting with guests outside of Toy Story Midway Mania. In addition to the added character variety here, the Green Army Men have a bit more freedom to interact with guests than characters who are limited to specific meet and greet areas.

The building that is home to the Great Movie Ride is a replica of Grauman’s Chinese Theater. While most guests pick up on this detail during their visit to the Great Movie Ride, few guests spend the time taking in all of the small details that make the building truly memorable. The handprints outside the entrance to the building are original to Hollywood Studios, and the details on the building’s interior are as close to the actual Chinese Theater as you would ever get without visiting there yourself. The building’s interior also includes exhibits that are updated frequently, which are often overlooked in favor of rushing towards the ride. So next time you visit the Great Movie Ride, take your time and notice all of the small details that went into creating this building.

The Jedi Training Academy, located near the Star Tours attraction, gives young guests between the ages of 4 and 12 the opportunity to train to become a Jedi knight. This 20 minute “class” is highly entertaining for guests of all ages, and something guests tend to overlook if they do not know any of the kids participating in it. Having never personally known anyone in the training academy, this is still one of my favorite things to watch at Hollywood Studios. Watching young Star Wars fans use their newly acquired skills against the dark side is very entertaining, even for audience members who do not have a child in the academy.

The Citizens of Hollywood are improve comedy troupes that frequent Hollywood Boulevard entertaining guests of all ages. These actors and actresses playfully perform as citizens of the Hollywood that “never was an always will be.” While often overlooked in favor of heading towards a favorite attraction, the Citizens of Hollywood themselves are actually one of my favorite “attractions” in Hollywood Studios. Their skits are hilarious, and interactive, and a great way to break up the day between rushing to rides and shows. If you’re in the area when they come out for a performance be sure to stick around and watch—you won’t be disappointed.