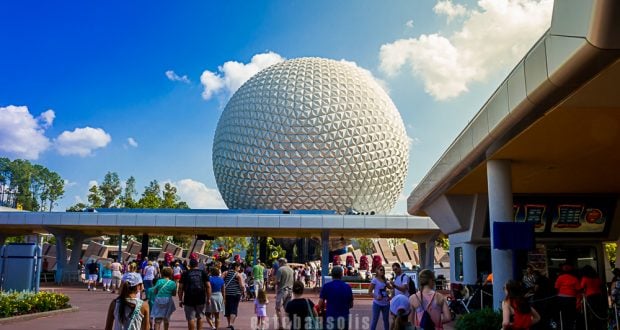 Top 12 Things You Absolutely Cannot Take Into A Disney Park

Packing for a fun day in a Disney theme park can be tricky. Whether you’re visiting Walt Disney World, Disneyland Resort, or a Disney Park in another part of the world, there are some items that you are not allowed to carry in with you. Here are the top 12 items that you need to leave behind.

Tripods are allowed at the Disney Parks, but there is a restriction on the size. Tripods must be small enough to fit inside a backpack. You can use a monopod as well, but not a selfie stick (more on that below). This makes sense, because a large tripod will block the parade or show view of the guests behind you. It will also take up a lot of space.

Disney offers plenty of places to sit down for a little while, so you do not need to bring in folding chairs with you. When you think about it, they are doing you a favor with this rule. Do you really want to carry folding chairs with you all day? Many are bulky, and there is no place to leave them when on a ride. If you really need the ability to sit down at a moment’s notice, you might want to consider renting a scooter.

Speaking of scooters, don’t think of adding a trailer if you use one. The same is true for strollers and wheelchairs. You are not allowed to bring in an item that will be pulled or pushed by any of these vehicles.

There are strict regulations on what types of wheeled items are allowed in Disney Parks. Electronic Conveyance Vehicles, commonly called scooters, are allowed, but the type of scooters that kids ride are not. A good rule of thumb is that if the wheels are for fun, they are not allowed. If your kid has Heelys, you might want to take the wheels out. Otherwise, instruct your child to not use the wheels. You don’t want your child to be embarrassed by being reprimanded. Better yet, leave the Heelys at home. It’s a safety issue.

While wagons are items that are not necessarily considered fun, especially in a theme park setting, they are still not allowed. Once again, it is for your safety, the safety of your family, and also for the safety of other guests.

Remote controlled toys can be a nuisance to other guests. They can also pose a safety hazard. Drones also should be left at home. If you purchase a remote controlled item while on vacation, leave it in the package until you are out of the parks.

You are allowed to bring suitcases and coolers into the Disney Parks with you, even if they have wheels. However, there is a size regulation. They cannot be larger than 24 inches long, 15 inches wide, and 18 inches high. You cannot bring in backpacks that are larger than that either. If you have a large cooler that you need for medical reasons, stop by Guest Relations as soon as you arrive.

If you’re spending Little Joey’s birthday at the Magic Kingdom and you brought gifts to give him at the Crystal Palace, make sure that they aren’t wrapped. This is a sign of the times. If you bring in wrapped gifts, they will be unwrapped by a Security Cast Member before you enter the park, or they will be taken away from you. Save time and embarrassment, don’t attempt to bring wrapped gifts into a park with you.

It doesn’t matter if you are of age, you are not allowed to bring your own alcohol into a Disney Park with you. If you purchased the bottle in a park, for example if you bought it during the Food & Wine Festival at Epcot, make arrangements to have it delivered to your room. If you’re not staying on property, leave the bottle in your car. If you attempt to bring alcohol into a park it will be confiscated, even if you bought it at Disney.

Service animals are allowed in the Disney Parks, but they are not allowed on all rides. No other pets are permitted. Pets are also not allowed at the Disney Resort hotels. If you’re at Walt Disney World and aren’t sure what to do with Buddy, take him to Best Friends Pet Care. Day and overnight boarding are available, and Buddy will have a vacation of his own.

A newer item to make the prohibited list is the selfie stick. These were originally allowed in the parks, but they quickly became a safety hazard. Guests would pull them out on rides, extending the reach. Not only was that annoying to the people behind them, but rides were not made to compensate for the additional range. More than one ride had to be shut down because a guest used a selfie stick. If you have one in your bag don’t worry, you can check it when you arrive at the park.

No type of weapons are allowed in any of the Disney Parks, even if you have a Concealed Weapons Permit. This also includes anything that looks like a gun, such as toy guns and squirt guns. Disney has removed any gun-type toy from the stores, although toy swords are still sold. If you realize that you have something that could be considered a weapon, talk to a Security Cast Member immediately. Trying to sneak in a weapon will get you banned for life, and could lead to legal action, depending on the circumstances.