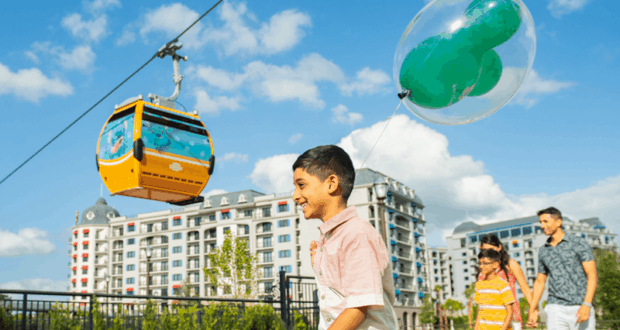 Summer is always a great time to visit Walt Disney World in Florida. The kids are out of school, and you have vacation days that you need to use before you lose them! If you’re looking for an incentive for why you should drop everything, pack a bag, and head to Walt Disney World right now, here are ten of them.

Everyone knows that summer in Florida is hot. Locals will often refer to it as “hotter than the surface of the sun”. That is why Walt Disney World is such a great summer destination. There are fantastic places where you can cool off! Disney’s Blizzard Beach Water Park is open and keeping guests cool. The pools at the Walt Disney World resorts are another place to cool off. If you’re at one of the theme parks, grab some Dole Whip or a Mickey Ice Cream Bar. You have to admit, you’ll have more fun trying to stay cool at Walt Disney World than you would playing in a kiddie pool at home.

It’s been well over a year since many people have traveled. After the past 15 months, you need a magical vacation. What better place to travel to than the most magical place on Earth? If the past year has taught us anything, it’s that making memories with our loved ones is important. Make those memories at Walt Disney World.

Rental car companies struggled during the pandemic because so few people needed them. Because of this, there is a rental car shortage, and prices are high. It’s a good thing that you don’t need to rent a car at Walt Disney World! If you fly into Orlando International Airport, Disney’s Magical Express will pick you up and take you to your resort! From there, just use Disney transportation. Once your vacation is over, Disney’s “Tragical” Express will take you back to the airport. You won’t have the added expense of renting a car.

You might want to rent a car for one day of your vacation, or maybe use your favorite ride sharing service. That’s because there is a brand new roller coaster that opens at Universal Orlando Resort’s Islands of Adventure on June 10. VelociCoaster has been described by some coaster enthusiasts as “the best roller coaster in Florida”. Although Walt Disney World owns our hearts, we do sometimes leave the Disney bubble. VelociCoaster is worth venturing out for.

We have missed fireworks at Walt Disney World, and we can’t wait for them to come back. While Walt Disney World has yet to make an official announcement, it could be soon! Harmonious seems to be in the testing phase, including with the music! While the show is not yet being presented to guests, you can see fireworks from EPCOT in various places on Walt Disney World property. It’s always been fun to just stop where you are and watch the sky light up in the distance. We might be able to do that again very soon.

If you visited Walt Disney World in the summer of 2020, there are masks in all of your pictures. Why don’t you return this summer and recreate all of those pictures without the masks? It’s nice to be able to show off your smile again, so take the pictures that you wish you could have taken last summer.

A guest favorite at Disney’s Animal Kingdom will reopen on June 20. Tusker House Restaurant will serve breakfast, lunch, and dinner. The food will be served family style, the buffet is not running for now. The best part of all is that Donald will be there! He and his friends will be all dressed up for safari.  Like the other character meals, the interaction has been modified. You won’t be able to get too close, but you’ll have a chance to see them from a safe distance. The food is still based on African cuisine with some American favorites as well. We might be most excited about the return of Simba Waffles.

3) A Celebration of Festival of the Lion King

Did you read that? For the Food & Wine Festival, Disney is dropping the “taste of” in the description! We’re honestly not sure if there is any significance to that or not, but it feels a little more normal. There is something unique about this year’s Food & Wine Festival. It is going to begin on July 15! In the past it’s been a fall festival, summers have been festival-less. This year, it’s going to be a long one, since the final day is November 20. That might sound like you have plenty of time, but here’s a suggestion. If you time your vacation well (and have plenty of vacation days) you could hit both the Flower & Garden Festival and the Food & Wine Festival in the same trip. That has never been possible before; unless you could take three months off. This could be the only time that the two festivals are so close.