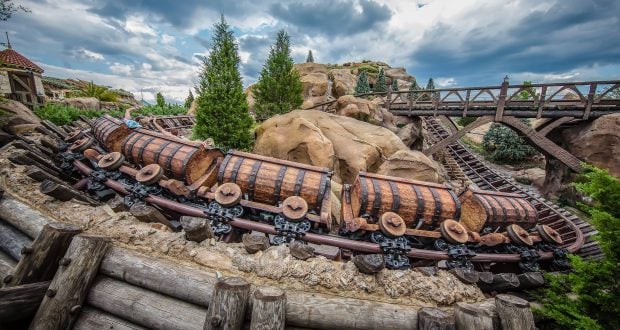 10. The Innovative Swing of Things

When you ride Seven Dwarfs, you’re taking part in a very special experience.  The ride employs an exclusive new system of a “tilting vehicle”, emulating the swaying you’d feel in an actual mine cart.  Disney Imagineers developed and patented this system, designed to enable guests to feel the mine cars tilting and swinging independently.

While there is sadly no Seven Dwarfs Mine Train store, this ride does offer something offered by no other ride on property (with the exception of Twilight Zone Tower of Terror): video footage of your entire experience.  Photos and video are captured by two on-ride cameras, and can be purchased, viewed and downloaded through Disney’s Photopass.

8. A Ride for Everyone

Because Seven Dwarfs Mine Train doesn’t involve any steep drops, loop-the-loops, or rolls, this ride is a great option for the whole family.  It’s fast enough to be exciting, and the side-to-side swaying of the train cars makes it a unique experience.  But it’s also appropriate for children and for some more sensitive adult riders.  Plus, the indoor section, where guests get a peek at the elaborate mine the Seven Dwarfs work in, is entertaining enough to warrant repeat rides!  Tip: more adventurous guests may want to try to the ride at night, when it feels faster and more thrilling.

Like any Disney ride, part of the magic is in the wait.  At Seven Dwarfs, queue adventures include sorting touch-screen jewels that float by, and “playing” musical water spigots by cleaning them.  You can even spin gem-filled barrels to turn the ceiling above you into a reflection of the Dwarfs and Snow White.  Pay attention to Doc’s tips along the way to maximize your queue experience.

Once you’ve had your fill of sorting gems, spinning barrels and playing spigots, you can turn your attention to spotting Hidden Mickeys.  Keep your eyes peeled for three gems forming a Mickey (in the mine, above Grumpy’s head).  You can also find Oswald the Lucky Rabbit, Walt Disney’s precursor to Mickey Mouse (carved into a ceiling beam, as you go up the hill in the mine).

5. Bringing Snow White and the Seven Dwarfs into the 21st Century

Though the ride is based on Disney’s very first animated feature film, the technology used in Seven Dwarfs Mine Train is anything but archaic.  In fact, the Dwarfs in the ride embody the most impressive audio-animatronics ever created by Disney.  The Dwarfs’ faces have been designed to look like actual faces, as if the characters from the movie have been brought to life.  The detail and range of expression in these lifelike faces has to be seen to be believed!

Fans of Snow White and the Seven Dwarfs will definitely appreciate the ride’s nods to the movie that inspired it.  The ride contains many details from the original film.  For example, the key that Dopey hangs by the mine door in the movie appears in a recreated scene in the queue of the ride.  And take a look at the mine carts themselves; no two are alike, and each was decorated individually to look used and worn, from the bolts to the paint, to resemble actual old mine carts.

Various songs from the movie can be heard throughout the ride queue and the attraction itself, the most notable of which is, of course, “Heigh-Ho”.  What guests may not realize is that one of the songs heard in the queue and in the vicinity of the ride, “Music in Your Soup”, was actually deleted from the film itself.  Disney Imagineers decided to add it back into the ride as a nod to the film.

Fun fact: guests riding Seven Dwarfs Mine Train got even more excitement than they bargained for the night of November 1st, 2014, when a fire, sparked by firework embers, started on some artificial grass at the top of the ride.  Thankfully, there were no injuries; the fire was put out in minutes, the ride reopened later the same night, and heigh-ho, the Dwarfs were back to work!

A much older attraction (“Snow White’s Scary Adventures”) based on the same movie was one of the original rides at Walt Disney World, located on the site of the current Princess Fairytale Hall in Fantasyland.  This ride closed in 2012, but guests with eagle eyes will notice that the vultures featured in Snow White’s Scary Adventures appear on a mining structure in Seven Dwarfs Mine Train; many of the figures in the final yodel scene of the current ride are also recycled from this former attraction.