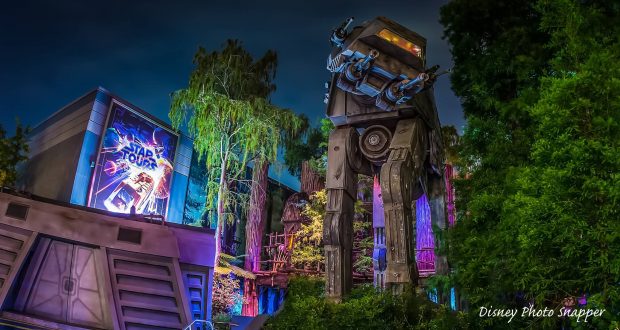 Since Lucasfilm was bought by Disney, Star Wars has become hotter than ever. It will continue to grow, since there are several more movies on the way. The excitement is obvious at Walt Disney World. There is a Star Wars themed land in the works for Disney’s Hollywood Studios. The opening date (or year) is not yet known, but you don’t have to wait if you want to travel to a galaxy far, far away. Star Tours – The Adventures Continue is a motion simulator ride that allows you to visit several different worlds. The original Star Tours closed in 2010, and the replacement is a 3D thrill. As a Star Wars fan, it’s personally my favorite ride at Walt Disney World. I’ve ridden it well over 200 times. Here are ten facts and secrets that you might not know about Star Tours – The Adventures Continue.

The original idea for a motion simulator ride at Disneyland in California was supposed to be based on the movie The Black Hole. The idea proved to be too expensive, especially given the fact that the movie wasn’t an overwhelming hit. When Star Wars became a phenomenon, the motion simulator idea was brushed off. Disney approached Star Wars creator George Lucas, and Star Tours was born. The ride has proven to be so popular that a version was built at Walt Disney World, and also in both Paris and Tokyo.

Star Tours – The Adventures Continue was updated with a new scene and planet for the release of Star Wars: Episode VII The Force Awakens. It has been announced that the ride will be updated again near the release of Episode VIII in December, 2017. It’s safe to assume that there will be another change for Episode IX in 2019.

As already mentioned, the planet Jakku was added in December, 2015, to celebrate the opening of Star Wars: Episode VII The Force Awakens. That wasn’t the only change that was made, but some are more subtle. Little extras were added to existing scenes. Boba Fett might now make an appearance with Darth Vader, Jar Jar Binks has two different ways that he can get into trouble, and the Naboo scene has two different endings. These are just a few of the changes that casual Star Tours fans might never notice.

The first Star Tours flight took place back in 1986 at Disneyland. It was piloted by an inept pilot named RX-24, or Rex for short. Rex was voiced by Paul Reubens. The new adventure is piloted by C-3PO, who accidentally ends up at the controls. Rex may no longer be in the pilot’s seat, but he’s not gone. In the queue line there are several droids. One is marked “Defective! Return to factory!” That’s Rex. If you listen carefully you’ll hear bursts of sound from him.

If you like looking for Hidden Mickeys, watch the window where the shadows walk by. At one point an R2 unit stops and suddenly two circles appear, forming a well known shape. There are other hidden characters as well. Pay attention to G2-9T, the droid who scans the luggage. There are some fun surprises in some of those bags. The dialog is pretty funny as well.

There is a second droid who scans passengers instead of bags. That’s G2-4T. He also has some amusing lines, so listen to what he has to say. If the voice sounds familiar, that’s because you heard him over at Epcot. Patrick Warburton also brings to life Patrick, everyone’s favorite Chief Flight Attendant at Soarin’. He also played Puddy on Seinfeld, if you’re still trying to place him.

One aspect that makes Star Tours unique is that a guest from each ride is picked as the Rebel Spy. If you ask a Cast Member how the spy is chosen, most likely you’ll be told that it is random. It isn’t, a picture is taken of the entire car and the spy is chosen by a Cast Member from that picture. There is no sure formula for being picked as the Rebel Spy. Being nice will increase your chances, so chat it up with the Cast Member at the ride’s entrance. Don’t ask to be picked, because then you won’t be. Also, once seated don’t put on your flight (3D) glasses until instructed to do so. The Rebel Spy picture will not be of someone who is wearing the glasses.

There are plenty of Star Wars characters to be spotted during Star Tours. Depending on the scenario that you get, you could see Darth Vader, Boba Fett, Finn, BB-8, Jar Jar, Chewbacca, Sulbulba, Princess Leia, Yoda, Admiral Ackbar, and more. Not every character will be seen each ride, and some have been put on hold with the Jakku and BB-8 additions. Many of the original actors voiced their parts, including John Boyega, Anthony Daniels, Carrie Fisher, James Earl Jones, Tom Kane, and Frank Oz.

Disney’s Hollywood Studios has a few rides that are known for long Wait Times. Fortunately, Star Tours – The Adventures Continue is not one of them. Since six simulators run at once, the line moves quickly. It is fairly easy to get a FastPass+ for, because it is a Tier Two attraction. If you don’t have a FastPass+, try riding either first thing in the morning or later in the evening. The crowds are worst in the middle of the day, especially after Indiana Jones Epic Stunt Spectacular! and Jedi Training: Trials of the Temple get out.

If you show up and there’s no line, you might want to ride Star Tours over and over. After all, there are dozens of ride combinations, and you probably still haven’t been picked as the Rebel Spy. Go ahead and ride more than once, but don’t ask if you can just stay on for the next ride. The Cast Members will make you get out and get back in line again. Since it is a motion simulator ride, it does make some people sick. Disney wants to make sure that you aren’t dizzy or lightheaded before letting you ride again.