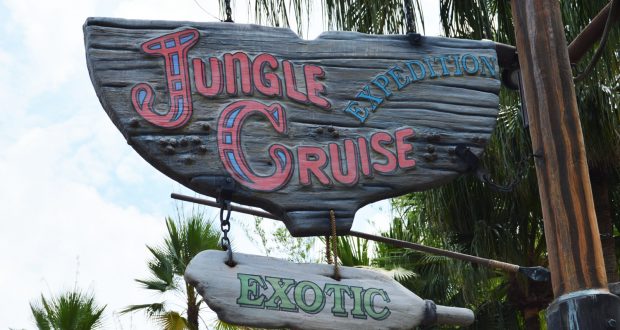 Disney’s Magic Kingdom is home to several different lands that are so perfectly themed that they whisk guests away to different places in time, location, and imagination. One of those lands is Adventureland, a whimsical and exotic take on some of the most adventurous and mysterious places in the world. One of the most popular attractions in Adventureland is the Jungle Cruise which brings guests on a trip down some of the largest rivers in the world. Many guests love the Jungle Cruise in part thanks to the hilarious skippers who narrate each experience. The skippers have their own sense of humor which is sure to leave guests both laughing and groaning along the way. In addition to the wonderful skippers, the Jungle Cruise is filled with amazing details that help to make the attraction so immersive. From homages to past Imagineers and other Disney locations to Hidden Minnies and disco dancing, the Jungle Cruise has it all. Here are the top ten mind blowing facts about the Magic Kingdom’s Jungle Cruise.

The queue portion of the Jungle Cruise is filled with many amazing details that help to build the story of the skippers and the company that they work for. Guests who pay attention to the details while waiting in line are sure to spot some hilarious jokes and puns including a sign found near the loading dock. The sign features the name E.L. O’Fevre which may seem innocent enough until you say it quickly!

Another hilarious sign found near the loading dock showcases the skipper’s humor and how they can make a joke out of anything. A dinner menu is posted right near the loading area and shows how the skippers eat some interesting items each night but try their best to make it all taste like chicken. Imagine their surprise when they actually do get to have chicken one night!

There are many different boats which operate at the Jungle Cruise and each one features a unique name. These alliterative names pay tribute to the jungle’s spirit while adding some humor in as well. Some boat names to look out for are Amazon Annie, Congo Connie, Mongala Millie, Nile Nellie, Senegal Sal, and Wamba Wanda.

While the Jungle Cruise may seem like an authentic adventure down the largest rivers of the world, it is actually fairly controlled in that the boats operate along a track which helps direct them. The water is fairly shallow, however it is dyed brown so that guests are not able to see both the bottom and the track below.

Near the entrance and exit of the Jungle Cruise are many crates which are stacked haphazardly and feature logos and hints at the exotic contents that might be found within. One crate features the name Evans, which may seem like a random name but actually pays tribute to an Imagineer. Bill Evans worked as a horticulturist and helped to design much of the lush and tropical plant life that can be found on the Jungle Cruise. Guests who look closely can spot a crate that pays tribute to him by reading “Evans Exotic Plant Exporters.”

In addition to honoring Bill Evans, this particular crate also pays tribute to the original Disney park. Underneath Evans’ name is the address 1313 Harbor Boulevard, Anaheim CA 71755. This is the actual address of Disneyland apart from the zip code which references the park’s opening day of July 17, 1955.

The Jungle Cruise takes guests down several different rivers and at one point they are ambushed by a trio of head hunters who appears in the bushes yielding spears. While the head hunters may seem vicious, one of them has dancing on the brain. If guests listen closely, they can hear the first two head hunters yell out various war noises before the third one declares “I love disco!”

Many Jungle Cruise skippers point out the back half of a plane as their crash landing at their current job. While the plane may look as though it genuinely crashed in that location, guests might be surprised to learn that the other half of it can be found elsewhere in Walt Disney World. The front half of the plane can be found in the Casablanca scene of the Great Movie Ride over in Disney’s Hollywood Studios.

One of the most thrilling portions of the Jungle Cruise comes when guests enter into a crumbling temple that is filled with roaring tigers, mischievous monkeys, and lots of treasure. Just before exiting the temple, guests should look to the left hand side of their boat to spot a column that seems to have a large chunk of stone missing from it. The missing chunk forms a Hidden Minnie whose head can be found in profile looking to the right.

One of the most amazing things about the Jungle Cruise is the fact that it changes into an entirely new experience each holiday season. The attraction becomes the Jingle Cruise where holiday charm and humor is instilled into the exotic jungles by decorations and the skippers. With plenty of good cheer and new jokes, guests should be sure to enjoy a ride on the Jingle Cruise if they can!