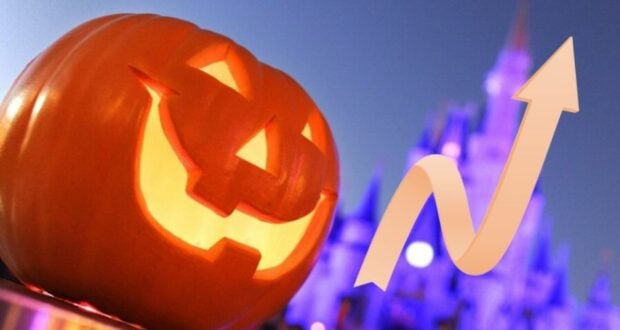 We may be rolling into summer mode with new tasty bites revealed for Walt Disney World Resort and the arrival of Guardians of the Galaxy: Cosmic Rewind at EPCOT, but let’s shift our focus to the most SPOOK-tacular time of the year… Halloween!

We were thrilled to learn Disney is returning the beloved Mickey’s Not-So-Scary Halloween Party to Magic Kingdom Park! The special after-hours event has always been a fan favorite as Disney Guests enjoy the iconic Park after hours with special treats and Halloween experiences along the way.

The last Mickey’s Not-So-Scary Halloween Party (MNSSHP) took place in 2019, as no party was held in 2020 due to COVID. In 2021, Disney introduced Disney After Hours Boo Bash which didn’t have the greatest reviews, leaving Disney fans begging for the return of MNSSHP. Disney listened as now in 2022, MNSSHP makes its grand return!

If you’re planning to purchase a ticket to the Halloween party, you’ll want to be aware that ticket prices have climbed for MNSSHP. In 2019, the special-ticketed event had tickets starting at $79. Just like this year, in 2019, Guests were welcome to enter the Park at 4 pm with the party officially beginning at 7 pm and ending at midnight.

Now, in 2022, Guests purchasing tickets for MNSSHP will spend between $109 and $199 per adult. BUT – wait, there is good news. When Disney After Hours Boo Bash tickets were released in 2021, Boo Bash tickets were between $129 and $199 per adult. So while, yes, ticket prices have climbed for MNSSHP, they are still cheaper or roughly the same price compared to last year’s Boo Bash event.

For 2022, Disney has promised its Disney World Halloween Party to be a frightfully fun experience! Select party nights are held between August 12 and Halloween night (October 31, 2022), with plenty of delicious Disney dining treats, costume fun, special Disney character meet and greets with characters in their Halloween finest, and even confirmed Halloween overlays on select attractions.

It will surely be a frightfully fun time that Disney Park Guests will need to decide if it’s worth the ticket price climb from 2019 Mickey’s Not-So-Scary Halloween Party to this year’s big event! Check out Mickey’s Not-So-Scary Halloween Party dates and purchase tickets here. Disney Vacation Club Member or Annual Passholder? Check for ticket discounts!