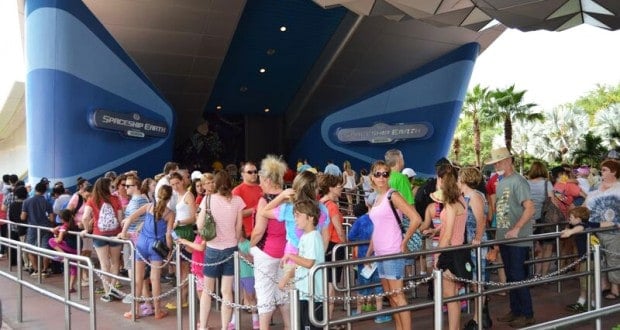 Walt Disney World is a magical place filled with princesses, flying elephants, and magic. It is also one of the top tourist destinations on the planet. On your trip you will undoubtedly come across people who aren’t getting lost in their surroundings. You will see other guests cut in line, you’ll get whacked by backpacks, you’ll be hit by strollers, and you’ll be surprised by how many bratty kids are there. Most of it you’ll be able to let roll off of your back, but every now and then there might be a guest who is out and out rude. How you handle the situation has the potential to ruin your vacation. Don’t let it. Here are some tips on what you should do when another park guest is overly rude.

Do you really want to let a stranger have power over your day? Shake off whatever happened and let it slide. Whatever you do, don’t retaliate. “He started it” will not be an acceptable excuse. The other person may be at fault, but if you don’t let it slide you’ll ultimately be responsible as well.

For many people it’s all too easy to let a few choice words slip out when upset about something. Remember, though, that Walt Disney World is a family destination, and that you will be surrounded by children. Do not be the person that other families complain about. They won’t know that someone was rude to you first, they’ll just know that they heard words coming out of your mouth that shouldn’t be used around little ones.

If things with the person who was rude are really bad, talk to a Walt Disney World security officer. There are some behaviors that will not be tolerated, and could lead to the offender being removed from the park. If something is really bad, security will want to know about it. If you can’t find a security officer, talk to another cast member. He or she will either be able to help or will notify security for you.

Take Care of Yourself

Sometimes our emotions get out of hand over small things because we are not taking proper care of ourselves. If you’re hungry, thirsty, or tired, a small thing might turn into a big thing. Make sure that you take care of yourself while you’re on vacation. Don’t push yourself too far without taking care of your basic needs. A pretzel and a cold drink might help you to realize that the offense wasn’t as bad as it originally seemed.

Too much alcohol can cause people to say and do things that they wouldn’t normally do. Take it easy when you’re on vacation, and don’t overdo it. A buzz can turn a small thing into a big deal in a hurry. Also, if the rude person is drunk, console yourself with the fact that he will probably pay for it in the morning.

Don’t let one bad incident ruin your entire vacation. Give yourself a few minutes to be upset and then move on. You’re spending time at the Happiest Place on Earth, so let yourself be enveloped once again by the magic. Get a picture with a princess, or take a ride on that flying elephant. Enjoy an ice cream cone, and have fun with your loved ones. You’ve worked, saved, and planned too hard to allow a rude guest to ruin your vacation.

If you’ve encountered one guest who was rude, imagine being a cast member and having to put up with rude guests all day long. It is the cast members who truly bring the magic to a Disney vacation, they should be treated with respect. Unfortunately, people take out their frustrations on the cast members. They are blamed for ticket prices, for long lines, and even for the rain. If someone has been rude to you, go out of your way to be nice to a cast member or two. Strike up a conversation about their jobs, their hometowns, or even the weather. Being nice to someone else will help to improve your own mood. A sincere thank you will make you feel a lot better, and will help to lessen the offense against you. Of course thanking cast members is something that you should constantly do, even if you haven’t encountered any rude guests.