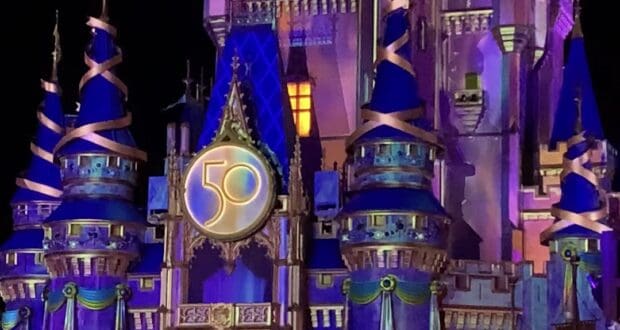 The second day of the media event to celebrate Walt Disney World’s Golden Anniversary started off with a bang. There were two major announcements. The first was that MagicBand+ is going to debut next year. It will take your Walt Disney World experience to a new level. The bands will be interactive, adding extra magic to your day. The second announcement was that Star Wars: Galactic Starcruiser will officially open on March 1, 2022. Reservations will open on October 28. It was also confirmed that Guardians of the Galaxy: Cosmic Rewind will open in 2022 as part of the World’s Most Magical Celebration. 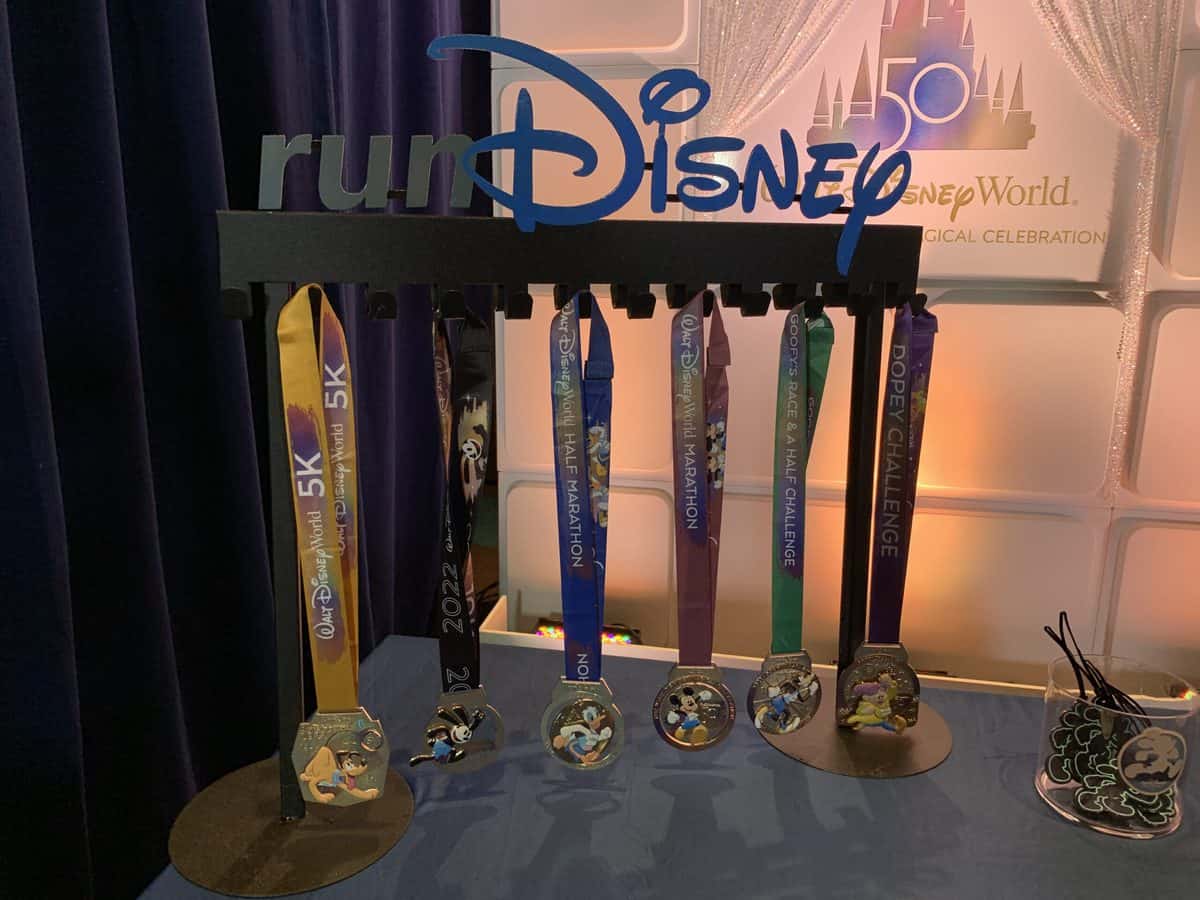 One of the things that I learned a bit about is runDisney. I had the opportunity to speak with representative Mark. He talked about the return of in-person races, and showed the medals for the upcoming Marathon Weekend. When asked about how to sign up for a race if there are no spots available, he had a great suggestion. He said check to see if there are any spots in the charities that are associated with the races. He said that there is often space available in the charities, and you can benefit a worthwhile cause. 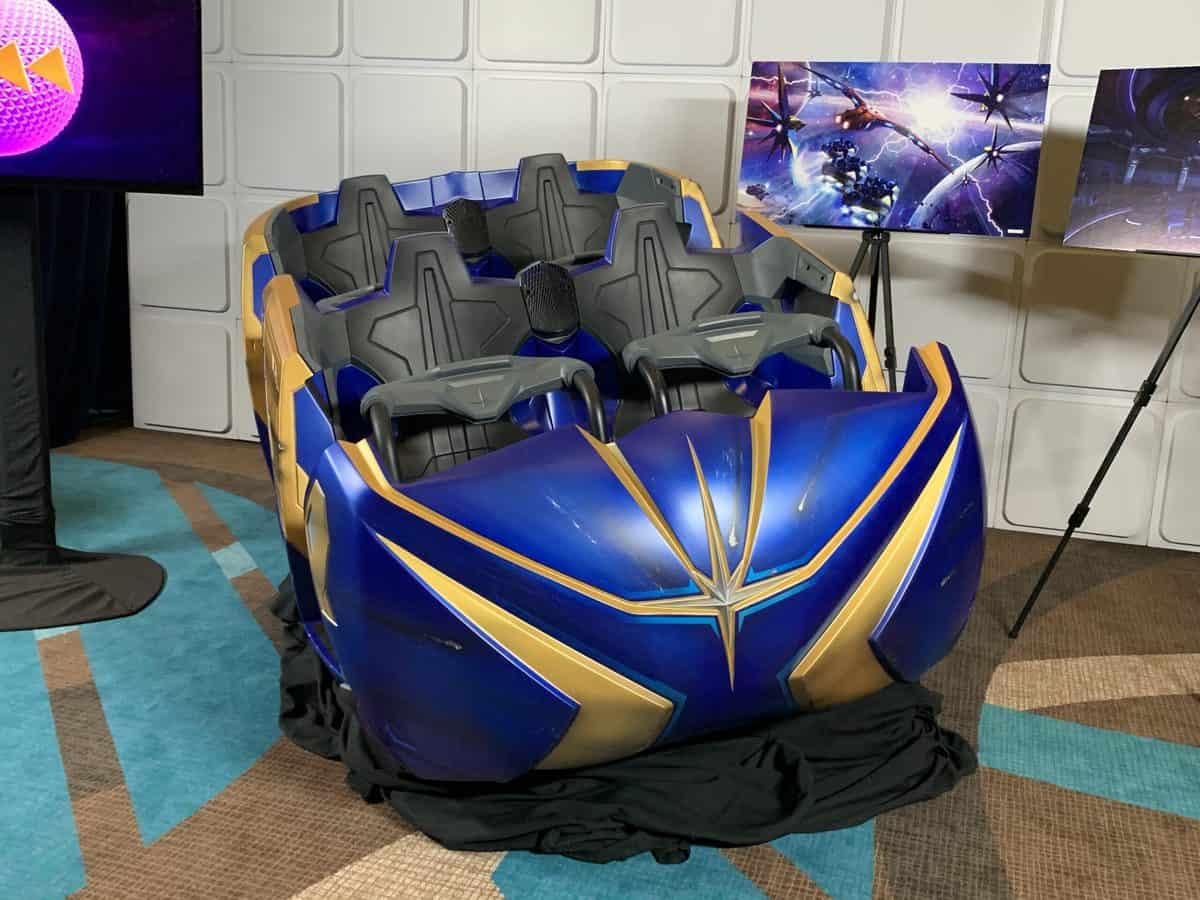 A highlight of the day was learning a bit more about Guardians of the Galaxy: Cosmic Rewind. A ride vehicle was on display. On the first day of the event I was able to see part of the track, and the second put everything together a bit more in my mind. Cosmic Rewind will be one of the largest enclosed roller coasters in the world. It will be family friendly. The thrill level will be slightly higher than Seven Dwarfs Mine Train but less than Rock ‘n’ Roller Coaster. The height requirement has not yet been determined. 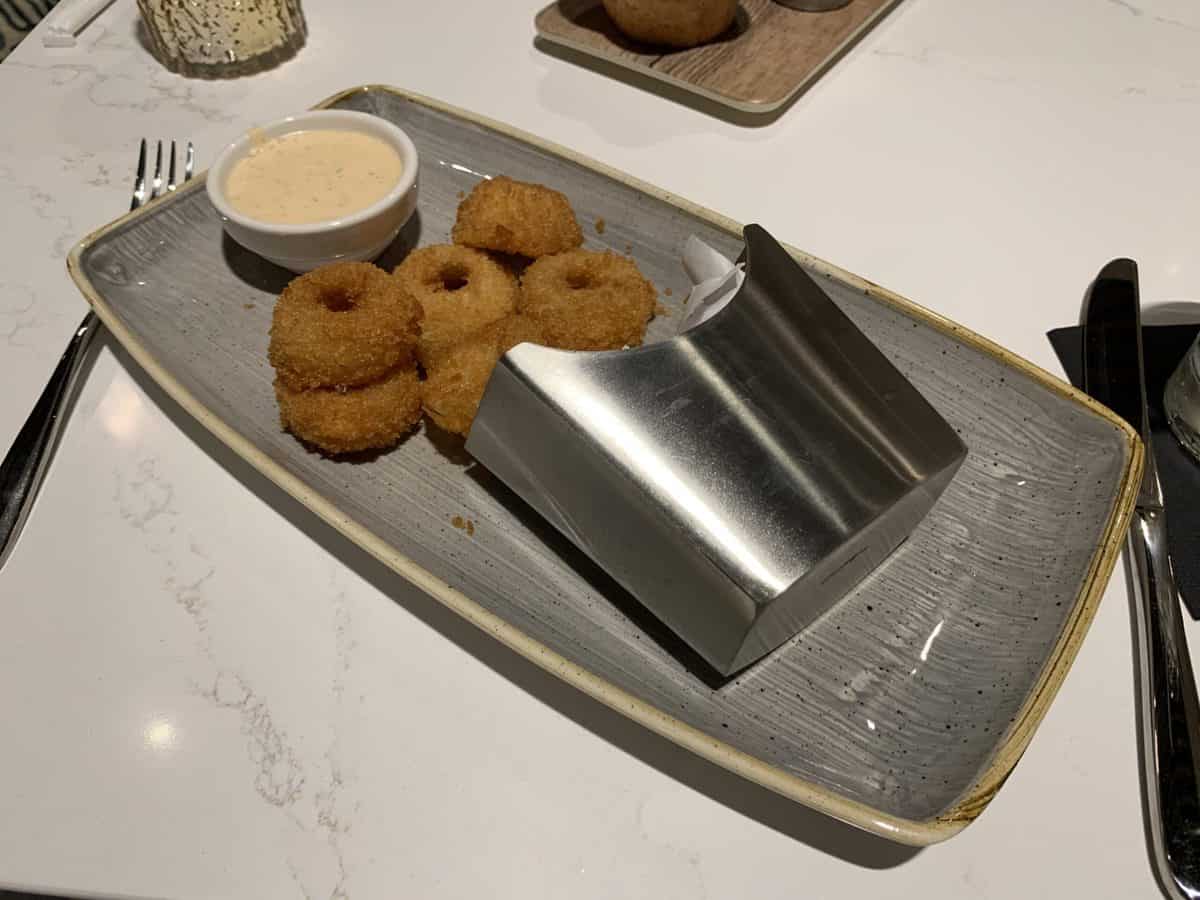 Lunch was at Steakhouse 71. It was a soft opening, and it wasn’t without hiccups. The food was phenomenal. I ordered the Steakhouse 71 Onion Rings for my appetizer, and they were probably the best onion rings that I’ve ever had. They came with ranch dressing on the side, which had a slight kick. The onion rings were fantastic without the dipping sauce, but the ranch brought them to a whole new level. I ordered Vegetable “Wellington” as my entree, and it was excellent. Linda, who was my incredible server, explained that the entree was something that one of the chefs came up with by just throwing things together. The end result was a hit with me. It’s one of the most unique plant-based options at Walt Disney World. It was flavorful and filling. I tried the Cold Brew & Tonic, and for me that one was a miss. The drink looked pretty, but the flavors of coffee, maple, vanilla, and tonic water just didn’t work for me. 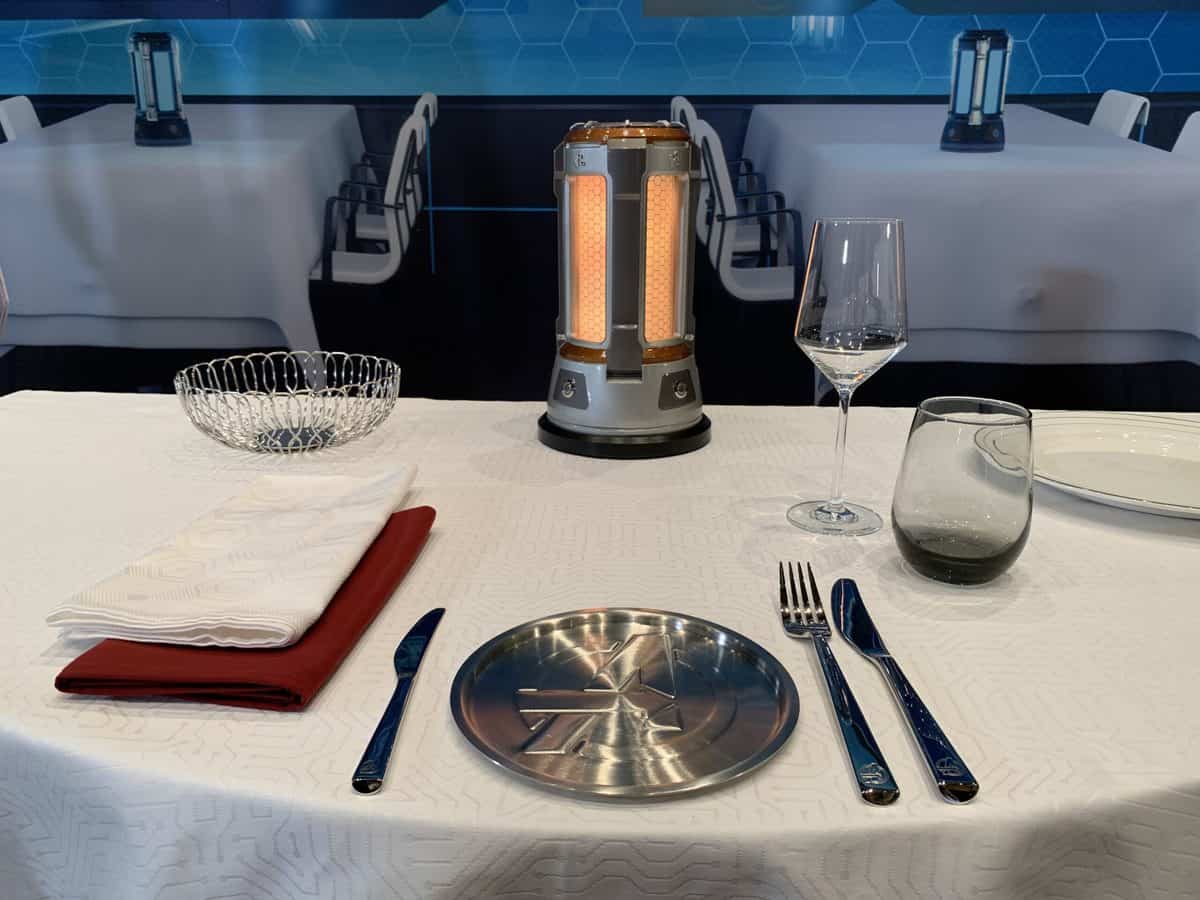 One treat was a sneak peek at the Disney Wish. There were models set up to represent the three main dining rooms. 1923 will be an elegant yet casual choice. It’s meant to take you back to the Golden Age of Hollywood. Worlds of Marvel will be full of surprises. Technology will be part of your meal, but be careful because Ultron wants to get his hands on that technology! The final rotational dining restaurant will be Arendelle: A Frozen Dining Adventure. This will be dinner theater in the round. The story will take place right after “Frozen II”, and will be a celebration of the engagement of Kristoff and Anna. There was also the first public showing of a model of the Disney Wish. The new ship is going to be amazing! 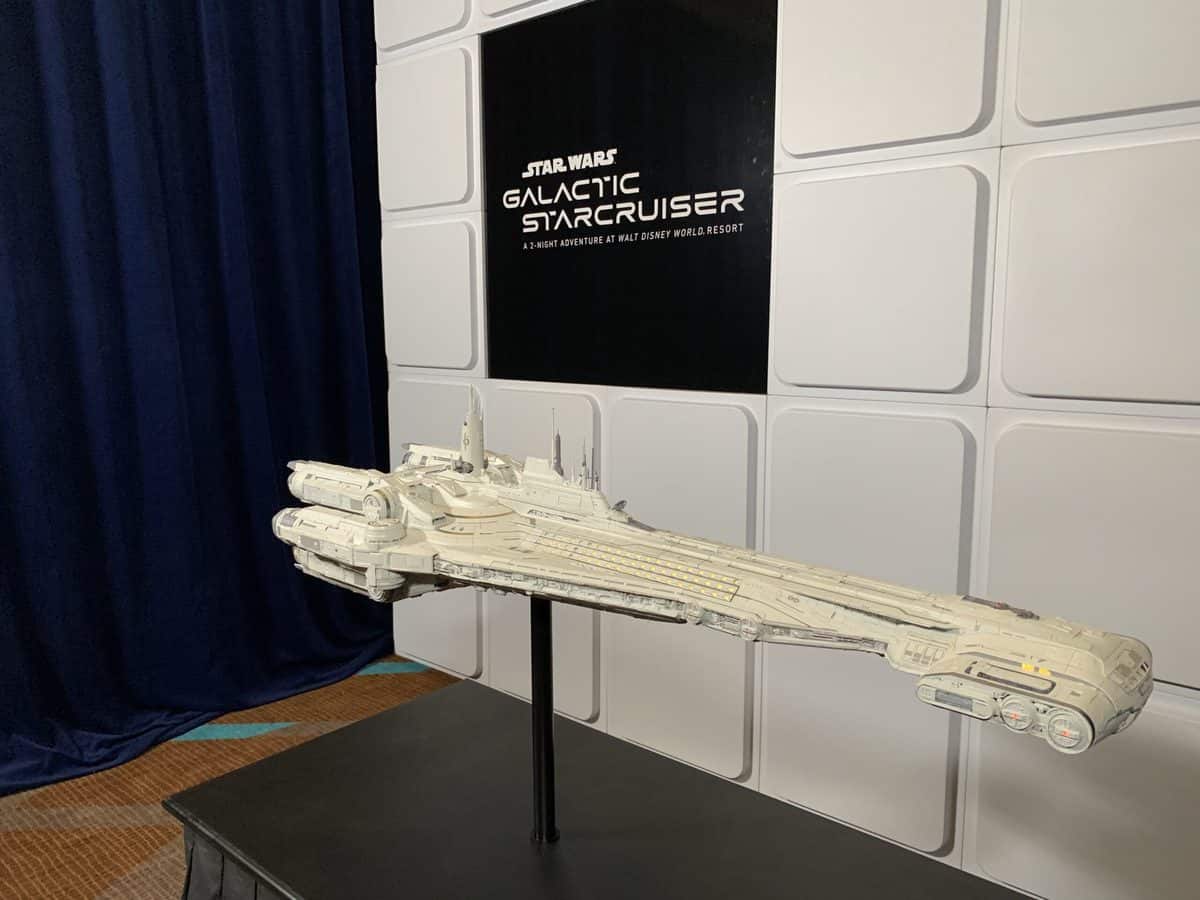 Another amazing new option will be Star Wars: Galactic Starcruiser. The model that used to be in Walt Disney Presents has been removed and was part of the event. The two night journey is going to be packed with adventure. You’ll see familiar and new faces, and you’ll truly feel as if you’re part of a galaxy far, far away. 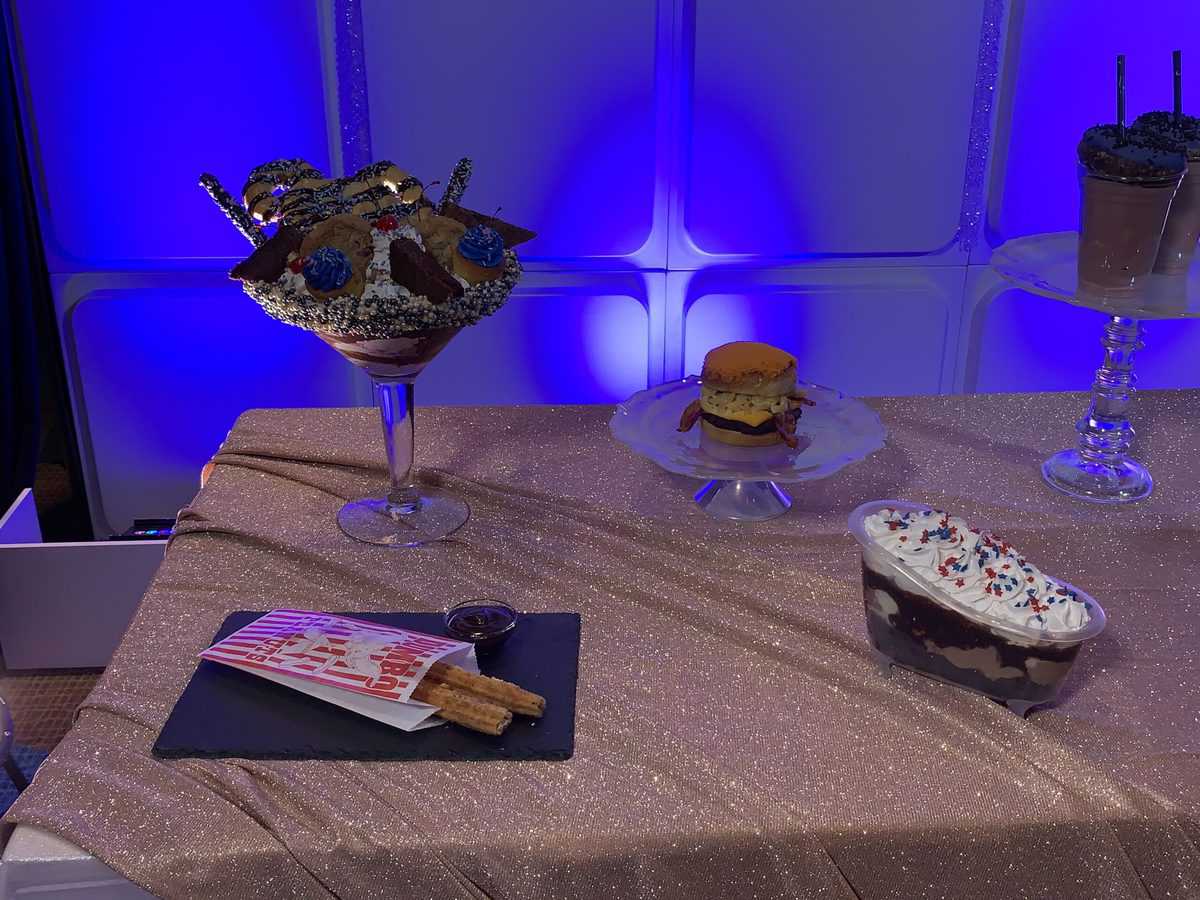 There was another opportunity to take a look at a few of the 50th Anniversary food items. The ones shown on the second day featured past and present attractions or activities. There are two beverages based on the Haunted Mansion. The Toad Burger is a throwback to Mr. Toad’s Wild Ride. My favorite for creativity was probably Uncle Orville Great Big Beautiful Tomorrow. It’s a patriotic sundae that’s served in a souvenir bathtub. The ultimate celebration dessert is Cheers to 50 Years. It features ice cream, cookies, pretzel rods, brownies, hot fudge, caramel, and an entire Mickey Pretzel. It’s big enough for several people to share. 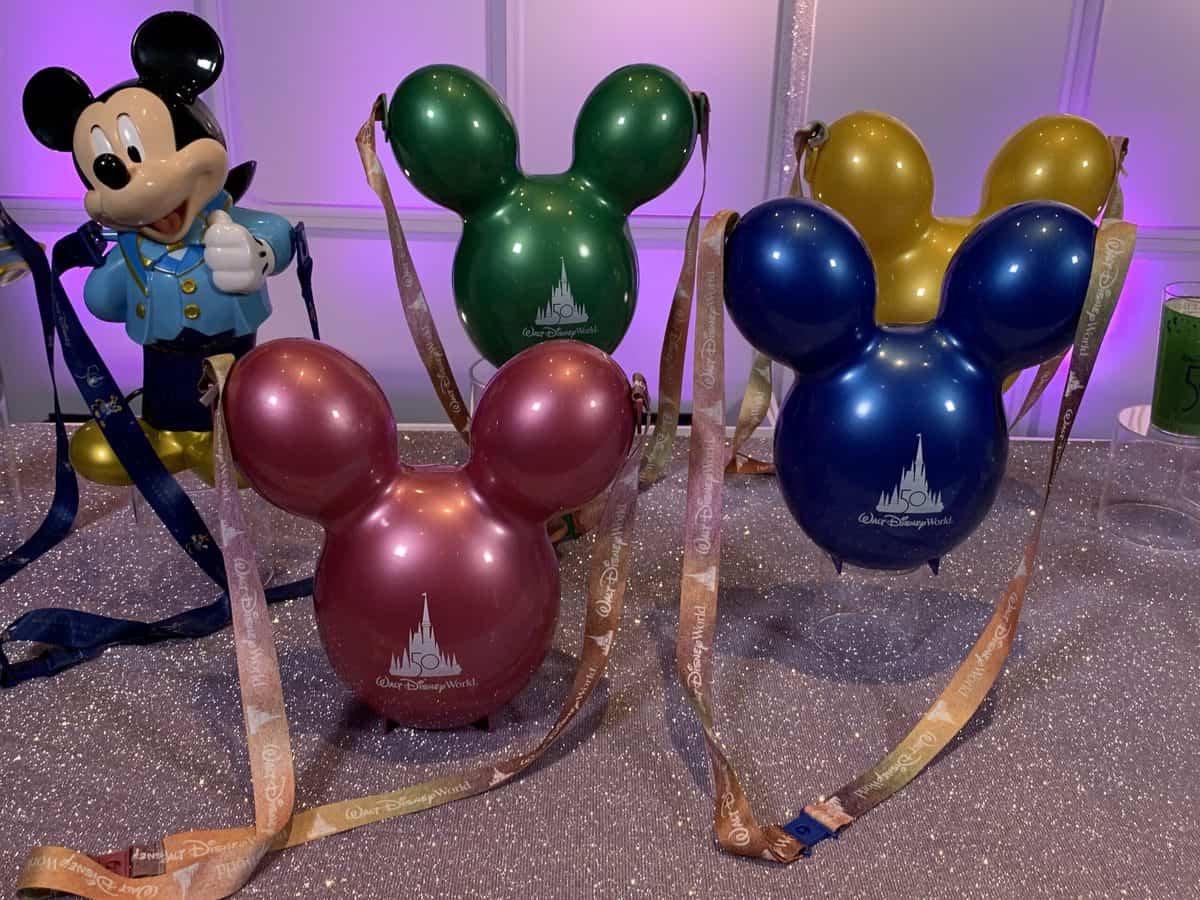 There will be new refillable resort mugs in honor of the 50th Anniversary. The water parks will have a new refillable mug as well. There’s a 50th Anniversary popcorn bucket that will be sold in all four parks, and a special bucket at Disney’s Animal Kingdom to celebrate Disney KiteTails. There is a Mickey popcorn bucket and a matching Minnie sipper. The Magic Kingdom will also have four balloon popcorn buckets in EARidescent colors. You’ll want to look for the EARidescent specialty drinks. Each one will come with a location specific character, and when you place that character in the drink it will change color! 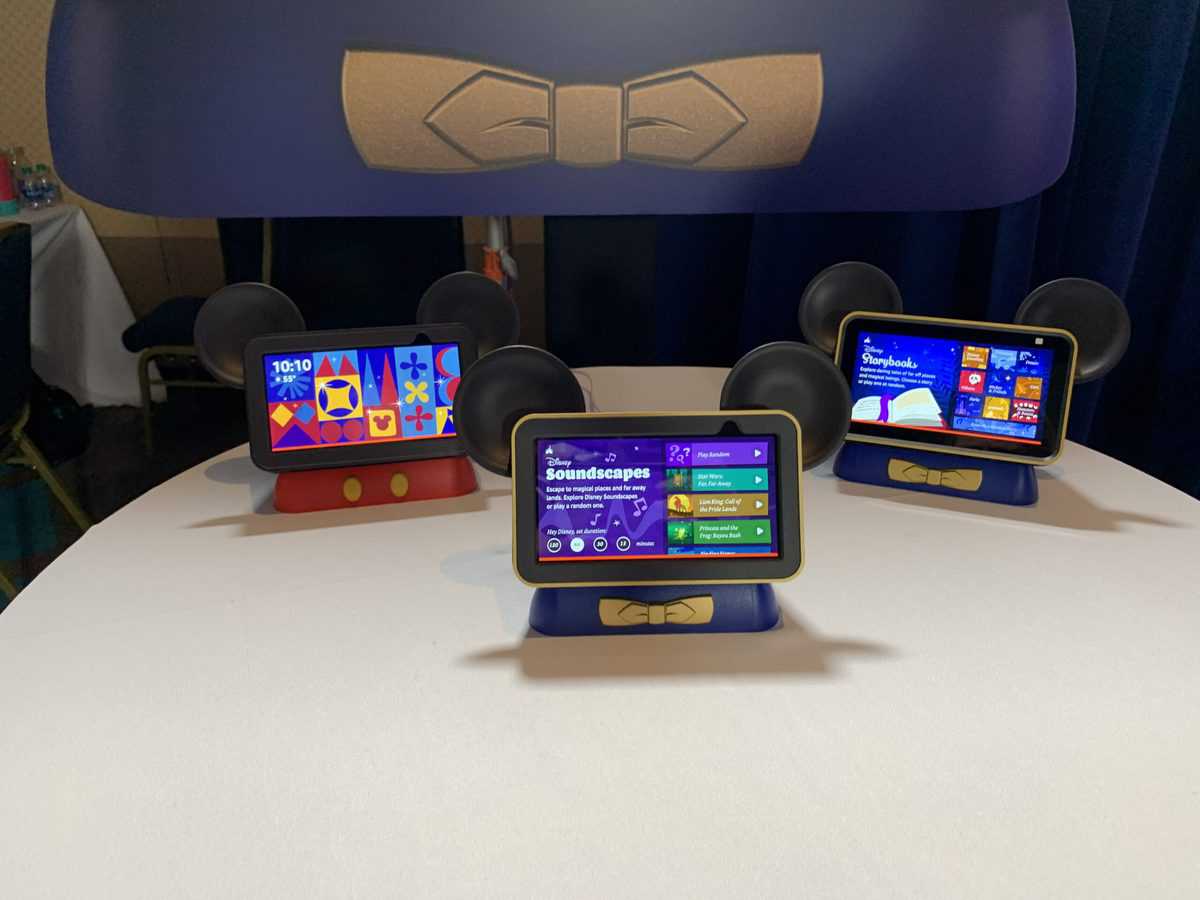 There was a demonstration of Hey Disney, which will roll out at the Walt Disney World Resorts next year. It is in partnership with Amazon, and it will be a great way to find out information or enjoy some extra magic during your stay. Disney takes your privacy seriously, so don’t think that they will be spying on you. You will have to turn the device on when you arrive in order to use it. 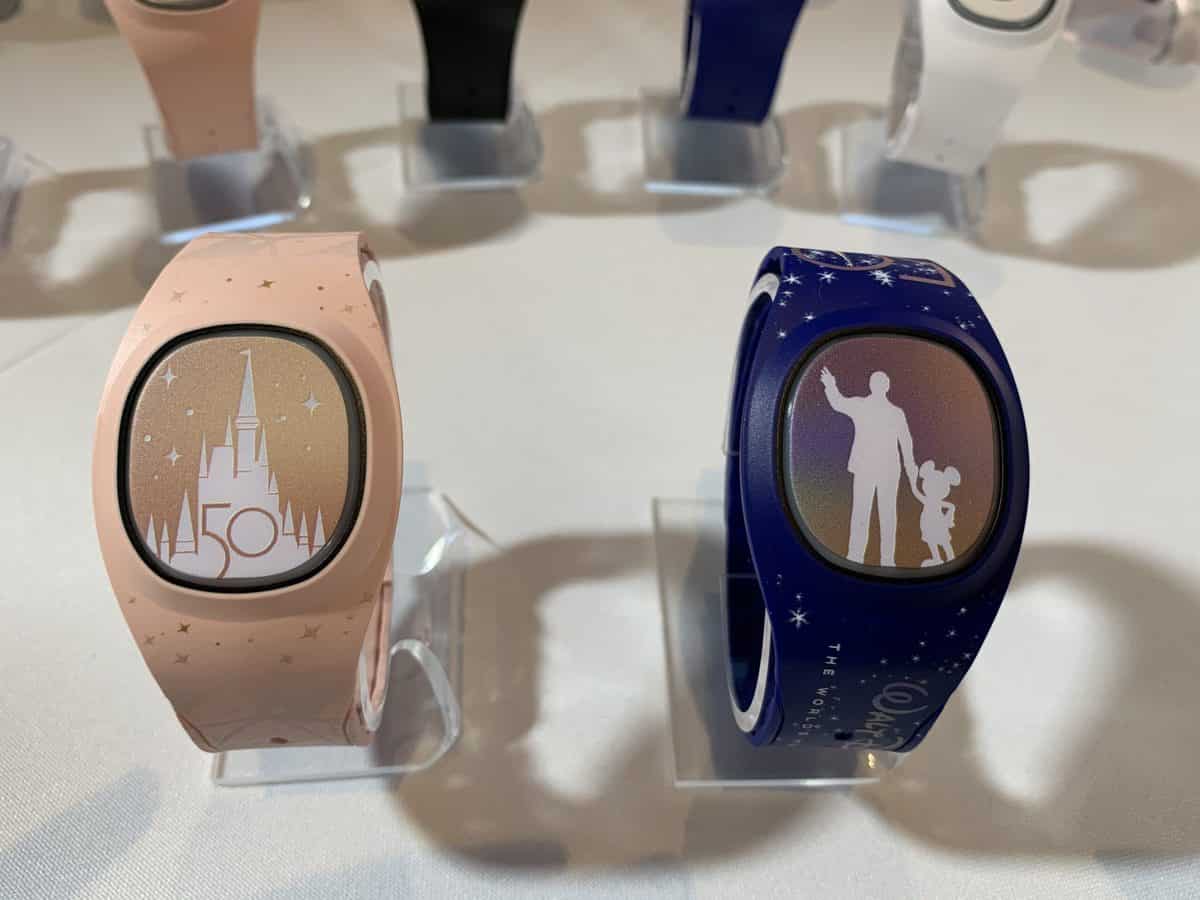 There were several designs of the new MagicBand+ on display. I have a feeling that these will be quite popular once they are available next year. The price has not yet been released. There was also information on Disney Genie, which will be included with the My Disney Experience App later this fall. There is much more to Disney Genie than people think! It’s a planning tool that will help you to make the most out of your day at Walt Disney World. Disney Genie+ will be an additional cost. That will include Lightning Lane access (one at a time) and some augmented photo opportunities. Three photos were demonstrated, but there will be about 20 when the program rolls out. Remember, Disney Genie will be free, while Disney Genie+ will be an additional fee each day. 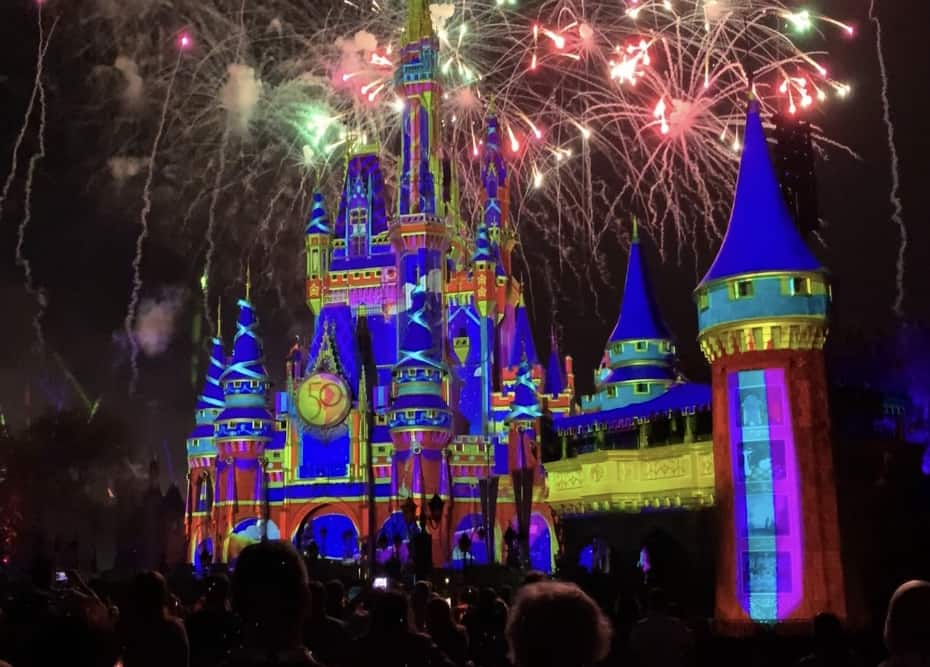 The two day media event ended with an advance showing of Disney Enchantment. The show is unique, because the projections aren’t just on Cinderella Castle. You will see them on the other buildings on Main Street, U.S.A. If you can’t wait to see the new show, it was livestreamed as part of the celebration. It is available to watch on YouTube. Before the show the Magic Kingdom was rededicated. Christina Aguilera performed “Reflections”, then both Bob Chapek and Bob Iger thanked Cast Members, Guests, and Walt and Roy Disney before rededicating the most popular Theme Park in the world. Mickey, Minnie, and the gang waved to everyone as they left. 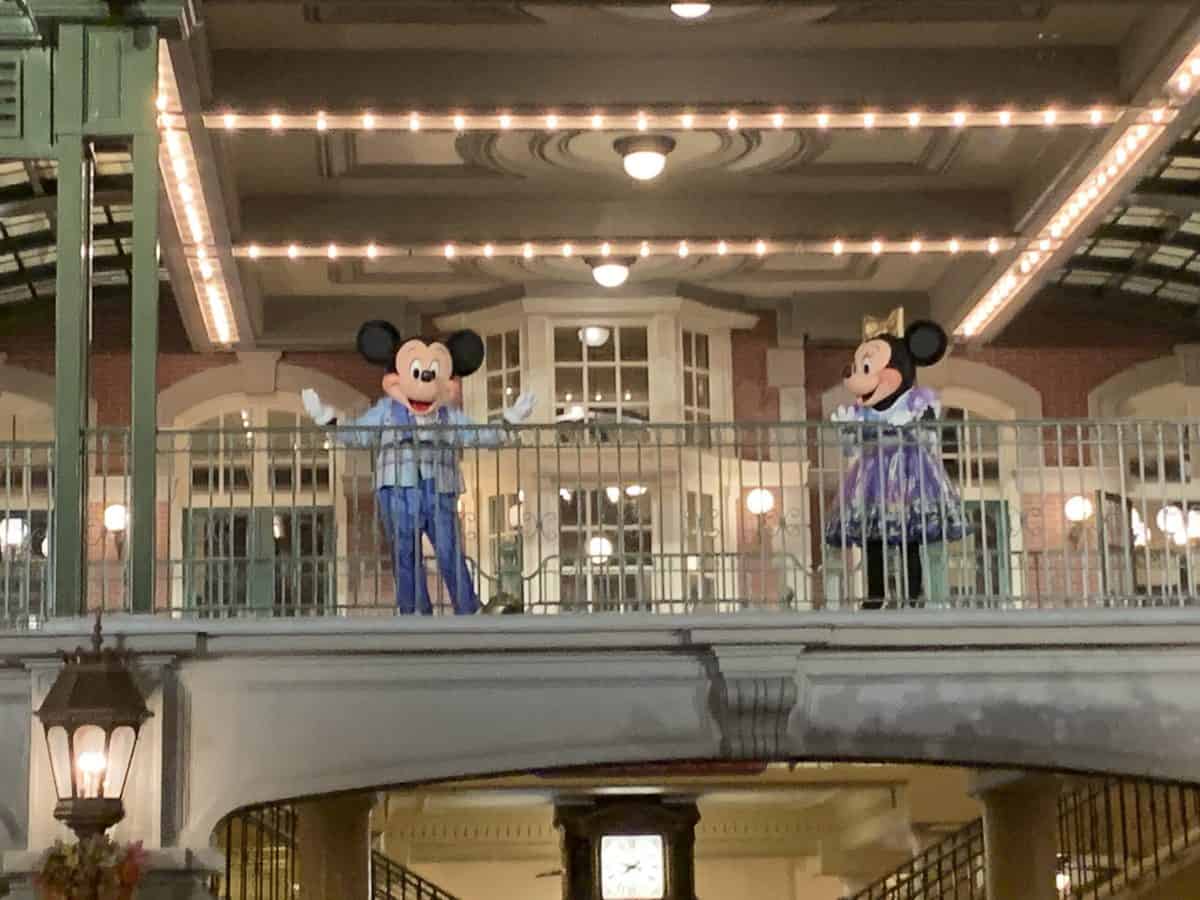 The Cast Members at Walt Disney World outdid themselves with the two day media event. I’d like to thank them for hosting me. The World’s Most Magical Celebration will continue for 18 months. It will be a party like only Disney can throw.